Doctor Who - Time of the Daleks 5th and 10th Doctor Expansion 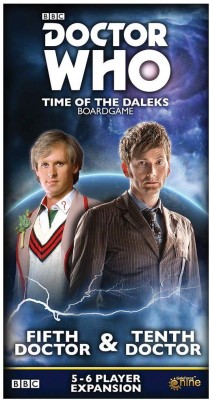 Forget battling the Daleks, the real fight is for who gets to play as David Tennant's Doctor.

A long, long time ago (possibly during another regeneration), I wrote my second ever review for Therewillbe.games. That review was for the (then) recently released Doctor Who: Time of the Daleks. Now, here we are, with my literally blowing the dust off of my copy of Time of The Daleks like The Doctor brushing cobwebs off his 500 year diary, to write a review of the “first” expansion. Well, I say it is the first expansion but a couple of “double set” of Doctors were released at the same time.

There was never a doubt in my mind as to which of the Time of the Daleks expansions I was going to pick up first: I'm a sucker for the 10th Doctor, David Tennishoes (As my daughter Piper used to call him) and I have always had a soft spot for the 5th Doctor. Peter Davison's time as The Fifth Doctor contained one of my favorite teaming of companions with Nyssa, Tegan, and Adric. (And, against all odds, when I was graced with twins in real life back in 2003, I didn't name them Tegan and Adric....Just Tegan and Tad).

The quality of the components in this expansion are both on par and a step-up with the original game. On the plus side, the new Doctor TARDIS consoles are a return to form for Gale Force 9. Gone are the thin, cheap-feeling ones from the base game. They have been replaced with the thicker player boards that were used in the likes of, well, every GF9 game up to this release. But now, when I look at the ones in the original game, I'm even more disappointed in them. Yea, I really would like them to be upgraded in a future expansion. 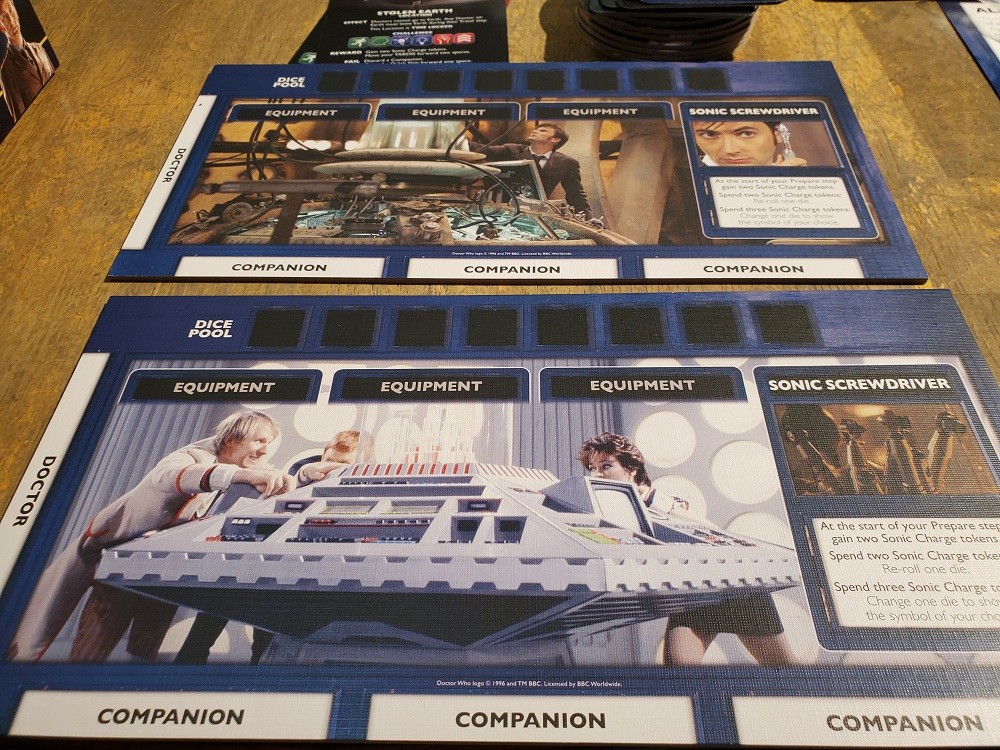 I was slightly disheartened by the David Tennant (10th Doctor) mini simply because it doesn't feature a flowing coat. The mini does have a cool, long coat but it is such an iconic visual of the 10th Doctor running with his coat blowing behind him that it would seem almost a requirement that any miniature of him would feature it. The minis in this particular expansion are on par with those found in the base game, if you were happy with those, these are of the same style and quality.

Some of the new components hit you right in the gut with emotional nostalgia. When you see the “Earthshock” card and read the fail penalty, it breaks your heart. “Either Discard One Companion or move the Dalek Ship ahead three spaces.” Oh my God, Adric...No, just no. Except, well, there are plenty of other cards that require you to discard a companion, which means it isn't quite the brutal (earth)shock it could be. And don't even get me started on what happened between the 10th Doctor and Rose...wait, where IS Rose? OMG, Rose is going to be in the 9th Doctor expansion isn't she? Well, that just feels wrong. Poor Martha Jones still doesn’t get any respect even if she is 10’s default starting companion. 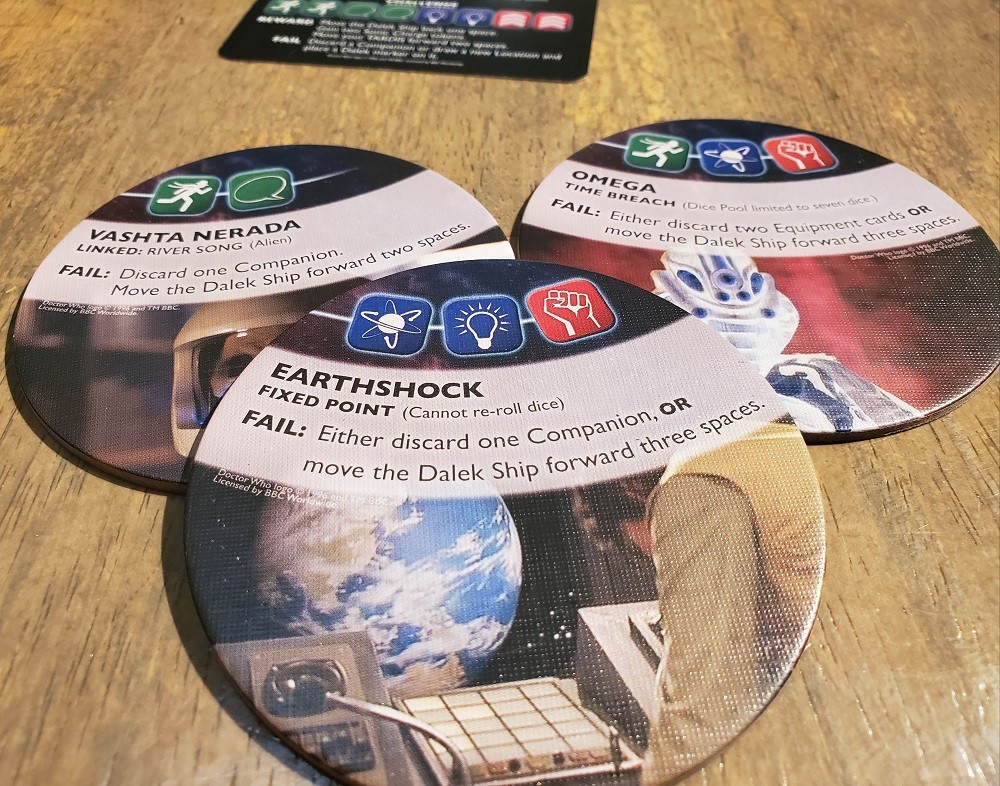 I loved that the locations from “The Five Doctors” were included and seeing some of the 10th Doctor’s “Companions who weren't really companions” are a treat. This means you can actually take Sally Sparrow aboard the TARDIS in the blink of an eye or create a run of adventures that never were with Christina De Souza. 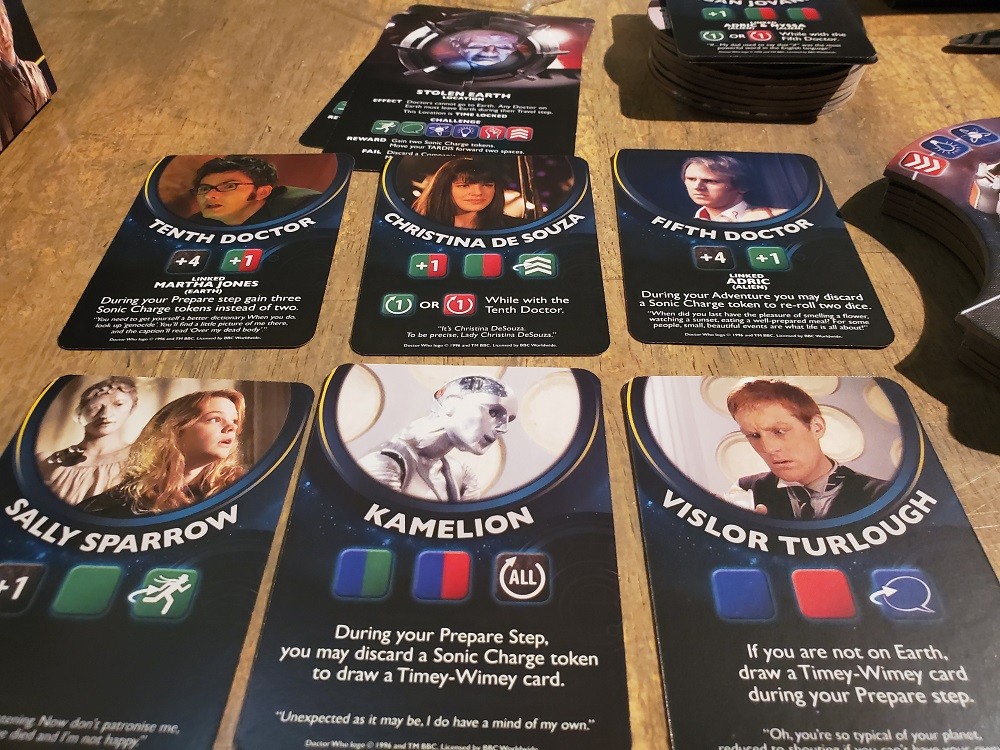 If the randomness of a dice doesn't quite give you enough challenge, some of the new locations such as “Rassilon” or “The Master Reborn” are instant action. The Doctor doesn’t get a chance to roll and attempt to overcome them, they just “happen.” The Rassilon location advances both the Dalek ship and the Doctor’s TARDIS, so it just races you to the end quicker but the Master Reborn is just a negative, unavoidable event. As a personal aside, I really dislike the “Forcing all the Doctor’s to regenerate” or "Discard all Equipment" penalties and it’s worse when it is something you can’t even dodge with some lucky dice rolls.Must be the Black Guardian meddling with the timeline again. 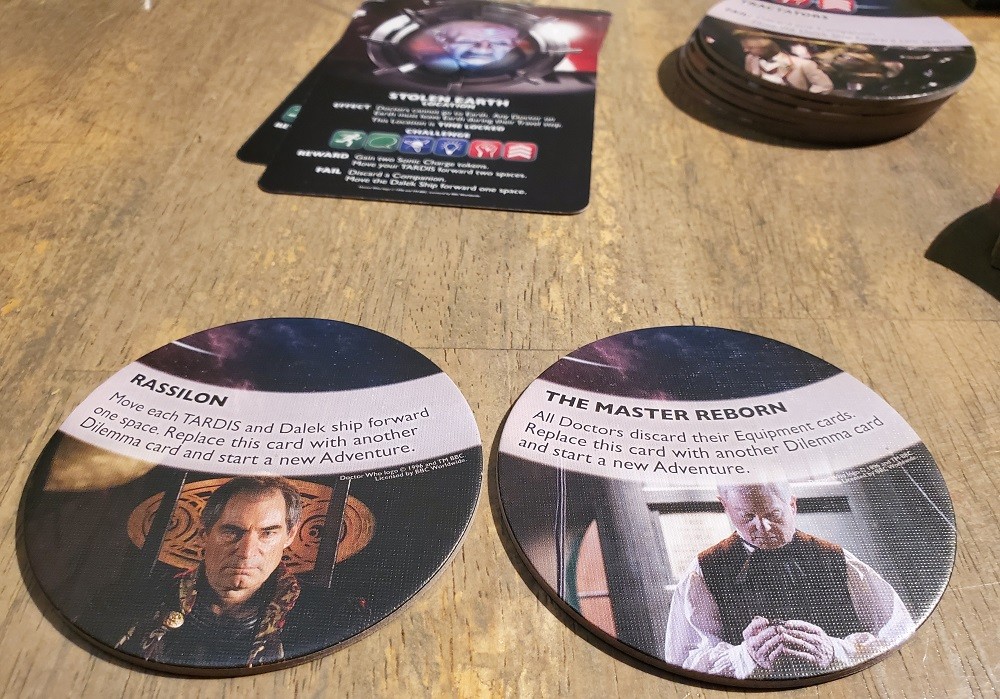 This expansion also allows you to expand the number of players from the default four players up to six players. As you can imagine, the play time does extend with the additional players and six players felt like it was pushing it to the edge of my time comfort limits.

The 5th/10th Doctor Expansion is the epitome of a simple “More Stuff” expansion. Some of the new cards do feature the Dalek icon that indicates they offer more than the typical challenge. But what you won’t find is the additional/optional rules or suggestions for extending/reducing playtime like those found in other GF9 expansions. But it did succeed in having me dust off my copy and put the TARDIS though it’s paces again...and now I want to rewatch the 5th Doctor’s episodes in their entirety.

January 08, 2020
Rating
4.0
Doctor Who-Time of the Daleks 5th and 10th Doctor Expansion
The 5th/10th Doctor Expansion is the epitome of a simple “More Stuff” expansion. Some of the new cards do feature the Dalek icon that indicates they offer more than the typical challenge. But what you won’t find is the additional/optional rules or suggestions for extending/reducing playtime like those found in other GF9 expansions. But it did succeed in having me dust off my copy and put the TARDIS though it’s paces again...and now I want to rewatch the 5th Doctor’s episodes in their entirety.
W
WadeMonnig Top 10 Reviewer 195 reviews

ubarose replied the topic: #307649 03 Mar 2020 15:44
I think this game has a lot of fans out there somewhere. People were super excited about these expansions. I even had people contacting me to ask if I had any inside information on when they would be released.

However, I was really disappointed in the base game and didn't bother to get the expansions. It was just too long for what it had to offer. It's too bad the expansions didn't come with any updated rules to address that.

Michael Barnes replied the topic: #307655 03 Mar 2020 17:10
Yeah, when this was first announced I was SO excited about it. GF9 doing a Doctor Who game and with ALL of the Doctors seemed like a can't miss proposition. But the game was just...a game. It felt rushed, perfunctory, and completely uninspired. It felt like a "bad" licensed game more than it did something like what GF9 did with their other properties. When the other Doctors were parceled out of it, I just lost all interest.

Somehow, I still have it but I didn't bother with the expansions. I guess I'll probably unload it soon.

Ah_Pook replied the topic: #307660 03 Mar 2020 22:29
If these expansions had come out when the game came out I would have bought them, even though the game wasnt really that great. Pretty easy to ignore them like 20 years later.

san il defanso replied the topic: #307661 03 Mar 2020 22:43
I'm more kindly disposed toward this game than it deserves, just based on the license. That said, I think a lot of my biggest beef with it is actually how thin on content the original game was. More Doctors is a good thing for this one.

It's still a game that never rises above pretty good, and with the low availability in Asian distributors I might never get this. But I would like it in theory at least.

WadeMonnig replied the topic: #307662 03 Mar 2020 23:13
Weird thing is that the miniature quality on the other expansion I picked up (6th and 2nd Doctor) is noticeably inferior to the ones in this expansion... but it included a Bill Potts card which was a nice surprise. I'll probably still seek out all the expansions but I don't hold out any hope they will be anything more than "more stuff"
Read More...