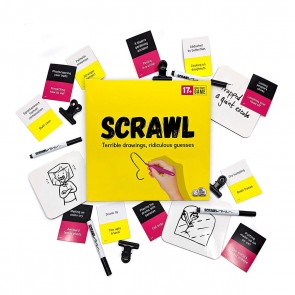 If you’ve listened to our Brainwaves Awards Show Special, you’ll know that I nominated Scrawl from Big Potato Games as my game of the year. This is a party game of Pictionary meets Telephone that requires absolutely no ability to draw. Frankly it’s probably better if you can’t.

Originally released in 2016 I had first played Scrawl when Tabletop Cafe was still open in Edinburgh. Whilst I had fun I’d kind of forgotten about it till this year. My regular group had grown in number and I was now seeking out games to potentially accommodate 7 players and I realised Scrawl fitted the bill as it would take up to 8 players and had a short play time.

Mechanically, its very simple. Every round each player gets a subject to draw. Once done everyone passes their masterpiece to the person on the left. The new owner of your work of art will look at it. Then at you with a mixture of disgust and confusion. They will curse your name and those of your family. The ritual complete, they will put a new dry wipe sheet on top of your picture and write a description of what they have seen

This new description now becomes the subject of drawing for the next person on your left. They will look at it. They will look at you with a mixture…..you get the idea. Drawing and interpreting is funny, frustrating and horrifying in equal measure as you try and decipher the scrawls, see what they did there, of the artistically challenged and sketch the words of those who have seen sights no one should see. 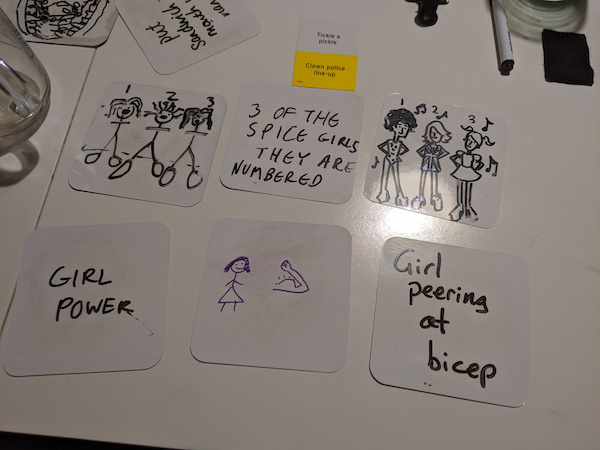 This did not go well. “3 of the Spice Girls they are numbered” is a personal favourite.

The real laughs come when your original work of art comes back round to its rightful home. One by one you will turn over your stack of drawings and words, commencing with your original sketch. You’ll look at it fondly, remebering each line and stroke like it was only ten minutes ago. With each card turned over your memories turn sour and dark as things inevitably take a turn for the worse. Each new reveal is accompanied by shock, laughter and people trying not to spit out their drink. Cries of ‘what’s that meant to be?’ and ‘you though this was what?’ resonate around the table.

Ostensibly there is a scoring system; points are handed out to those whose final words or art most closely resembles the starting prompt and for the favourite drawing or words each player likes the most. None of that really matters though as what you inevitably end up doing is playing until you feel like stopping.

I would say that if you are going to think about picking up Scrawl to play with the family that you should be a little careful with the edition you get. There are two available, the original from 2016, yellow box, and a version from this year, green box, that has less risque cards in it. Even then some of the subjects are a little on the nose for younger members of the family, but that may not matter to you. My only other caveat is that sometimes people dawdle when drawing so you might want to occasionally impose a timer as a bit of a house rule. 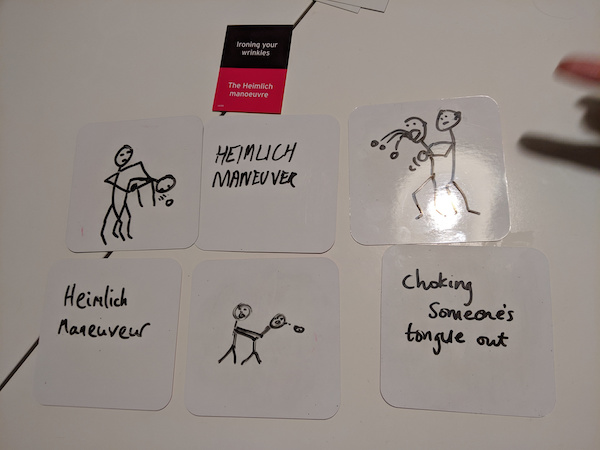 This took a dark turn at the last

Out of all the games I played in 2019, Scrawl has been the one I have had the most fun with. It’s not deep, clever or particularly well presented but it cuts to the core of the hobby for me. Having fun with friends is why I play games, and Scrawl is the purest distillation of that aim. Big Potato are a publisher that continue to impress and maybe if some of the larger companies that stand astride our hobby reached outside of the core demographic, we could truly think of board games as mainstream.

Ah_Pook replied the topic: #306131 14 Jan 2020 07:58
Is this just Telestrations? Because it really sounds like it from the description... I mean Telestrations is great don't get me wrong.

thegiantbrain replied the topic: #306148 14 Jan 2020 17:51
I have not played Telestrations so couldn't speak to the similarities. I think it is less structured than that game.
Read More...