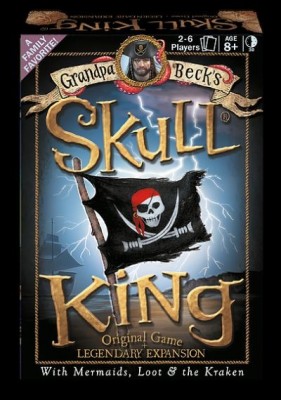 Publisher
Grandpa Beck's Games
Players
2 - 6
There Will Be Games

Pirates come in all forms. For instance, I had no idea when my package came from Grandpa Becks’ games that a pirate (my daughter) would shanghai Skull King out of the package and force me a cutlass point (or just bat her eyes) to play it immediately. Luckily, even when on the business end of pirates wrath (slight drumming of the fingers), Skull King is a trick-taking game that is easy as walking the plank to teach and a tropical breeze to learn.

Skull King isn’t just about how many cannons you are firing but about how accurate you are with them (Yes, I’m going to drag this pirate metaphor down to Davy Jones's Locker). Each of the ten rounds starts with you dealing cards to the players equal to the round number (One for round one, two for Round two, etc…). Then with a mandatory chant of Yo, Ho, Ho! Everyone bids how many tricks they think they will win with a show of fingers (insert Captain Hook joke here). If a pirate makes the number they bid, they score positive points. If they miss, they accumulate negative points. The challenge increases as more and more cards are dealt until the final 10th round. Knowing that your hand is horrible and you probably won’t take a single trick isn’t necessarily a bad thing because of the scaling points on bidding “Zero.”(+10 mutiplied by the number of cards dealt that round, so a zero bid in round 4 would be worth +40 points) Of course, that can boomerang with zero bids that fail to hit because you will LOSE that many points. 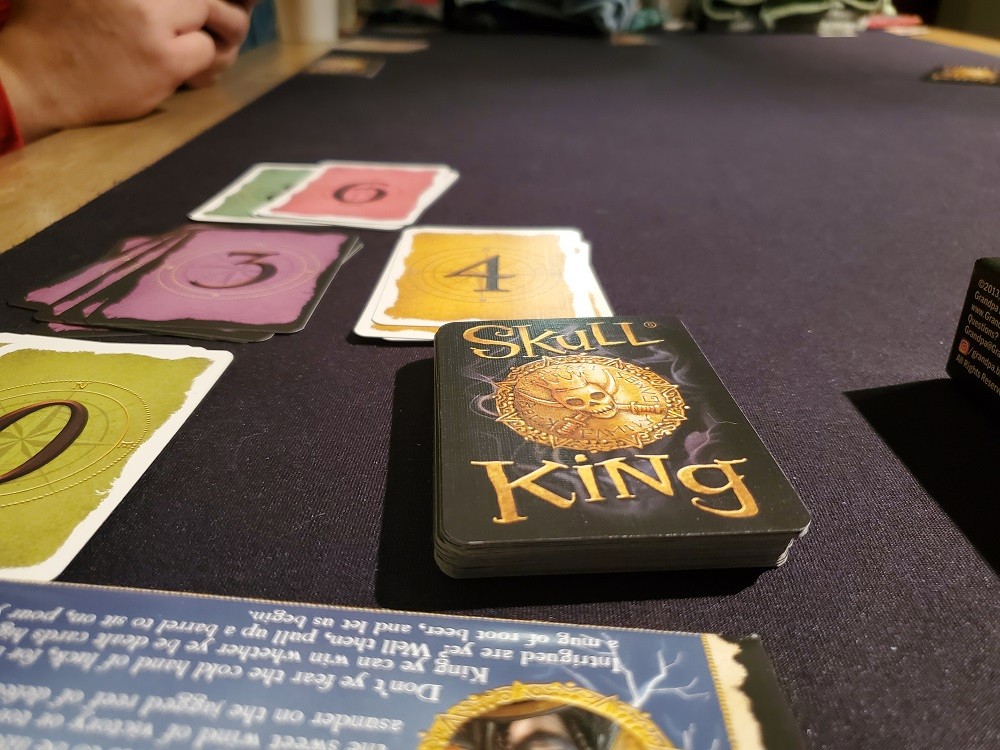 As a fan of Trick Taking games, most of what I found here was familiar: Three Basic Suits, a Trump Suit (The Jolly Roger suit), special cards that can beat almost anything (in this case, in the form of Pirates), and the (almost) all powerful Skull King Pirate. Cards have values of up to 14 in each suit. The more powerful cards (such as the 14) have bonus points associated with them. Capture them in a trick AND hit your target number of total tricks and you’ll score extra points. There are some cunning cards in the deck, such as the Surrender cards, which virtually assure that you will lose a trick by literally waving the white flag. The game moves along at a good clip, even factoring those moments where you need a few seconds to consider what is your best card to play in the current situation.

So, what slows the game down? The scoring. I know, I sound like a whiner but when you “score-up” 10 times per game it really stacks up. Especially if you are playing with 5 or 6 players because you essentially have to teach everyone how to score the game. You have to show them how to add in the special bonus for capturing different cards (and remind them that they must hit their target bid in order to get the bonus points), the varying penalties depending on what round it is if they bid “Zero” and this can take a bit of time. This becomes the most time consuming portion of the game. Sure, the more you play, the better it gets but with a family weight game like this, it can put new players off a bit.

Like other Grandpa Beck’s games, once you have the basics down, you can add in more rules and cards. In the case of Skull King, the Pirate cards all have secondary powers that you can use once you have the game itself down. And you can add in special cards, such as The Kraken which kills an entire trick which can just lay waste to EVERYONE’S bids. The Secondary Pirate powers are a cool...er...trick, but nothing on the actual cards hints toward what the powers are, so if you decide to use them, you must keep the rulebook handy and be prepared to pass it around the table...which can sour the surprise of playing them until you have them memorized. And then you have the Pirate Juanita Jade’s power is to let a player winning a trick with her to look through all the cards not dealt this round...which is great for that player but none too entertaining for everyone else. 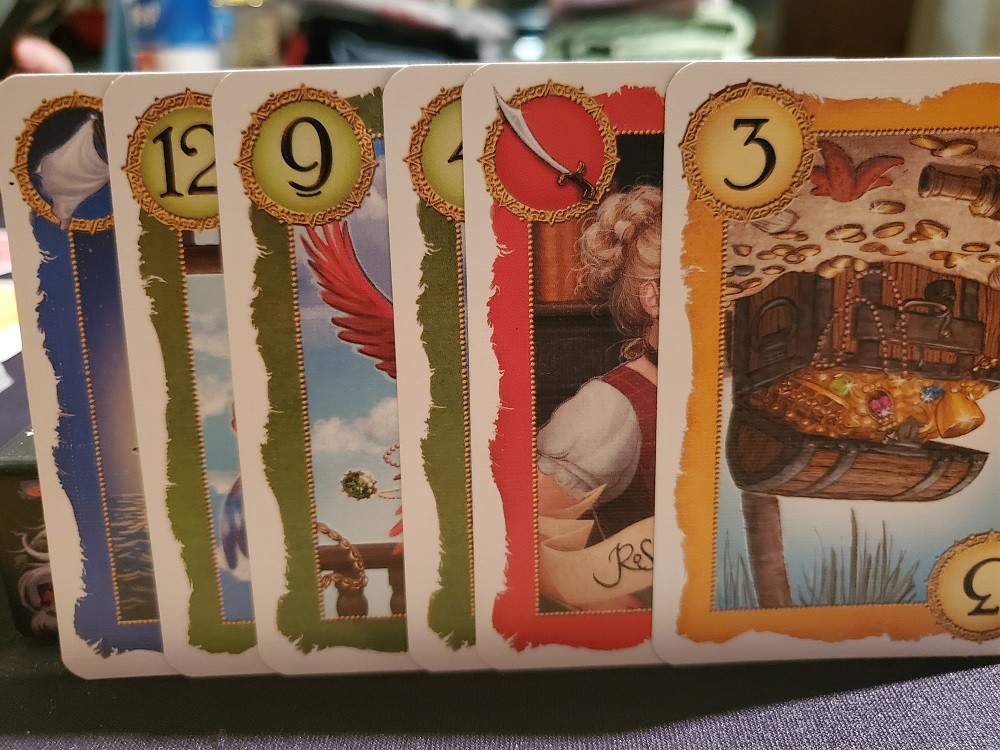 Skull King is one of the better trick taking games I have played. The wide range of player counts (two to six) it accommodates is a definite plus. It is something new to break out that has the appeal of the familiarity of trick taking with the flush of something different because of the unique/eye catching deck and varied power cards. And the bidding mechanism means there is more to it than simply getting dealt the best cards. It’s a favorite of Pirates, even those landlocked here in the states. Savvy?

January 21, 2020
Rating
3.5
Skull King
Skull King is one of the better trick taking games I have played. The wide range of player counts (two to six) it accommodates is a definite plus. It is something new to break out that has the appeal of the familiarity of trick taking with the flush of something different because of the unique/eye catching deck and varied power cards. And the bidding mechanism means there is more to it than simply getting dealt the best cards. It’s a favorite of Pirates, even those landlocked here in the states. Savvy?

Jackwraith replied the topic: #307066 12 Feb 2020 13:26
Wait. The pirates (i.e. central theme of the game) have extra abilities that aren't printed on the cards...? Doesn't that seem like a rather basic production requirement utilized by card (or card-oriented) games for, oh, 45 years now (CE)?

I'm not a huge fan of trick-takers. I was pretty good at Euchre, as my old business partner and I used to lay waste to everyone we encountered, but didn't really enjoy the game. Having to constantly consult a rulebook during one would be an automatic deal-breaker.

WadeMonnig replied the topic: #307069 12 Feb 2020 15:03
In the games defense, they are secondary/advanced powers that aren't used until you decide you want to. They were added in the expansion, i think adding them to the cards, even in icons, might confuse more than be helpful. I rarely use them myself.
Read More...