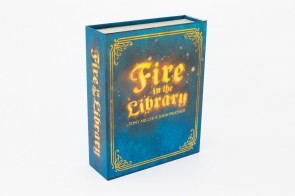 If you have ever had the misfortune of lurking in any of the Facebook Boardgame Groups, about once a week someone will post the hypothetical question of “If your house caught on fire, what game would you save?” But what did people ask before boardgames existed: what hypothetical questions did they fill their social media lives with? Maybe it was the premise of A Fire in the Library.

As you may have ascertained from the game title, there is a library and it has caught fire. Lacking the proper bucket brigade training, you and your fellow librarians run around, willy skelter, snatching up books and trying to get them out in one smoldering piece. Each trip into the library to save books is represented by pulling cubes from the snazzy fire bag. Pull a colored cube from the bag, and you rescue a book of that type. Pull a (red) firecube from the bag and things heat up. If you are lucky, you pulled that first fire cube when trying to fill a normal or “Safe” space on your player board. That just means “And you make it out with the books a little crisp around the edge.” Unless you press your luck, jumping back into the fire to try to save another novella. Pull a second fire cube and the result is more L.A. Woman by The Doors. And, more tragically, not only are all the books you are carrying destroyed but then the fire spreads...and grows.The growing fire is represented by tossing even more of the fire cubes into the bag, further reducing your odds of drawing a book to save. 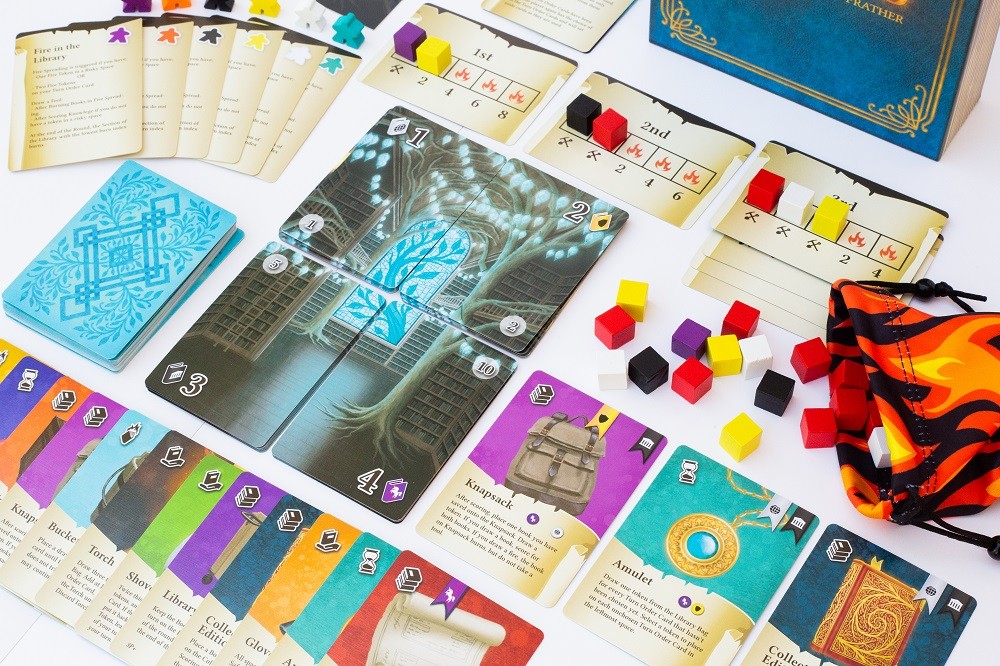 Books are worth different points and that changes as books are destroyed: Each time a type of that book is lost, it raises the point value of those of that type that remain in the library. There are more of some categories of books than others which creates an interesting dynamic of “betting” on how much one is going to be worth at the end of the round, or in some cases, at the end of the game.

A Fire at the Library centers squarely on pushing your luck, but, at the beginning of the game, you are given two tool cards which can help mitigate bad draws from the bag. They include a variety of things such as Maps (Geez, how big is this library?), Lockboxes, and Shovels of the Smokey the Bear variety. Putting a book into a lockbox means you get to score it a second time at the end of the game, which is where betting which type of book will be the rarest (and thus worth the most points) factors into your strategy. The obvious advantage of going first in a round is counteracted by variable player mats that compensate for where you fall in turn turn order. After the first round, the player with the least number of points gets to choose where they go in the turn order and what sort of risk/reward chance they wish to take by selecting from these. The higher risk cards provide Heroic points for Librarians that attempt to fill them with books but also feature more of the dangerous/risky spots on them (where a single fire cube will incinerate every book you have collected that round). Don’t worry, there is still chances for everyone to get more of those nifty Tool Cards (both from spaces on the player mats and for stop, dropping and rolling when all your books burn during a round). 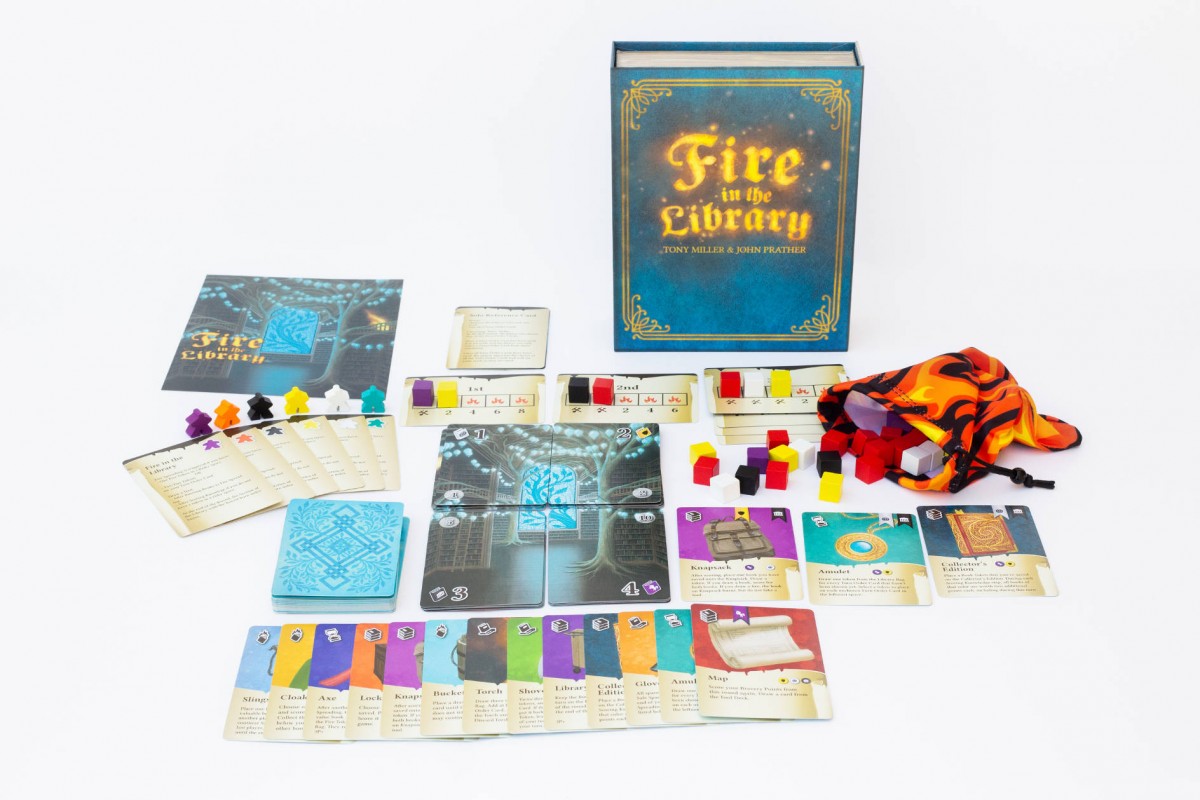 The entire game box is shaped like a book and that the inside cover of the “book” is the scoring track and it all locks closed with a snappy magnet. The game “Board” consists of four cards representing the types of books and show the fire spreading as you reveal each one until one area of the library topples and the game ends.

A Fire in the Library might be a relatively simple push your luck game but it is way more fun that it has any right to be. Radical point spreads are to be expected and just as radical come-from-behind victories should be expected as well. The low-key strategy mixes well with the high-key luck aspects to deliver a fire hot experience. It is certainly more fun than playing “What Board Game would you save from a fire?” Or the social media sequel “My Goodwill doesn’t have shit for board games.” (Where you sift through endless versions of Scene It searching for a copy of Diplomacy).

February 01, 2020
Rating
4.0
A Fire in the Library
A Fire in the Library might be a relatively simple push your luck game but it is way more fun that it has any right to be. Radical point spreads are to be expected and just as radical come-from-behind victories should be expected as well. The low-key strategy mixes well with the high-key luck aspects to deliver a fire hot experience.
W
WadeMonnig Top 10 Reviewer 195 reviews

In our home we have smoke detectors which actually announce "Fire! Fire!" is a strange robotic voice in between the chirps and sirens. We have become quite familiar with this due to my less than expert cooking abilities. Last night we discovered that Zoe can do a perfect imitation of this voice. So every time someone pushed their luck too far, she'd do her "Fire! Fire!" impersonation, which was funnier than it had any right to be.

It made me think about how when you play a game often with your family or the same group you sometimes develop these kinds of little rituals, like chanting "Toad" in Talisman when someone rolls. And how these can make a game more special than it sometimes has the right to be.

Sagrilarus replied the topic: #315250 16 Oct 2020 12:18
I've played another game about a fire in a library, but I don't recall its name. I think its set in Roman times, something ancient at any rate. A lot of browns and orangy reds. There was a traitor, a woman intentionally spreading the fire. An odd subject to have two games about it.

I used to study in Patee Library at Penn State and I'll tell you what -- a map would have been mighty useful. Students had marked the walls with chalk arrows pointing to the way out like spelunkers do.

The one you describe sounds like it may have been inspired or maybe actually about The Great Library of Alexandria. I'll have to do a search when I am not at work with everything blocked.

WadeMonnig replied the topic: #315260 16 Oct 2020 13:50
I would occasionally yell out "Fiber! Fiber! moke moke moke!" Which is a call back to my childhood friend who would do comedy bits to Crack us up. In this case it was a guy describing the drilling of a tooth with his mouth Numb from Bill Cosby.

The one you describe sounds like it may have been inspired or maybe actually about The Great Library of Alexandria. I'll have to do a search when I am not at work with everything blocked.