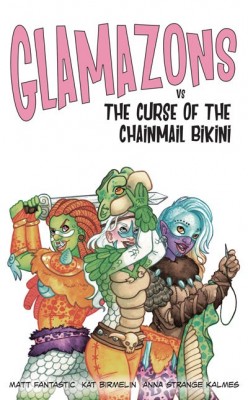 We are gathered here today to mourn the loss of a punchline. Like Duke Nuke'em Forever, Glamazons has taken the wind out of the perfectly good Kickstarter/Vaporware joke by actually delivering on their product. (And why do I think that Killjoy is probably smirking seeing Glamazon's mentioned in the same paragraph as noted feminist Duke Nuke'em?)

Doing what Killjoy does best, Glamazons adeptly skewers a variety of stereotropes with such precision that you start to wonder if maybe you are just reading too much into it. Example: The premise of the game is that Glamazon's are tired of useless armor designed by “tasteless medieval blacksmiths.” Granted, this isn't exactly shining a new spotlight on the dark reaches of Medieval fantasy sexism. Pretty much every Conan novel cover and piece of classic Dungeon and Dragons artwork would have you convinced that Female Warriors were doing damage with 2 “DD's” instead of 2d6...all while laying on the ground and seductively stretched out. 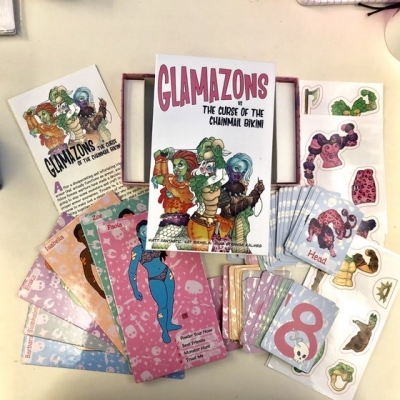 But Glamazon's went next level in my psyche with the peel and place armor that you put onto the Glamazons:
“So, you are dressing them up like paper dolls? (Unsaid: Like little girls do).
“Well, they are peel and stick like Colorforms.”
“Colorforms?”
“Yea, don't you remember those? Like the Spiderman and Hulk one's from when we were little, where you could create your own fights? The ones where all of Hulk's Enemies were green because they were too cheap to print them in another color?”
“Oh hell yea, I loved those!”
“Yea, so, you are dressing them up like you used to do when you were a little boy.”
Touche' 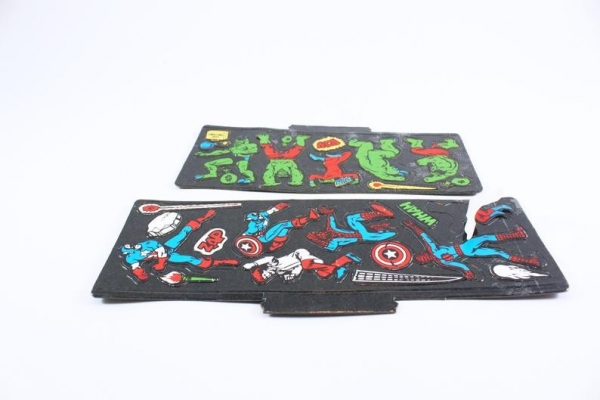 Colorforms: Who uses the same colors as Spiderman? Captain America? Ok, use him.

Leaning hard into what is probably considered traditional “Little Girl Terminology” you powder your nose (make sure you have two cards in your hand), pick out your BFF (Best Friend Forever) from a deck, and head out to make small work of some stylish monsters. Your BFF plays a card, stating what damage it is (From 1 to 8). You either say “I trust you” or call them out. If you trust them, you then you play a card of your own, stating what damage you did (from 1 to 8) and whoever did the most damage reaps the reward of killing the monster and turning it into some swanky armor. The first player to assemble a full set of armor, wins the game. 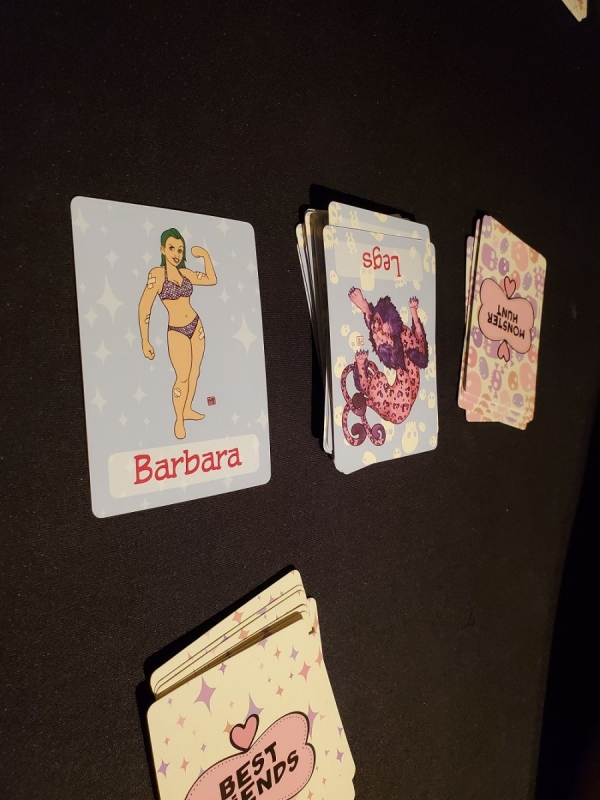 Of course, the core of the game is the “Trust Me” step. Like Coup, a player can claim to have any card.
But if you or your BFF calls the other out, you must reveal the card. If you or they were lying, you not only lose the armor from the monster you were fighting, but they also snag one of the armor pieces off of your board and you are required to take a shot of Fireball.
Phone rings in the background
Excuse me, one second.
“Hello, yes? What do you mean that is not in the rules? Are you sure? That is always the way we have played it. Fine, well, when DO you take a shot? What do you mean there is not supposed to be alcohol involved? Hmmm,well, that DOES explain why I kept claiming I was playing a 9 and everyone called me out on it. Thank you. Scribbles on paper “Tell Killjoy to upload drinking rules.” 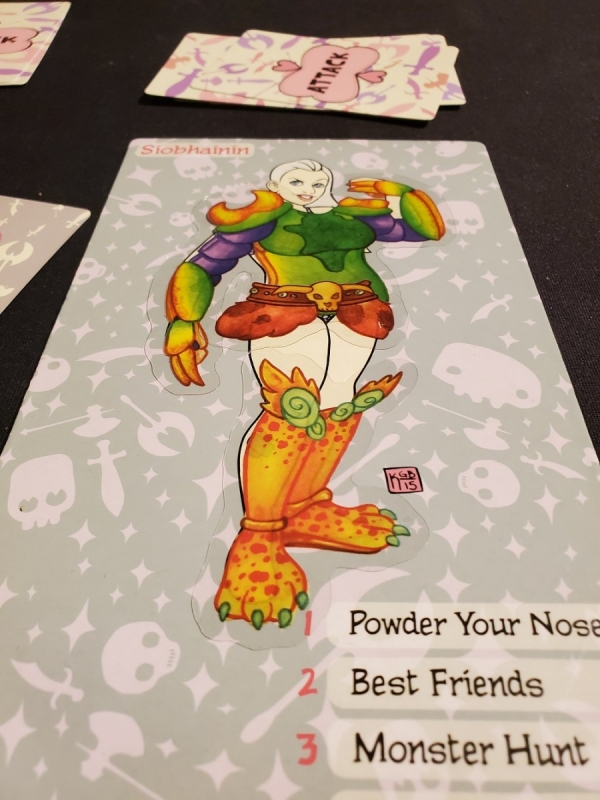 Lost to a 6 year old

Matt Fantastic put on his prettiest dress to sprinkle Cosmic Encounter pixie dust along with some Coup glitter into a princess potion that embraces a “girly” theme at the exact same time it sweeps the legs out from underneath decades of ogling the female form over function armor. And if you reading this review Matt, I have two words for what should be in your next game “Shrinky MF'ing Dinks.” 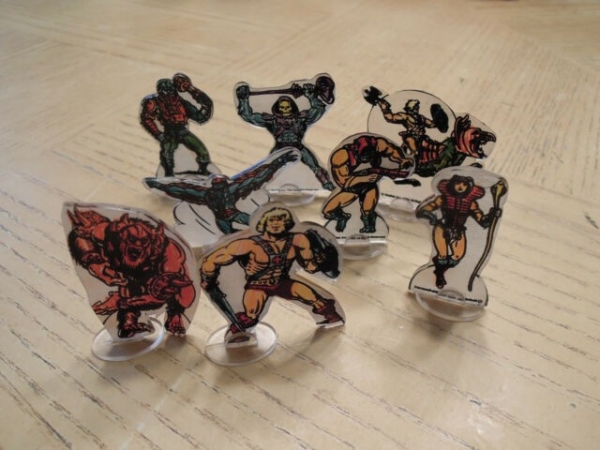 I await your response as breathlessly as when I awaited the responses to determine the starting player in Glamazon: “Whoever last played dress-up goes first.”

February 05, 2020
Rating
3.5
Glamazons vs The Curse of the Chainmail Bikini Board
Matt Fantastic put on his prettiest dress to sprinkle Cosmic Encounter pixie dust along with some Coup glitter into a princess potion that embraces a “girly” theme at the exact same time it sweeps the legs out from underneath decades of ogling the female form over function armor.
W
WadeMonnig Top 10 Reviewer 195 reviews

There are no user reviews for this listing.
Already have an account? Log in now or Create an account
Discuss this article
Log in to comment
Posts in discussion: The Glamorous Life: A Glamazons vs The Curse of the Chainmail Bikini Board Game Review

WadeMonnig wrote: Despite what the review may imply, the six year old I lost to was not required to take shots.

Anyway, haven't broken mine out yet, but this makes it seem awesome. And man where my ARKHAM shrinky-dink dudes to go in all these standees?

Josh Look replied the topic: #306988 10 Feb 2020 13:54
I wrote an article about Intrigue years ago that, while writing it, I kind of made up my mind about what makes a design great instead of just good at best. If you’re going to make a game in X genre, make sure you do X as best you can and don’t dilute it with too much unnecessary, unrelated bullshit, regardless of whether or not it makes the game more “thematic.” Really zero in and make that one thing you’re trying to do be the focal point of the entire design and the takeaway will be so much clearer and more pronounced. The games that do this are typically looked at as one of if not the best in their genre. Needless to say Intrigue is such a game and this was the moment I decided I was going to die on my “less is more” hill.


I’m fairly certain that article had an effect on Glamazons. I remember Matt liking it and the first time hanging out with him after publishing it, which was only a couple weeks later, he’d had his first Glamazons prototype. I had no idea what I was getting into when I sat down to play it, but it quickly became clear that Matt gets it. All of his designs have this very small mechanical footprint and whether you come away liking the game or not, there’s no confusion about what the game set out to. Glamazons is to bluffing games as Intrigue is to negotiation: It’s pure and the takeaway is so strong because the bluffing is delivered in such a concentrated dose. It also just so happens to have an interesting takedown of outdated fantasy tropes and fun Colorforms to play with.

I still really enjoy this game, happy to finally own it with its new artwork (which I actually prefer) and proud of Matt for designing it and getting it made.

Jackwraith replied the topic: #307005 10 Feb 2020 23:04
Excellent. (But, seriously... Fireball? If you're going to encourage underage drinking, at least coax them toward something that won't give them a sugar crash along with a hangover.)

WadeMonnig replied the topic: #307009 11 Feb 2020 04:00
Lol it was originally just shots but I added Fireball since it sounded good with shots. I anticipated backlash for using such a cheap, cesspit liquor.
Read More...