The Oncoming Storm: A Chrono Corsairs Board Game Review 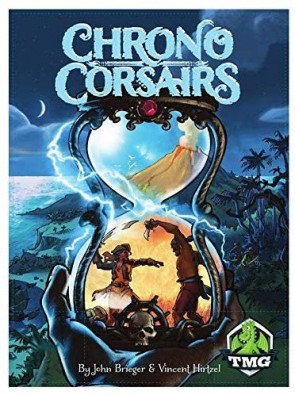 Chrono Corsairs is about a group of pirates being caught on an island in a time storm, reliving the same day over and over, remembering everything and trying to secure the most time crystals and treasure by optimizing their movements and actions with cards. At the beginning of each day, they are returned to the ship floating in the harbor to begin their quest anew. Welcome to...wait for it….Groundhog Bay. Come on, how could I resist that horrible pun/joke?

I assume this title is called Chrono Corsairs because if they would have named it “Time Pirates” they would have gotten some serious side-eye from Terry Gilliam. Normally, when I sit down and fully read the instructions before starting a game I get a feel for what type of game it will be. Chrono Corsairs gave me only the barest hint of how it was going to play out. “Gather Time Crystals” is the goal but how do you go about this? This is mostly because most of the information is on cards, tokens, or the board itself. More importantly (for replayability) is that this information changes from play to play. So, be prepared for a “practice” game where everyone gets a real feel for how the game progresses, how bad events happen at the same time (and same place) over and over...and how to avoid them (which is definitely shades of the Tom Cruise Movie “Edge of Tomorrow”). 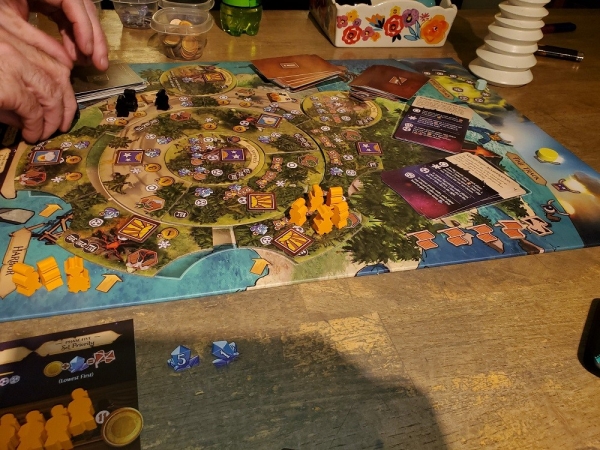 So, Is it Corsair Control? Pirate Pillaging? Is it simply a snatch and grab of treasure? (ummm, snatch and grab mean the same thing...so, sneak and snatch? Gallop and grab?) With the unspent dubloons you earn disappearing at the end of each day, it’s never a matter of stocking up on those. However, the time crystals that serve as victory points remain from groundhog day to groundhog day. So, you do that well worn dance of “How long should I earn treasure to build up my crew and items before switching to only snagging Time Crystals (Victory Points)?” 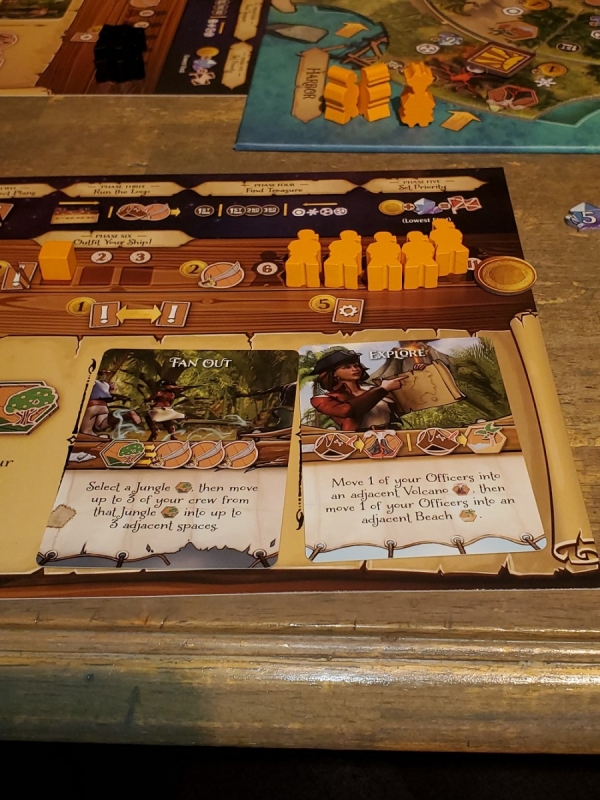 The resetting of each day seems novel except, well, plenty of games reset the board at the end of each “Round” So, the real novelty is the cards that allow you to NOT reset but fight against the time storm and hold positions from Round to Round. Usually, only your officers can move with the rest of the crew doing a Lost Boys “Following the Leader” act. So, you leave a trail of rum drunk sailors in your wake to hold down positions and, hopefully, claim the reward at the end of the day for having a majority in that area. 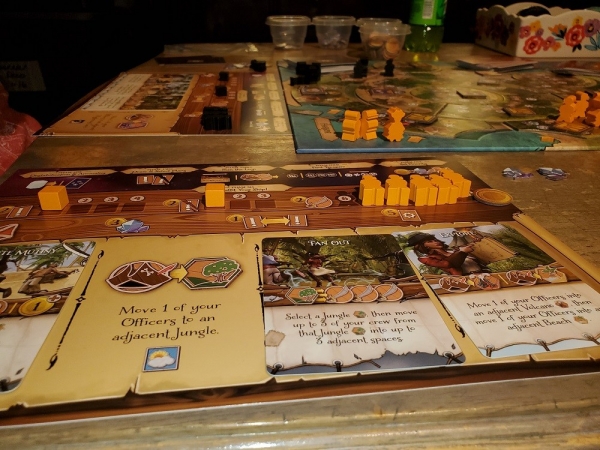 Each round/day you replace one of your time of day movements with a stable or unstable card that you have drawn. The Unstable cards accelerate the game further towards its end by destabilizing the Time Vortex. (In a normal round, the vortex destabilizes by one click, if any player plays a Unstable card, it becomes two clicks) The Unstable cards are, while not exactly more powerful, are usually more confrontational with the other players.

The time storm (Hmmm, maybe they should have called it The Final Countdown (and gotten some serious side eye from the band Europe) will always have you trying to think 3 or 5 moves ahead at the beginning of each round, since your opening movement sets the stage for the rest of the day. So, someone cue the analysis paralysis armada. And as cards are added in and event chits are triggered, you should plan around them (Someone call in the metal blockade reinforcements). Not to give you metaphor whiplash, but suddenly everyone at the table looks like Doctor Strange calculating 14,000,605 different paths looking for the best possible outcome. And don't forget to factor in the anomoly card that you flip every round to add in a bit more flotsam and jetsam into the timestorm with a modifier that only is used that round. Of course, your mileage may vary on the AP and,luckily, the decisions happen simultaneously for all players since everyone is planning that first turn at roughly the same time. 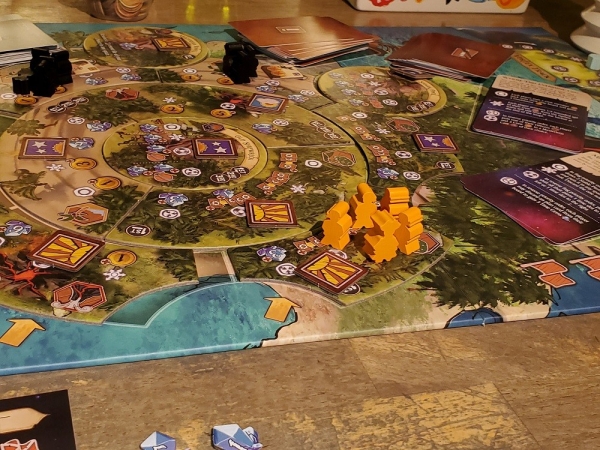 The not insignificant learning curve coupled with gameplay that doesn’t make it exactly stand out in a crowded field can make it a hard sell for getting table...err...time. I love the novel concept but no matter how many times I dived back into the time maelstrom, the game ended up (re)playing out like a typical area majority game set on repeat.

February 11, 2020
Rating
3.0
Chrono Corsairs
The not insignificant learning curve coupled with gameplay that doesn’t make it exactly stand out in a crowded field can make it a hard sell for getting table...err...time. I love the novel concept but no matter how many times I dived back into the time maelstrom, the game ended up (re)playing out like a typical area majority game set on repeat.
W
WadeMonnig Top 10 Reviewer 195 reviews