Aww, You Noped My Battle Pope: A Pope Or Nope Board Game Review 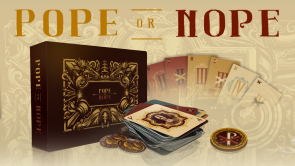 I have always threatened that one day I would write a single word review of a game. Today is that day.

Okay, I truly don’t get the “theme” of this game. You play as a possible successor to Pope Peter II, (The pope phropetized to be the last pope before the apocalypse). So, I’m wanting to be the pope after the end of days? Uhh, okay. I’m really just not sure what the angle is? Who is the target audience here? Are they aiming for Catholic players? Fallen Catholics? Pissed off Agnostics? Rueful Atheists? Whatever the gist is, you can color me confused.

Crosses and Popes and good deeds, oh my. At the beginning of a round, you are dealt 5 cards. The premise is that you do good deeds (by playing a single Good Deed card) that moves you toward becoming the Pope. I’m pretty sure that isn’t quite how electing a pope actually works but maybe if you burn the cards and the smoke comes out white...

Anyway, you can also sabotage other Cardinals' good deeds and cancel them out. Sounds like some real saintly behaviour. In most rounds, you have the chance to score a single point with your good dead. This is where the game degenerates into Munchkin in a Mitre. You know that last, weakest point of Munchkin where everyone plays a card to try to stop someone from winning? That is the game, every round, with players playing whatever cards they are dealt on whoever they can in an effort to stop them from getting a point. And at least Munchkin has the decency to make you run out of cards, where Pope or Nope gives you five cards every round. You can also play a Draw Two card that lets you pull two additional cards to play or use a card to add a new, second good deed card for others to try to cancel out.

The game pulls this weird, out of context quote from Romans “Do Evil, so that good may come.” I guess that is supposed to justify the players sabotaging others' good deeds. I don’t know if this is some backhanded slap at corruption in the Catholic Church...but it feels out of place in basic card game. Fuck it, how about you double down and make a game where you draw lots for the shroud of Turin?

The First player to five points wins. So, it is a matter of playing cancels, adding new deeds to canceled deeds that are one level lower and, sometimes, points are scored in a round. The Pope card acts as an all-powerful Deed that can only be cancelled by the “Nope” card. Yep, only a Nope cancels a Pope. Isn’t that Dope? *sigh *

With the minimalist scoring system and constant canceling of points, Pope or Nope doesn’t even have the decency to finish in a timely manner consistent with its style. In catholic terms, you wish it would wrap up around the time of the homily but, just when you get to the dismissal, they throw in some stations of the cross.

The most fun I had with Pope or Nope was coming up with fictitious taglines for the game.
“Silent as a church and almost as fun!”
“Perfect for Easter/Christmas catholics! You’d only have to play it twice a year.”
“Bishop to GoodDeed8! Pope Me!”
“Awww, you noped my Battle Pope!”

You may be asking “Why am I reviewing this?” I blame the asterisk. There was a cute little bit in the description that said “The first to 5 points wins and may don the Papal Mitre.*
*sold separately” Unfortunately, that was about the only fun thing about this title.

There are no user reviews for this listing.
Already have an account? Log in now or Create an account
Discuss this article
Log in to comment
Posts in discussion: Aww, You Noped My Battle Pope: A Pope Or Nope Board Game Review

What publisher would spend the time to vet, develop, and test a game like this?

Jackwraith replied the topic: #308251 18 Mar 2020 09:59
This is one of those moments where I feel certain that reading Wade's review is a lot more fun than actually playing the game.

WadeMonnig replied the topic: #308270 18 Mar 2020 16:00
Honestly, this is one of those all too frequent games that seemed to have been kickstarted or concieved in an echo chamber. I always think "Someone should have told you this isn't fun" and I'm just confused about the point or theme.