One Small Step for Stellar Kind: A Stellar Leap Board Game Review 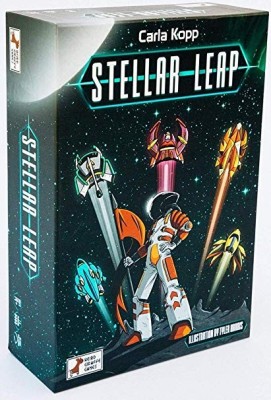 Outer Space seems to be the perfect setting for a 4x Game. Who isn’t itching to “eXplore, eXpand, eXploit, and (go full Dalek) eXterminate” in the infinite expanse? But is Stellar Leap a 4X game? Hmmm...Maybe.

The core of the game involves each player rolling two dice and manipulating them. Manipulation can be done by a player's personal power card or by using the universal power card available to everyone. Each planet or asteroid is placed by a player in a slot numbered 1 thru 6 on the galaxy board. Rows (or planets) are activated when either the die shows that face the they are under or is the total of the two dice added together...but since you always roll two dice, wouldn’t the odds be with you if you put your planet on the “6” space? This, and a few other reasons, led me to feel like it was more “Machi Cosmos with Manipulation” than a 4X title braving the last frontier.

Stellar Leap does, technically, having the “eXplore” where you reveal and place new planets or asteroids onto the board but it literally just involves flipping over a new planet, marking it “discovered” with a chit and setting it up under a number. You can also “eXpand” by moving population to different planets, allowing you to secure resources from them if their number comes up.

I do really like how Stellar Leap does the “eXploit” option. It has this great mechanism where you put a die on an asteroid card when it is revealed and, every time it is mined, you roll the number of dice shown by the pips. The highest result is added to your haul of items from that asteroid. The die is then decreased by one to show diminishing resources. I absolutely love this idea and the execution.I just wish enough dice were included so that you didn’t constantly run out of them to either place or roll.

As for the “eXterminate” or Combat….Well, combat isn’t really combat. It is more of a playground shoving match. You don’t lose population when you are defeated in combat, you just get “pushed” off the planet to a neighboring planet. Like “This planet is overpopulated and I’m getting less resources, so “Bang, Zoom! Straight to the Moon with you, Alice!” Are the booted population exhausted when they get there? They should be since they apparently flapped their arms and flew there. There is no resource cost for retreating to another planet. You almost expect a “Thank you” from other players for the free movement if you “defeat” them. And the only real worthwhile reason to engage in combat is if your Trait card says you get prestige (VP) from doing so.

The problem with Stellar Leap is that It doesn’t really feel like space exploration, it is just sort of moving the cubes on your Food, Fuel, Oxygen and Water settings. And you generally just want a ton of all of the items because you never know what is going to need to buy some victory points and the game doesn’t make resources particularly hard to acquire. Even purchasing the goal cards gives you some resources-Meet the future: we have green stamps.

Stellar Leap also has “Species Trait” cards for every race that are randomly dealt to players at the beginning of the game. But choose wisely in this “Pick one, discard one” opening gambit. Unlike “Gain Bonus VP” cards in other games, it doesn’t give a gentle nudge in a general direction. Instead, it gives bonuses that are on par (or above par) with every other VP gaining action in the game. If you are being rewarded with 3 bonus VP for every new planet you discover and you only usually get 2 or 3 VP for every planet, you would be foolish not to be taking small steps on every piece of terra nova you can.

The game does have some cool artwork but just not enough of it. The player mats are great but the planets and goal cards are bland. Most of the goal cards just have a vaguely familiar sci-fi quote on them and nothing to make them really “pop.” 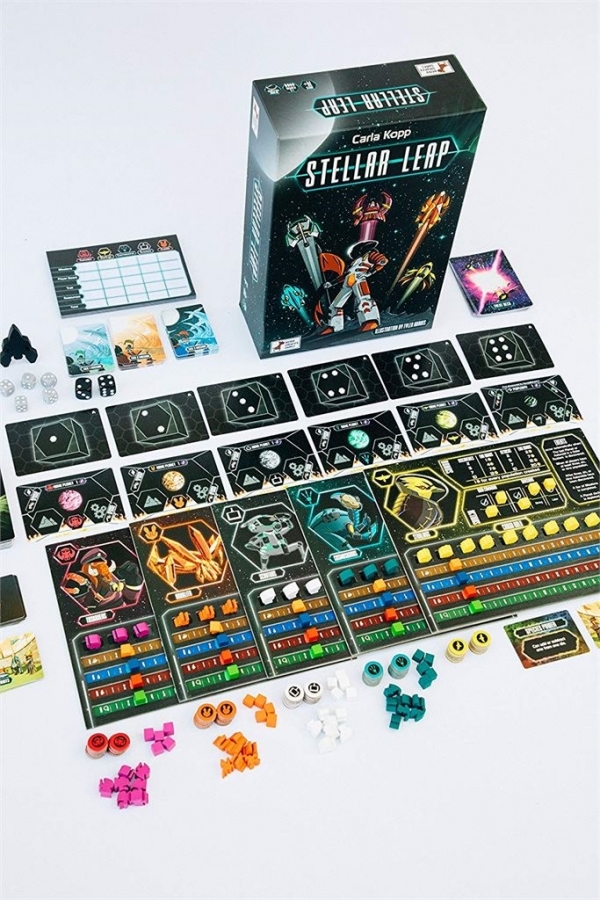 I love some of the things that Stellar Leap does (the asteroid mining mechanism) but in a crowded Galaxy of space themed games, it doesn’t blast out to the front of the space race.

February 15, 2020
Rating
3.0
Stellar Leap
I love some of the things that Stellar Leap does (the asteroid mining mechanism) but in a crowded Galaxy of space themed games, it doesn’t blast out to the front of the space race.
W
WadeMonnig Top 10 Reviewer 195 reviews

"Lessee, an essential aspect of this game is new planets and I can double my points for finding them with this card..."
Read More...