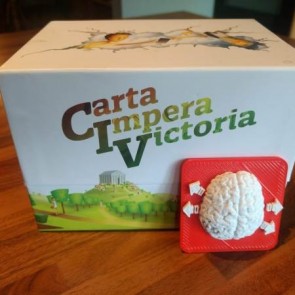 “Rome was not built in a day, but they were laying bricks every hour”. Ok so we aren’t going to build Rome, but we are going to build an entire civilisation in a lunchtime and we will do it however we want. Want to rule on high from a military junta? Use Religion to establish your moral superiority or Culture to win admiration? Negotiate from a place of Economic strength? Push the frontiers of Science to get to the Utopia you know your people deserve? Well you can in Carta Impera Victoria (CIV), and in only 104 cards or less. And a nice coin.

I like to try and cover a wide variety of game styles and themes in my collection with as little overlap as possible. I’ve been thinking about buying a Civilisation themed game for some time, but most are too long for my typical game sessions.

Cracking the seal on CIV, I immediately noticed how luxurious it feels. The box is made of nice, thick cardboard with that lovely matte finish and the art is simple but evokes the theme well. Along the side of the box are little buildings and as you lift the lid they change from being religious to militaristic, basic to temples, etc. It’s a lovely touch that hints at the gameplay within. 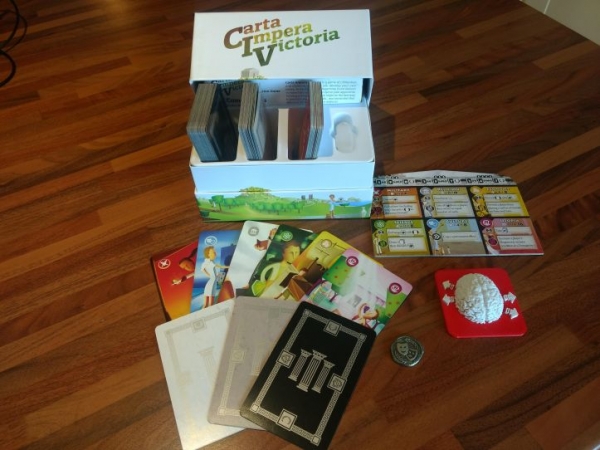 The game itself is not heavy with components: large cards, you can find sleeves for them, some player reference boards and a lovely metal coin are all that you need to be the leader of a civilisation. The cards are absolutely gorgeous, with simple but evocative art by Christopher Matt, and they feel great to hold. There is little on the cards other than a symbol and the art and that is all this elegant game needs.

Mechanically the game is simple, hiding its light under a bushel until you click into what is happening. On your turn you will play one of the cards in your hand, creating or adding to a domain in front of you: Military, Religious, Economic etc. If you have gained enough cards in a particular domain you can use an additional, permanent effect of that domain, perhaps twice if you have enough cards.

You may also discard a card from a domain to get a very different effect, but curtail your efforts to build up that set. For instance, by playing and then discarding a religious card I can take another player’s cards and then give them back the same amount, swapping some of my cards for theirs as I see fit. 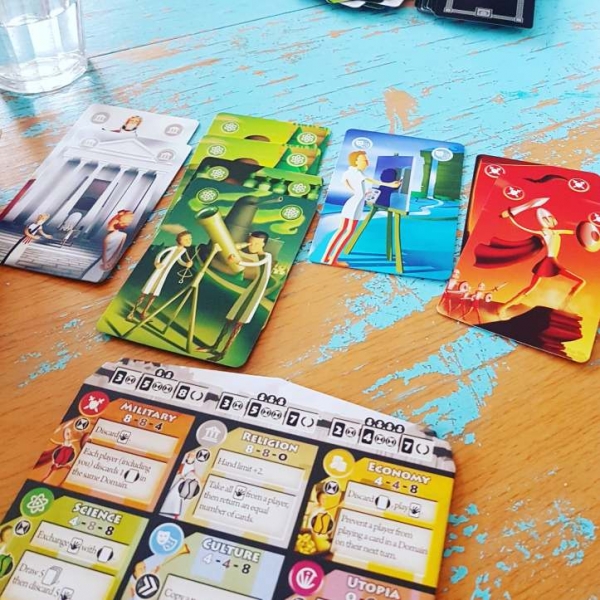 A set of domains in religion, science, culture, and military

It is these powers that are the absolute life blood of this game and a good few games in I am still exploring the possible combinations. One thing that surprised me is how delightfully thematic a lot of the powers are. For instance the military permanent ability, Assassination, allows me to discard a card, the economic discard ability is an Embargo which stops a domain being played into, and the Science permanent that allows for the swapping of cards in play is called Experiment. Simple mechanics with a strong theme.

To win you can either achieve a certain number of cards in one domain, a hegemony victory, or score points based on which domains you have the most cards in at the end of the game. Neither is simple and there is a lovely feeling of having to constantly adapt your civilization to the competing ones around the table. Do you stick with a course hoping to get the cards you want or do you go for a wide range of plays to get a little bit of everything, the truth is probably somewhere in the middle.

One of the lovely things about CIV is that it is extremely easy to teach and that is massively helped by the player boards. They succinctly and cleanly explain the powers you have access to, and the hegemony and permanent ability triggers. One is even coloured to show the first player.

The Art of Progress

The art beautifully reflects the progress of your civilisation with the domains looking more sophisticated with each age, despite remaining in the Roman era or near enough. The Science Domain really stands as out as looking more developed than the other domains, which may be deliberate but felt a little out of place to us. 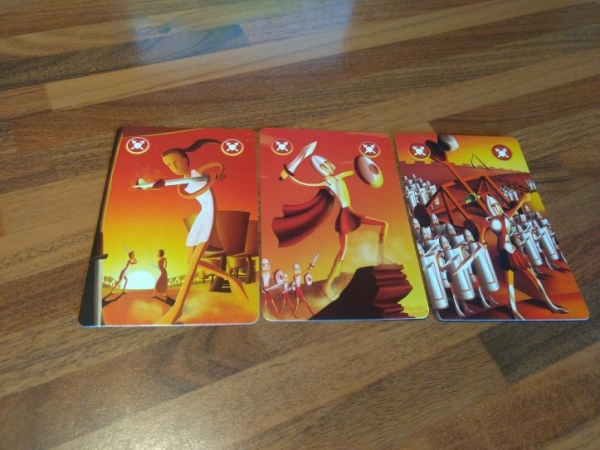 The game’s attitude to civilisation comes through in not only its powers but also the structure of the deck. As you go through the ages religion disappears, military becomes less prevalent, and science, culture and economy take over on the route to becoming a Utopia. Both military and religion provide effects that are directly destructive and combative, whereas the other 4 domains are focused on manipulating your own civilisation and blocking other people’s but in a less gotcha manner. I like that thematically it becomes less combative but that there is still room for strong plays and player interaction.

Diamond in the Rough

My tastes in boardgames have changed over the years and I have developed a particular passion for games that are laser focused, with elegant mechanics and just the components they need and no more. Carta Impera Victoria absolutely pushes those buttons for me and has really put the designer, artist and company on my radar.

It is a real shame that CIV seems to have fallen through the cracks and I hope this review has succeeded in bringing it to your attention. It’s ridiculously cheap for the amount of gameplay, and the art and production values make it feel like a luxury product. We don’t need swathes of plastic and huge boxes for something to feel premium. What we need is thoughtful design, beautiful art and excellent production values to connect us with the game, its theme and ultimately the people we are playing with.

This review is based on a retail copy of the game bought with Iain’s own hard earned money.