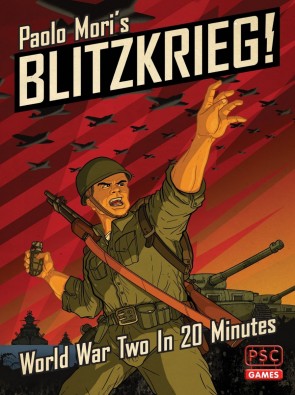 Blitzkrieg claims to offer World War 2 in twenty minutes. But beware the bag..

I'm a bit of a doer when it comes to learning games. As I get older, I find my ability to read through a swathe of information, retain it and then put it into practice becomes more difficult. I find myself second guessing more and more. And more often, I end up learning 'on the job' with the pieces laid out in front of me. It means that most of my first games can be labelled as messy endeavours, and I'm not actually switching the fun switch on sometimes until the second game, but as I get more involved in the critiquing of games, I become very aware I'm assessing learning the game as part of the overall process. Fun with bucket loads of additional work can be as tiring as a day job, and sometimes I want the simple immediacy of entertainment now.

So there are many things that are attractive to me when it comes to looking at a game as the likes of Blitzkrieg from PSC Games. The box itself is emblazoned with a bold claim of being able to experience World War Two within twenty minutes, while the simplicity of the main board suggests that even that might be a small lie. Unlike the real deal, Blitzkrieg is about winning victory points in order to triumph, and you do this by succeeding in the various theatres of operations on offer across the world, and you succeed in the theatres by winning multiple lines of campaigns. You win campaigns by placing tiles and being the first to reach the end space across the overall battle track.

The only rule for placing tiles is that they need to match the space for the type of territory they are being placed on. So a boat tile can only be placed on Water tile, while a tank on land, but planes can be placed anywhere. The battle spaces themselves have various effects that will grant you additional bonuses. Some giving you additional tiles to choose from and others allow you to gather one of the wonderfully devastating research tiles for later use. 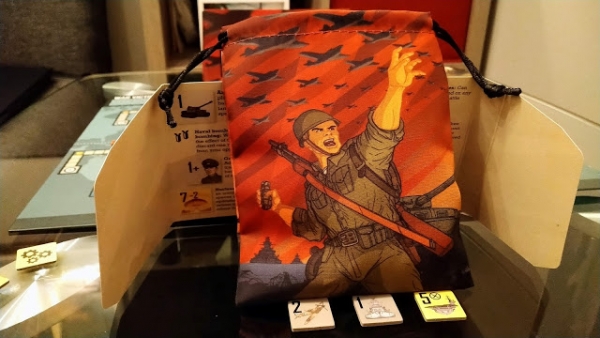 This might sound all very pedestrian so far, and that would certainly be the case if Paolo Mori hadn't introduced 'The Bag'. You see 'The Bag' is a huge game changer to Blitzkrieg. 'The Bag' can make the game superbly wonderful and amazing and "Oh, what a brilliant game", to stopping your campaign in its tracks and making you swear like the proverbial WWII trooper. You see, all of your tiles go into 'The Bag', except for three. Then as you play, you draw blindly from your bag. It's kind of like playing chess but you close your eyes before you decide which piece you'll play as next, and it adds such a level of sometimes delicious surprise as you play, that you'll be tempted to introduce 'The Bag' to help you make other choices in your life. Yes, I'm celebrating random choice. Yes, you'll just have to get over it. There is something fun about having to react to the changing situation based on what you have in front of you, instead of trying to plan six moves in advance. 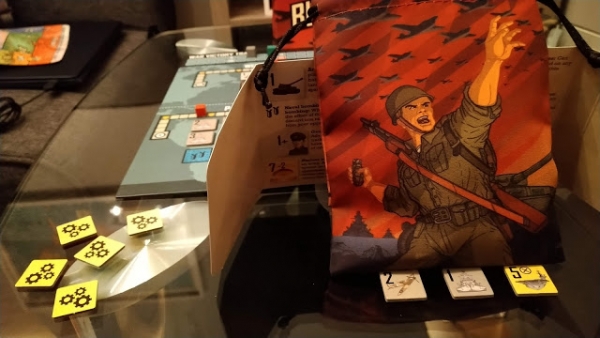 The upshot is that even with the additional research tokens and battle power spaces, Blitzkrieg is a very easy game to get to the table and just blast through. Once you play you first couple of games, it's strangely moreish. It's easy to reset and start again, and even if things aren't going your way particularly, then like the Scottish weather, you only really need to wait twenty minutes for it to change. It's also a bit brain burning too, as you can play tokens into any of the four theatres of war, as long as you have legal tokens to do so, and sometimes an unnoticed bonus space can really turn the tide. It often won't pay you dividends to concentrate all in one area, and I've been caught out with a bit of analysis paralysis on a number of occasions. 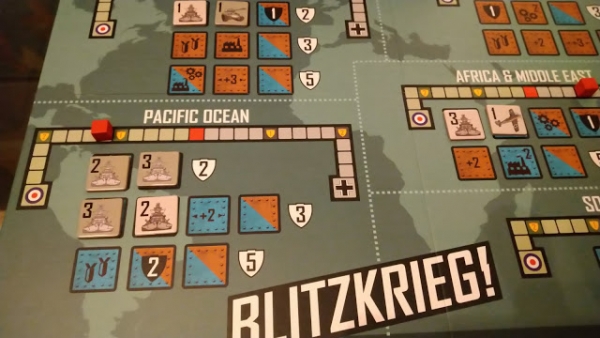 The base game includes a solo mode from David Turczi, in which there's a lot of work that has gone in to making it flow and provide a challenge as much as possible. It introduces Strategems, which make your invisible opponent focus on a certain strategy for that particular turn. I'm sure for those big into their solo modes, it's going to be a lot of fun, but unlike playing with an opponent, there's a reasonable amount to keep track of when you're figuring out how you should be playing, and so it wasn't something that I particularly enjoyed myself as I was constantly referring back to the rules. I'm hopeful of giving it another chance, but I'd prefer to play a person. 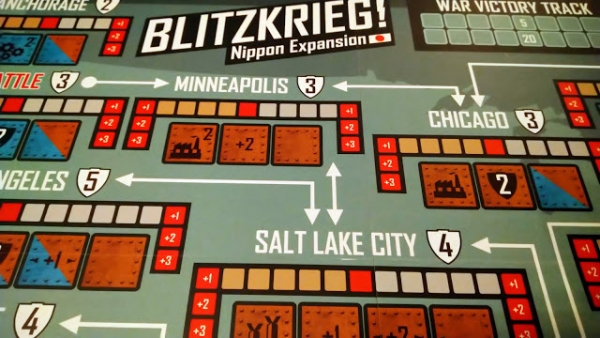 The Nippon Expansion changes things up in terms of the layout of the board, where there are more Theatres of Operations, but each only has a single line of campaign instead of multiple ones like its sibling, The main difference being that the winner of each campaign has the choice to decide which of the other Theatres is opened up to play in and has the chance to gain a slight advantage going forward. It's an interesting take on the main game, and leads to one or two extra strategic decisions. Funnily enough, it's also the map the quickest wins and defeats took place. The beginning campaigns are skewed towards sea spaces, so the first time I played the expansion, my opponent had three tank tokens and so was unable to play at all, thus throwing the match. A further couple of plays later on with a different opponent had one more outcome where they just could not lay a tile. 'The Bag' giveth and 'The Bag' taketh away. It's the only time the luck of the draw lucked out, but the Nippon Expansion is a fun variant on the main game and can also be played in solo mode as well. 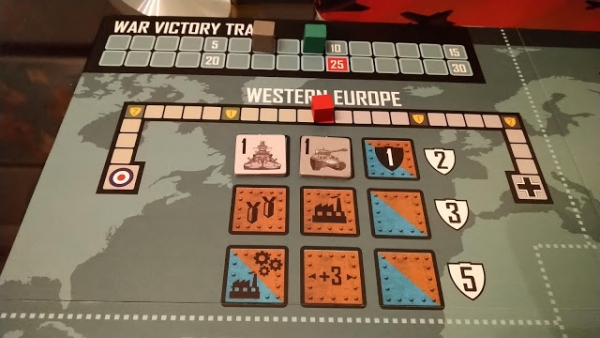 There's a wonderful purity to Blitzkrieg, where the strategy on offer sneaks up on you without pushing it down your throat, and you'll find yourself cursing decisions you made with minutes of secretly punching the air in joy as you realise you've played a move to take you to victory. For those looking for something short and very sweet, you'd better book some time at the dentist, as there is a chance Blitzkrieg is going to be a favourite dish on your table.

We were sent a copy of Blitzkrieg from PSC Games. PSC Games
We were not paid for this review
David Turczi  and Nick Shaw appeared on the podcast in Nov 2018 Welcome To Dinoworld

This looks like something I can take to work to play at lunch or something fast to play with my son when we don't have time for a long game. (Looking forward to him being home at spring break...I'm not getting enough gaming in with just my meetup group while he's at college)

The idea of movement along tracks is definitely the same though.
Read More...