No Dice Rolling on this River: Egizia Shifting Sands Board Game Review 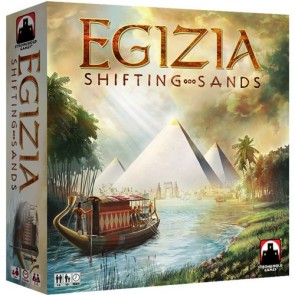 Updating a board game can be tricky work. Tinker too much and you can put off the purist fans of the initial release but, if you don’t fix the perceived bumps in the road, it might not bring in new players. The updated version of Egizia called Egizia:Shifting Sands, it is still about building those world famous monuments on the banks of the Nile and it still includes that powerful “One Way”(Down the Nile) worker placement.

It also still has those little rules twists that can be initially confusing. When building a monument, you need both the proper amount of a.) Stone and b.) Worker Strength. But you can only use one base worker at a time when working on a monument and you can’t combine base workers together to achieve that strength...but you can combine a base work and a “leader/purple” worker. And while there is a limit of one base worker per “monument” there are usually two monuments you can work on per “dock” space. (The Colonnade and the obelisk in one area and the Statues and the Pyramid in another). So, you can see where it could be perplexing.

The one dock that has a single monument is The Sphinx. Going to the Sphinx let’s you pull a number of bonus cards (that offer VP bonuses for achieving goals in-game) equal to the stone/strength you spend (up to a specific limit that depends on the number of players) and then keep one. That may seem overly powerful,which is probably why it has been moved to the last position on the Nile. Don’t get me wrong, you do want to hit this up a number of times during the game but the luck of the draw still plays a part and the more stone you spend to midgate that luck lessens your return. 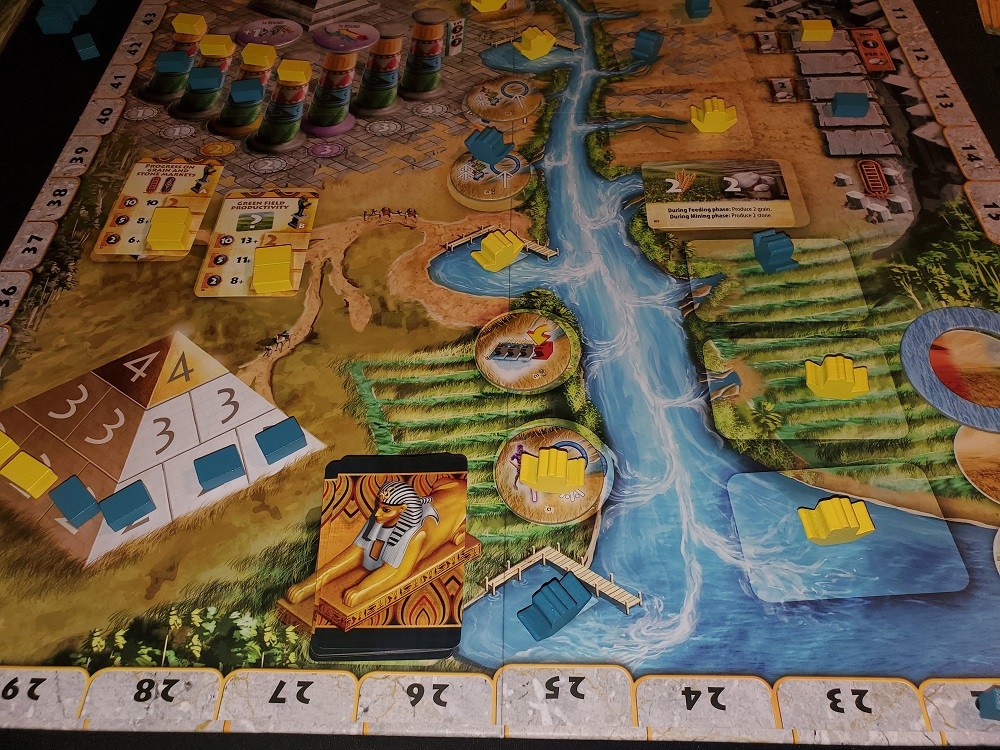 There is also the “prospecting” rule where you can place a ship beside a location if it is already “full.” This stops other players from simply clogging up a port to stop you from building on a monument. So, there is no “hate shipping” on the Nile, even if another player claims a spot, if they don’t actually use it, you can slip in.

All of your workers also require that they be fed once per round (bloody peasants!), so food is the other key resource in the game. Come up short on food for your workers and you suffer a loss of Victory Points...and try not to think about what happens to the actual workers.

It is weird that a game that is so cutthroat includes a “cooperation” bonus for building on multiple monuments in a single turn. When I say it is cutthroat, I’m talking about things like the weather ring. It can be set for harvest of only green fields, green and yellow fields and Green Yellow and Red fields. (Otherwise known as Some, Most or All). In theory, there is no reason to move it once it hits the GYR setting, is there? Everyone secures some food and it is a time of plenty...unless you want to be an ass and deprive other players of Grain and possibly cause them to lose some VP. The game seems particularly vicious with a two-player count since every “take that” is directed at the other player whereas other player counts sort of spread the “That” around.

The “There is always one less space available than the number of players” on the monument positions means you can expect friction between the players at any count. It is a friction that I, personally, enjoy. But you might get a ”Why you gotta be so rude, don’t you know I’m a slave driving monument builder too?” from the other players. 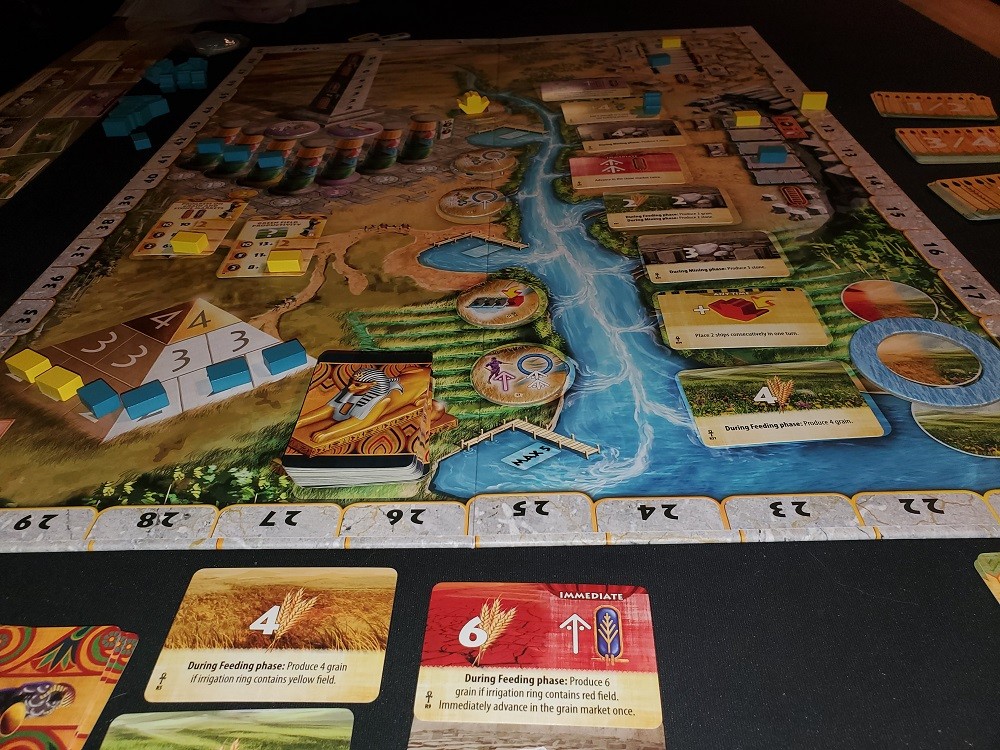 The decisions in Egizia are interesting, the “One Way Only/Downstream” nature of the Nile when placing your ships makes the choice of jumping further down the river to grab a location you really want tempting. But, since you are not allowed to place a ship on any position above where your latest ship was placed, it also makes it a gamble. There is also a mechanism that allows for “escalating” cards (seperate cards for round one/two three/four and round five) that increase the stakes/rewards at the game progress.

In all, it is an enjoyable, friction-heavy game that excels when you have three or more players. It is a good mixture of planning, strategy, and luck...with luck playing enough of a part that you’ll probably end up debating which was more important when you lose.

February 25, 2020
Rating
3.5
Egizia: Shifting Sands
In all, it is an enjoyable, friction-heavy game that excels when you have three or more players. It is a good mixture of planning, strategy, and luck...with luck playing enough of a part that you’ll probably end up debating which was more important when you lose.
W
WadeMonnig Top 10 Reviewer 195 reviews

Jackwraith replied the topic: #308571 25 Mar 2020 12:10
Have never played Egizia. Is it anything like Imhotep (if you've ever played that)? They sound similar, although Egizia sounds more "directly vicious", I guess, which is entertaining for those of us who like to trade blows within our building plans, as you mention.

We picked up a copy of Imhotep around the time of its release from an FLGS, played it a couple times, and then put it on the shelf. I looked at it the other day on BGG and there are like a half-dozen expansions for it. I had no idea it was that popular.

Sagrilarus replied the topic: #308592 25 Mar 2020 22:15
I'm curious about the title, which seems to have no footing in anything other than rhyming with someone's name.

Sagrilarus wrote: I'm curious about the title, which seems to have no footing in anything other than rhyming with someone's name.

I think they were going for Egizia meaning "Of Egypt." Or maybe you are right and it was Egizia: (in small print NOT A GAME BY) Reiner Knizia.
Read More...