3 from TMG- Aristocracy, Dawn of Mankind, Chrono Corsairs in Review 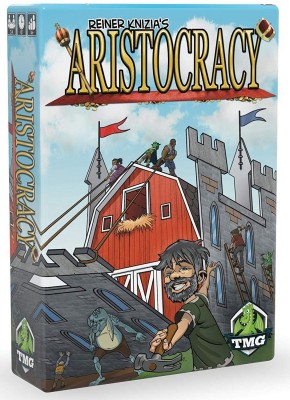 Game Name
Publisher
Tasty Minstrel Games
There Will Be Games

I’d rather play a mediocre Reiner Knizia game than a great one from most of today’s “best” designers, and TMG’s latest from the greatest living game designer is happy to oblige. Aristocracy makes a horrid first impression with abysmal box illustrations, typography, and graphic design. The bad look continues as you sort through the components, at least until you get to these fun little plastic castles, churches and barns. Once you look past the player cards with cryptic rebuses on them next to badly drawn (but at least diverse) characters, you’ll find that the concise and finely honed rules are exactly what you want from a Knizia game- simple, succinct, and deeper than it looks.

It is also, like most Knizia games, an iterative exercise on past concepts. There’s a little Medici in it, a little Africa, a little Through the Desert. Kniziaphiles will have little trouble tracing the threads through the ludography, but are also not likely to find Aristocracy among the highest or even second highest echelons of it. Knizia has been in sort of a late career upswing lately, kicked off by the outstanding Quest for El Dorado and followed through by the masterful Yellow and Yangtze, but this design feels like something from those wilderness years between the Reinerssance and Amun-Re.

The theme is gentrification and redistricting, if you can believe it. The thin storyline goes that the monarchs have disappeared (?) and the rich folks are carving up the kingdom to suit themselves. The box art, as bad as it is, speaks to this theme in a cheeky way, with workers applying a castle façade to a barn. I believe this is all supposed to be set in the same “universe” such as it is, that Harvest, Harbour, and some of the other TMG titles appear to be a part of.

Gameplay is classic Knizia. Limited range of actions, sacrificial decisions, deciding what to take and what to leave. Each turn you will flip over a set of three land tokens across the board and choose one of the face-up actions that you’ve revealed. There are four different resources you can collect, or you may get to place a marker on every face-up village, church, or castle tile. There is also a King and Queen track that you advance along if you choose their actions, placing an ownership marker on any tile.

Placing markers is how you stake out your claim, and the board is divided into regions and whoever places their third or fifth marker in a region gets a scoring bonus. There’s also a bonus for connecting towns with your marker. Those resources are a set collection scoring mechanism- this is all from the old school Eurogames playbook.

It’s also rather unspectacular. I like the decision points as you reveal tiles as they force you to consider not only what is most lucrative for you, but also what you might be leaving on the board for someone else to take advantage of on their turn. But the remainder of the design just doesn’t excite in the way that the classic Knizia games do, and the whole affair feels stiff.

But I still enjoyed my time with it, and I would still choose it over quite a lot of the dreck that is dribbling out of the spout of the games industry today. But I would never reach for it over the more venerated, all-time favorite Knizia titles and I would not regard it as a substitute for them. I’m not sure I’d recommend it as a first time experience with the designer either, as I feel that you’ve got to know where this design is coming from in terms of his iterative process to get anything out of it.

Marco Pranzo’s Dawn of Mankind flips the script on Aristocracy – it’s a great looking that isn’t very good at all. The ace graphic design by Katie Welch and illustration work from Kwanchai Moriya makes this civ-lite game look much better than it really is. After playing Dawn of Mankind through one time, I was through with it but I did the due diligence and suffered through no less than three crash-and-burn sessions with friends and family. There is so much that this game does that I just have absolutely zero interest in at this stage. Cube tracking, resource and VP conversion, bonus cards, tile selection, worker placement – it’s like a litany of tired gameplay elements. I could not honestly point to one interesting or compelling thing about this game. Maybe it’s cheap? Or it’s small?

This is one of those “what if the tech tree was the game” style civ-lite games. Your job is to push the clan meeples of your nomadic tribe through a lifespan (child, adolescent, adult, elder) while accumulating progress cards and performing the actions on tiles along a branching path. Maybe they even make some art along the way. The goal is to earn progress cards, make more clan meeples, and whatever add-on points you get for resources at the end.  The most interesting aspect is that your workers have to be bumped off their spaces to move and be placed into a ready area to be used again. But I can’t say that was something I found all that thrilling or compelling. It felt like an artificial way to introduce interactivity.

Years ago, Ameritrashers railed at the “spreadsheet” like quality of some Eurogames. That was largely an oversimplification and overstatement of the procedural and sometimes dry nature of those games, but here is an example of a modern game that looks, quite literally, like it was designed as a flowchart. I hate to be so down on any game, but I’m reflecting on this game and wondering why it was green-lighted. I appreciate Eurogames more than I ever have before and I absolutely value simple, accessible, and inexpensive gaming options, but the uninteresting gameplay in Dawn of Mankind just doesn’t cut it these days. It’s repetitive and soulless, and even at only 45 minutes it’s more than I care to handle.

Speaking of repetitive, Chrono Corsairs has a killer setup – pirates are raiding a treasure-laden island but they trapped in a time loop a la Groundhog Day or Edge of Tomorrow. This is an eyebrow raiser, and I was totally on board with idea and interested to see what gameplay concepts emerged from it. Unfortunately, what you do in this game is pretty much the exact same thing we’ve been doing in area majority games from here to El Grande, with the differences being a couple of “if/then” mechanisms, a perfunctory (but persistent) upgrade-base progression, and some occasional pirate-on-pirate violence to give it just a little more friction.

At the beginning of each loop, an Anomaly is drawn that has an effect for that round based on how far along the Time Vortex is to collapsing. Each player gets to draw an assortment of Stable and Unstable action plan cards based on a couple of upgrade tracks. You use these to cover up the four basic actions, which allow you to move one of your two Captains along with any crew to a specified terrain space. Each of these also corresponds to a time of day, because if you go into an area at the right time of day you get a bonus tile. Once this is all settled – and there is some Artifact play that may shake things up a bit if you have any to use – each of the areas including (cue theremin) Mysterious Caves are scored. Come on, you know how to do this. Most pirates, 1st place treasure. Second most and third most, if the area indicates, get the runner-up prizes. The treasures are doubloons, artifact cards, and Time Gems. And by Time Gems…I mean victory points.

It’s a good looking game, despite the mulligan’s stew of icons slathered all over the place- sure, most are self-explanatory, but there are 36 different symbols in the game. The biggest problem with games that have a lot of icons like this, aside from the visual clutter they create, is that they also often indicate an overly complicated game. And I do in fact feel that Chrono Corsairs is overly complicated. It’s not acomplex game in that the decisions, rules, and strategies are nuanced and rich in depth. It’s one where you have to look at the time track and see if you get a bonus tile. You have to look at the Volcano terrain to see if the Vortex track has triggered its treasure eligibility. You have to look over at your opponent’s sheet to see if their next action card is going to make his pirates move in and kill your pirates.

This is all not incredibly interesting at all, and it’s not helped by the fact that the core gameplay here isn’t nearly as innovative and progressive as the on-paper concept might suggest. I lovethat you have a persistently upgraded ship and that improves each loop’s performance, ideally. But you’re buying extra pirates, paying to draw an extra card, paying to remove a card…the same things you’ve done in 20 other designs. And it does not feel like the game has much of an actual arc- who would have though a game about repeating a time loop could be so repetitious? It seems like a wasted opportunity to do more with this notion, bogging it all down in miscellaneous mechanical clichés and well-trod gameplay elements.

I don’t believe that every game has to be a staggering work of innovation and I think there is much to be said for comfortable, familiar mechanisms freshened up in the context of a new setting or concept. Witness how Settlers of Catan is a hybrid of Craps, Roulette, and Civilization. Or how Carcassonne is a Dominoes variant. But this is a game that feels redundant both while you are playing it and when you compare it to others on your shelf. Sure, those who don’t have games like El Grande or Tikal might find more value in Chrono Corsairs and there is definitely a playable, competently designed game here. But for those of us who do have those or similar time-tested games, the game has a difficult time making a case for itself. Which is, perhaps, the unifying theme for these three middling titles.