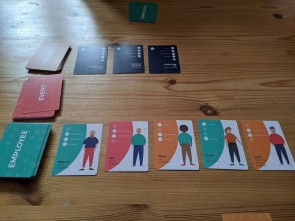 Being a reviewer can be an odd job. All sorts of games come across your desk and you take on what you can, hoping that you can in some small way guide people to the games they will love. Since turning The Giant Brain towards journalism, I’ve always wanted to help out small publishers and local designers and you can’t get much more local than someone who lives a literal stones throw from my house (I haven’t tried this as I might smash a window).

The Digital Agency game from designer David Storey, illustrated by Natalie Loh, sees players taking on the role of running your own digital marketing, website design, and social media company. They do other things as well. Honestly it’s unclear (through no fault of the game).

How this shakes out is a simple game of taking on a variety of different projects from school systems to Airplane companies and assigning staff to complete them. Projects have requirements, staff have skills, marry them up correctly and you have yourself a complete project and some points towards victory. 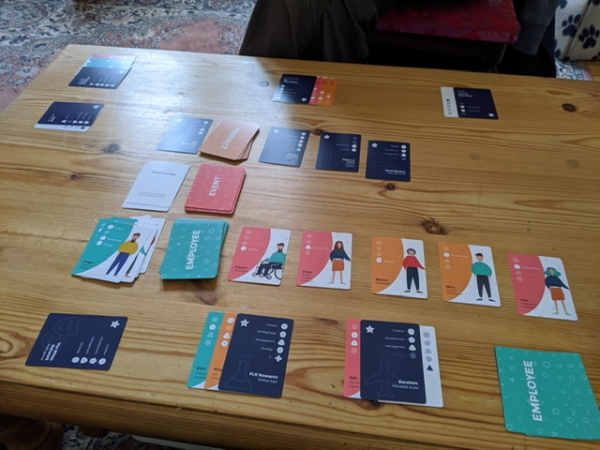 Despite the art style being very simple, the staff cards are very diverse, something that bigger companies that have much more time and resources to devote to their games could take note of. This should be something that is easy to get right these days and it annoys me that I have to call out the good stuff when I see it.

Event cards are thrown into the mix of set collection. This is a deck of cards with a variety of effects on them ranging from devastating to rewarding, bringing projects crashing down or making your path to completion much easier. Every turn one of these events will turn up and when the deck is out the game is over. The person with the most points of projects claims the victory. 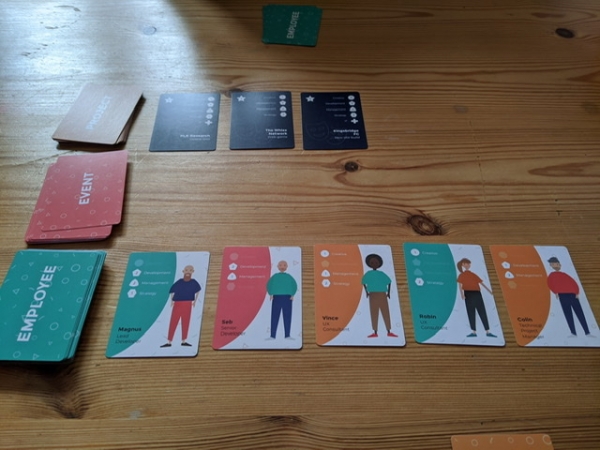 Those poor people have no idea what's in store.

It’s a simple game for sure, and I have absolutely no problem with simple games. Unfortunately it’s just not very much fun when held up against other games at this complexity.

When playing we couldn’t tell whether the games was satire or not. When you complete a project, you throw the staff away who worked on it. This could be a biting indictment of the capitalist mill, but in reality it just feels odd. Digital Agencies, best I can tell, don’t get rid of all the staff that worked on a given project.

The event deck just slaps you around randomly, which feels like the ‘gotcha’ element present in some games but without the benefit of player control. Every time we turned one over it was just a random bonus or negative, which whilst I can see being about things changing fast in the world of digital marketing, is just not very fun as a game element.

Suffice to say I won’t be recommending the Digital Agency game to you. However, before we sum things up here I would like to talk a moment about context. As a critic you can’t just compare every game to every other game. It’s your job to provide, and be aware of, the context of the game: what other games are like it, what sort of complexity is it, what theme is it trying to evoke that other games also evoke, the place in the culture of boardgames etc.

When I started writing this review I contacted the designer to let him know my thoughts. I don’t often do this but I had met David previously at one of my Playtesting meetups and I wanted to give him a heads up on my thoughts about the game. During the course of this conversation it turned out that the game had originally been designed for a digital agency. In that context, this game is actually alright. Intended as a marketing tool it shows the kind of skills you might need on different projects and that that you can have diverse hires with no detriment to your agency.

The boardgame world is ready for new themes. Tired of the same old fantasy and sci-fi, the time is right for the exploration of different ideas. I am certain you could make a good game about the fast paced world of digital marketing, maybe even providing a satirical look at that world. Much as I think The Digital Agency Game is not a bad tool for a digital agency to have, it just doesn't have that spark that turns it into a compelling game.

A copy of the Digital Agency Game was provided by the designer, David Storey. David has previously come along to the playtest group that I run in Edinburgh. We do not charge for previews.