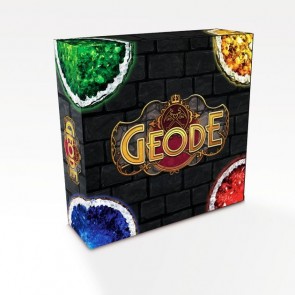 It starts about three exits before we actually reach the location. It is an barely audible, simple exclamation from the back seat “Rock Shop.”

When we reach the actual exit, it becomes a plea “Rock Shop! Rock Shop!”

And that is literally what it is: It is a shop...that sells rocks...on the way down to Lake of the Ozarks and the infamous town of Branson in Missouri. A hold over from the Route 66 era, It just happens to be on the way to my daughter’s college. What it does have for sale are some truly amazing Geodes (with corresponding truly epic prices). In the “heat of the moment,” surrounded by these stunning geological finds (and, apparently, what people will pay for them), someone will inevitably say “We should go Geode hunting!” Whoa, slow your roll partner. How about we just ease into this with a nice, quick game of Geode by District 31.

Geode is played out on an imaginary 8x8 grid and, after the first tile is placed, all following tiles must match in order for it to be played. There are five included colors/types of geodes: Citrine (Gold) Emerald (Green), Sapphire (Blue), Amethyst (Purple) and Ruby (Red) (There is also a diamond (wild) piece which can match with any other color geode).  You are restricted to placing your tiles in the 8x8 grid....until your aren't. If you can't legally place a tile in the 8x8 grid, then you can expand it to 8x9, adding a now-legal row that anyone can play into. Since there is no default board that you set the grid up on, that means there is plenty of counting the tile rows to see if you have reached 8...and then wonder why you bothered since you can play outside the grid if you must. Don't get me wrong, this rule is important and should not be skipped (to avoid the game sprawling uncontrollably across the table), but it is popped up confused looks from the players I was teaching it to. 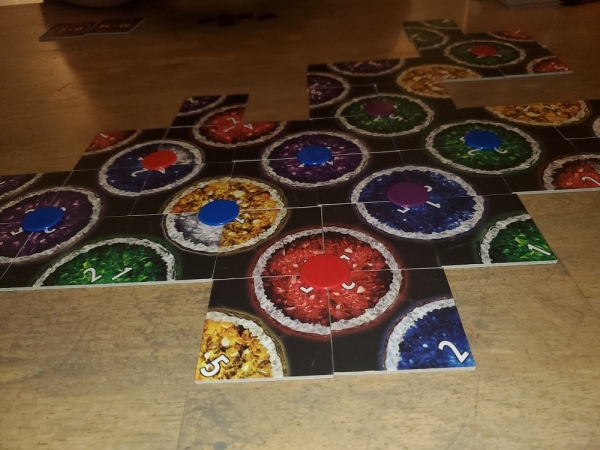 All of the Geodes you will be building/unearthing/placing consist of four equal parts, so constructing them isn’t an elaborate process: It is Draw one, then play one of two tiles in your hand. This was one of the first rules I discussed with the District 31 team. Only having two tiles in your hand felt a bit restrictive. While assuring me that through thousand of plays, they had determined that two tiles was the sweet spot between selection and drama, they urged me to try it at other tiles-per-hand counts and let them know how it changed my experince. The option that recieved the best reception at my table was playing with a hand of tiles equal to the number of players. 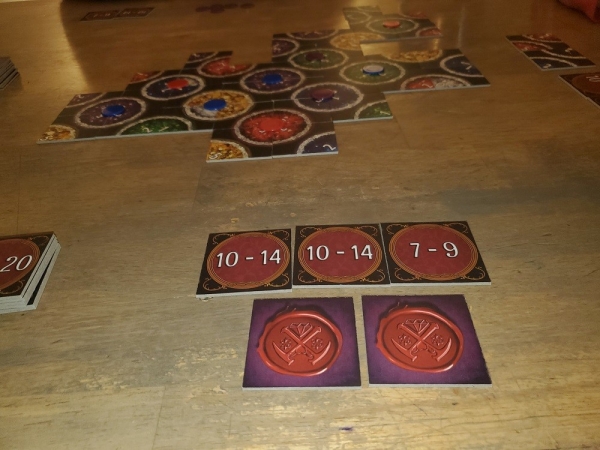 When you finish a Geode, you place one of your scoring tokens on it and then draw a scoring tile. Adding up the numbers on the four Geode pieces will give you a total number of “points.” The scoring tiles cover a range of points and,if any of your finished geodes, (not just the one you just completed) are equal to the points stated on the tile you drew, you get the gold payment listed. If you can’t match those points to a finished geode, you only receive the lesser, silver payment listed when scoring at the end of the game. So, bring a fistful of luck along with your shovel when uncovering these Geodes. I noted that this just feels like the reverse of most other games: You complete your goal "Build a Geode" then draw what is essentailly a goal card to see if you achieved it. It is by no means "wrong" but it just feels backwards to what you find in most other games.

Obviously, the game isn’t too complex. The limit on tiles in your hand means players don’t spend too much time thinking about placement and some turns come down to “Does it fit anywhere else? Nope, well, then I guess I have to play it there.” Playing with the alternate purposed set-up gave more placement options but not so many that it loses the drama of the restriction.

Since you only place your tokens on a completed geode, delaying placing a matching tile in hopes of someone else playing on it (allowing you to swoop in and claim it later) is a tactic you’ll often see. But, since you don’t know what tiles the other players hold, you could be playing “Who’s going to blink first?” with other players who simply don’t have that tile you want them to play. 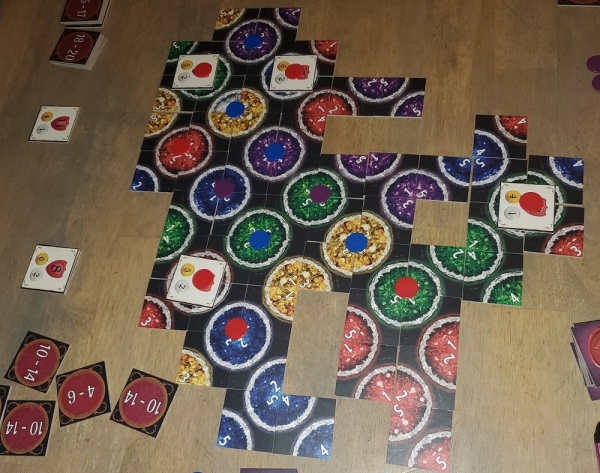 This preview is based on a pre-production copy of Geode. The final version should include snazzier, translucent chips for each player. The scoring numbers will also be moved so that when you place a chip on them, they won’t cover the numbers and make it difficult to see their score at a glance. There are also plans to make the Blue "pop" more and stand out from the purple. During the writing of this preview, I had a pretty much constant back and forth with District 31. They were very interested to hear what I felt worked with the game and the things that I felt could be improved. Some things could change before they actually launch Geode, including a possible playmat that will virtually eliminate that couting the tiles to see if you have reached 8x8, the addition of the larger hand size based on the number of players, and the addition of other special tiles.

In it's current inteneration, Geode is easy to play, features simple instructions, and a delicate mixture of both luck and strategy that really trends toward the luck side for scoring. The eye-catching (Rock Shop) graphics accent the gameplay to create an entertaining, if somewhat light, tile-placing geology experience.

A preview copy of this game was provided by the publisher.