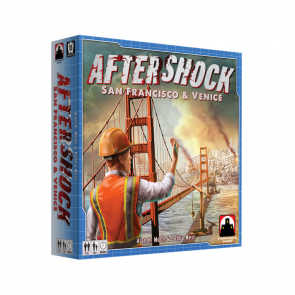 Build a thousand bridges and no one calls you a Bridge Builder, but if you cause one Aftershock…

Aftershock is set in San Francisco and Venice (and, no, it’s not Venice, California) directly after an Earthquake of Blockbuster Disaster Movie Proportions. The players are tasked with rebuilding/repopulating the bay area (or, in the case of Venice, let’s just call it “The area that is still above water”).

Everyone is dealt 8 cards and you pick which of those cards that you wish to buy with your limited funds. Cards include the ability to add workers to a specific location, build a bridge, buy influence or cause aftershocks. Whatever cards that are left over, or you were unable to purchase, are then put up for auction. Well, calling it an auction is probably a misnomer. It is more of a “Buy It Now” price on Ebay. Whatever you choose to call it, I love this aspect because the cards you put up are never ones you really want to lose. But if someone does buy a card, that money goes into your personal pot for you to spend and not into the bank. And don’t forget that if any of the cards remain after the bidding phase, you can take one card for FREE. So, should you leave an expensive, powerful card out that could be taken on the chance that you could get it for free if no one wants to spend that much on it? Maybe, but if everyone buys ALL the cards in front of you, you can end up not getting a free card at all.You bid on other’s cards by using -2 Million tile, a -1 Million tile and a +1 Million tile. The two “discount” tiles can be used one per bidding round while the “pay an extra million to the bank in order to buy a tile” can be used any number of times per round. 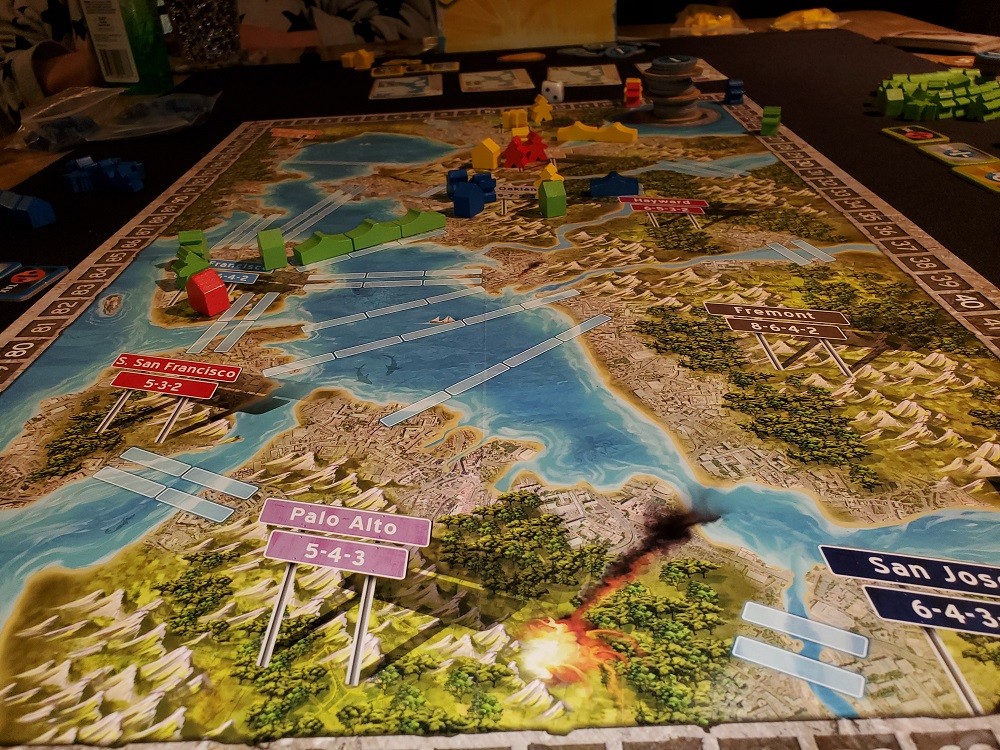 After each round is over and you have completed building and shocking, all of the money in the bank is equally divided among the players. So, spend while you have it...but you might want to save some if you think you might have to pay to have a shocked worker cross a bridge (it only costs a piddling million to use another player’s bridge).

The Aftershocks that the game is named after are all player directed, so it’s not fully luck based. Sure, what cards that come up for you to purchase or bid on have that “luck” aspect. But you can assign an Aftershock to any area and, if you are in last place at the end of a turn, you get a “free” Aftershock you can assign to any area. Factor in a little “push you luck” since the number of workers that flee an area are determined by a roll of the dice (and a modifier on how big the Aftershock is). It also has that neat twist that if there aren’t enough opposing workers in an area, YOUR workers will flee the area. Or, if you are particularly sneaky,that could have been your plan all along (to make your workers flee to gain a majority in a separate area). 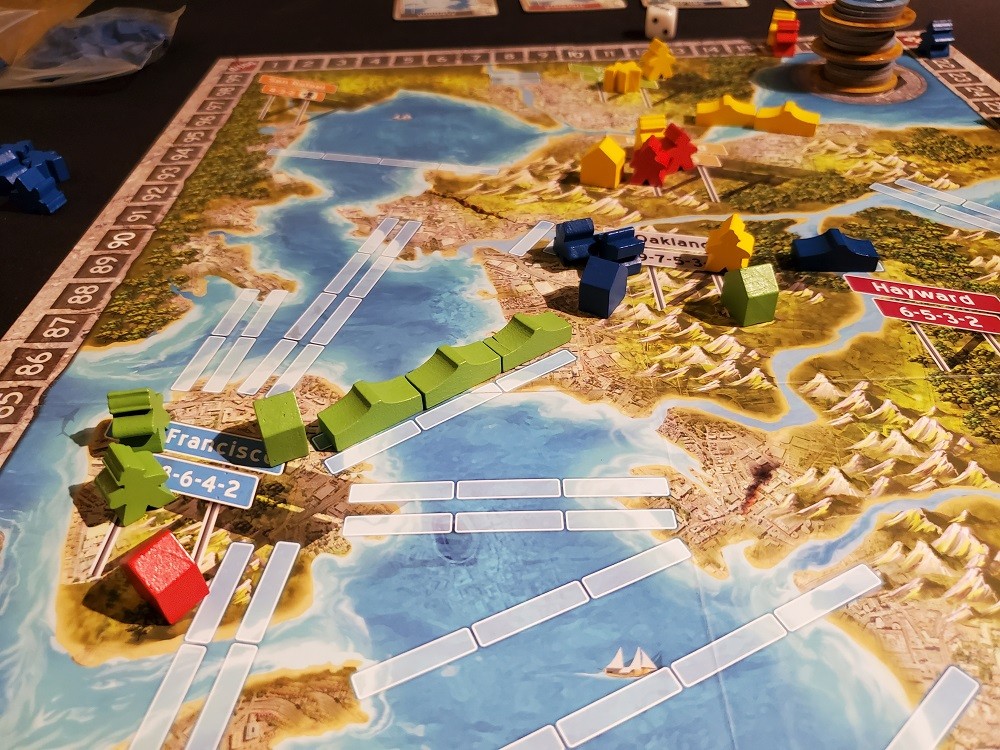 Aftershock has those little quirkaches that just feel like an “Gamer’s” Board Game. Toward the end of each round, all the players vote on what areas they would like to see scored. You need at least two votes to score an area...unless you use an influence token which counts as a second vote in any area you place it. The part that really makes it quirky is there are two areas (one on the Venice side of the board and One on the San Francisco side) that DON’T need two votes to score them. And don’t forget if you win first place in the influence race of an area, you must remove a worker from that area. (Not sure what the thematic justification for that is i’m pretty sure you’ll find him leaning on his shovel, smoking a Marlboro later in the game). It’s not easy-breezy rules (like that other game Mr. Moon is famous for) but it is nothing that hinders the enjoyment of the game. 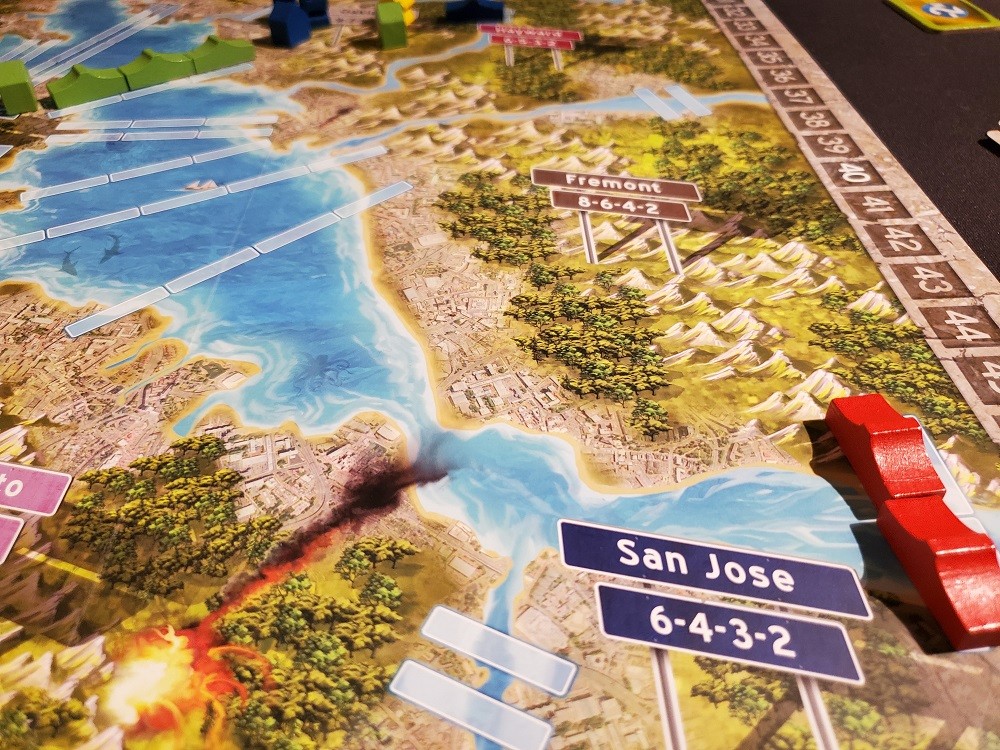 The difference between the two sides of the board (San Francisco and Venice) comes down to player count (with a bit of crossover when playing with (three) players which you can do on either side).

It is a tenuous bridge support that holds the whole theme of Aftershock together. Hmmm, Construction Control?: Does that really “work” as a basis for a game? I love building the bridges but the only real use they serve, outside of possibly scoring them, is escape routes for “shocked” workers. And it is not exactly realistic when you want to build a longer bridge and you can simply drag one of your already constructed bridges over to complete it. Are we simply moving population back in or are they the workers for reconstruction? I’m so used to “placing workers” I never really thought about that until now. But, honestly, it doesn’t really matter because the game is fun. It really slips into that El Grande kick I have been on lately. 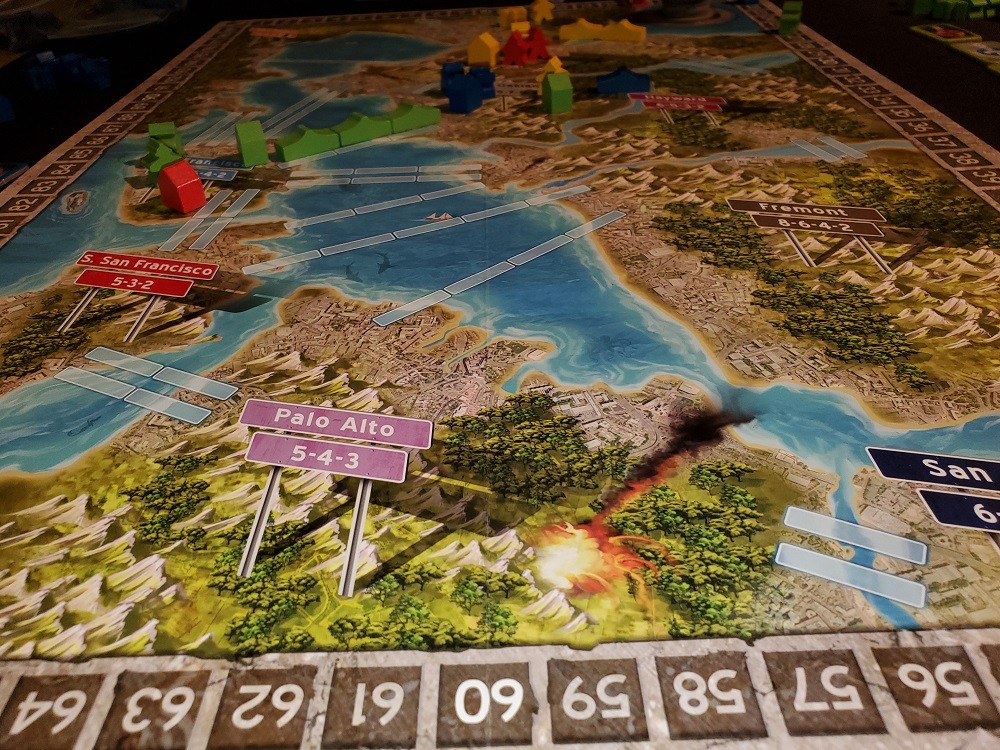 Weird aside: What is up with hands and board games? Have you ever seen the Alhambra dice game first player marker? It’s this guy and he seems amazed by his hands...and my group always cracks up about it. And then along comes Aftershock: San Francisco and Venice and, lo and behold, the engineer on the cover...looks like he is inspecting his hand. Hand Gazers must be the board game equivalent of Navel Gazers.

Aftershock is an odd premise for a majority control game but it works and, more importantly, it excels at being shockingly entertaining. It is definitely not what I was expecting going in but I wasn’t disappointed in the least.

March 05, 2020
Rating
4.0
Aftershock: San Francisco and Venice
Aftershock is an odd premise for a majority control game but it works and, more importantly, it excels at being shockingly entertaining. It is definitely not what I was expecting going in but I wasn’t disappointed in the aftermath.
W
WadeMonnig Top 10 Reviewer 195 reviews

Jackwraith replied the topic: #308757 01 Apr 2020 09:05
So, the aftershocks degrade your opponents' construction efforts? And "shocked" workers are less mobile or less efficient at doing the jobs where they're assigned?

Jackwraith wrote: So, the aftershocks degrade your opponents' construction efforts? And "shocked" workers are less mobile or less efficient at doing the jobs where they're assigned?

See, that's the thing...it's weird. I'm not sure I did a good job explaining it. You can construct bridges, which also gives you more workers/population...and I keep wanting to call them workers but they really aren't. You main goal is to repopulate areas, so it is a Area Majority game (get the most points by having the most population/workers in each area). The Aftershocks just "scare" the population out of an area (with the bridges you build allowing population to flee off any area surrounded by water). If a population isn't able to flee, they are lost/removed from the board. But there is also a "Have the most bridges" scoring as well, so, they are used in that way too. When you "fire off" an aftershock, it scares a number of population rolled on the die. So, if there were 3 red, 3 green and 3 black population in an area and you rolled a six, you could cause the 3 red and 3 green to flee (hopefully across one of your bridges so that they have to pay or toll or be lost).

Jackwraith replied the topic: #308773 01 Apr 2020 15:34
Ahhhh. That sounds a bit more interesting than I first thought, especially given that you can score points just for having bridges. Sounds like the "you can take one path to victory but can't totally ignore the others" kind of thing. Cool. Weird theme, though.
Read More...