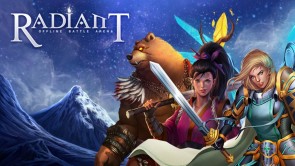 The world of Multiplayer Online Battle Arenas (MOBA) has been exploding over the last decade. Multi Million pound prizes, huge tournaments, winners elevated to celebrity status amongst the gaming community, hundreds of articles and tonnes of analysis. It was perhaps inevitable that these games would inspire a slew of tabletop imitators: Cloudspire, Guards of Atlantis, ELO Darkness, and many others besides.

Radiant: Offline Battle Arena (Radiant) takes these games and attempts to distill them into a compact card game format. Whilst I admire the ambition on display here, I am not certain that the team behind the game have entirely succeeded in their goals. Radiant is designed by Jack Murray and published by Heel Turn Games. It is illustrated by Gong Studios, Monztre, and Evan Surya Nugraha.

I think it is worth us having a quick look at the MOBA format if you aren’t familiar with them. These games are numerous but the famous ones are League of Legends, Heroes of the Storm, and Defence of the Ancients (DOTA). In these computer games you have a team of heroes trying to get to the base of an opponent and destroy it. Each hero has unique abilities, and learning to combine these together to great effect is the core of MOBA play. As the game goes on heroes level up, get new abilities and in some MOBAs can attach equipment to help them out. 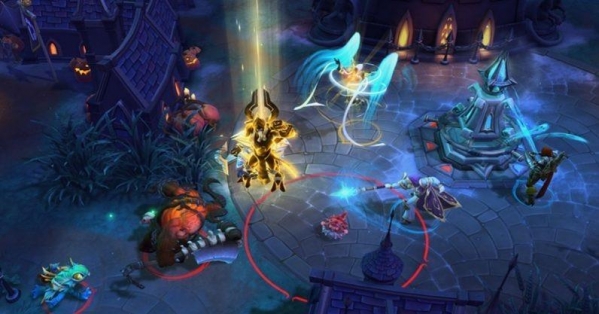 Blizzard MOBA, Heroes of the Storm

In most MOBAs each team also has creeps, waves of minions that are not controlled by the players but push forwards to attack the defences of the other team. Generally these creeps push along lanes, and managing the push and pull between each lane is fundamental to success.

Radiant distils this format down to the clashes between the heroes that occur in the MOBA genre, giving you three apiece to formulate your strategy with. Each hero has their own strengths and weaknesses, emphasised by the deck you get to build with 10 cards for each hero full of attacks, talents, and the rare ultimate powers. The thrust of each match is taking down the other teams deity, another hero that takes the place of the base in a MOBA, forcing it into existence through attacking Conduits, the lanes of the piece.

The core of the game revolves around using a tight action economy to move between lanes, play cards, and attack heroes and conduits. Mostly the last one. Each lane has one conduit for each team in it and can be attacked and eventually destroyed. If it is then it flips, activating an ability and when all three are taken down the opponent’s deity is forced to manifest, if it hasn’t done so already. Take it down and the game is yours. 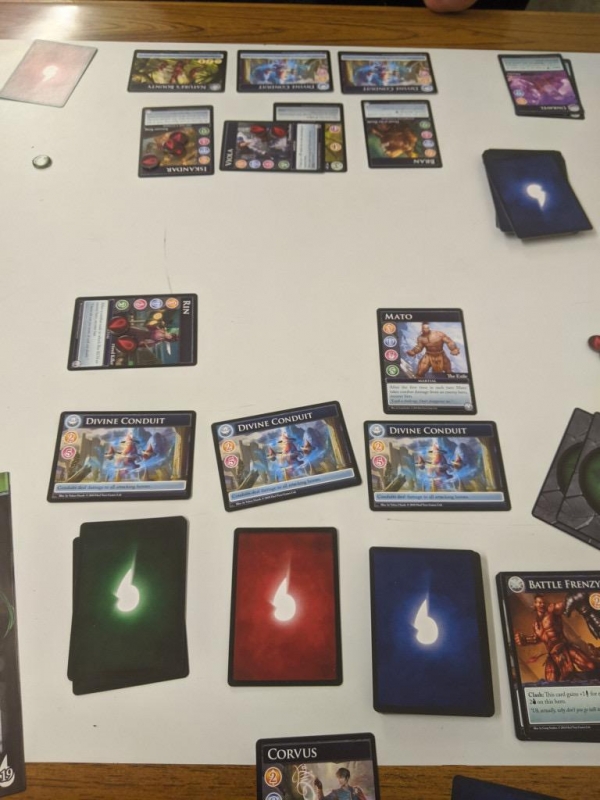 My 3 conduits, 1 in each lane, two heroes in play, the red face down card is my deity who I have not yet manifested, blue is my deck, green is my shop.

Heroes of course can get in the way of any attacks on conduits, exchanging cards (clashing) and wounds. When a hero has taken enough damage, they are knocked out and the attacking player gets some Power. One of the features of MOBAs are that heroes can come back to the fray after some time knocked out, and that mechanic is present here. voluntarily blow up one of your own conduits and you can bring all your knocked out heroes back, or spend some power to bring back an individual hero once a game. Power can also be spent to level up heroes or buy equipment, again duplicating mechanics from the MOBAs that inspire it.

What you get from all these mechanics is a tug of war between side that can be dramatic. However the real struggle is to find those moments through clunky mechanics, sluggish economy and card draw, and one of the worst rulebooks I’ve ever read.

Rulebooks are a particular bugbear of mine, so let me lay this out for you. If you are publishing a game, be that as a one person outfit or a massive international company, you need to realise that the rulebook is going to be your customers' first contact with your vision for the game. The marketing copy, the glossy pictures, and the nice components all draw people in, but that doesn’t tell me what how your game plays. That is solely in the hands of the rulebook. If the first contact with your rules is bad, how do you think things are going to go for those players?

I have played a lot of games and I’ve played some pretty complicated collectible card games with weird card interactions and edge cases. It took me a fair amount of time to pick apart how Radiant worked, and in truth it isn’t that complicated. It is however very badly explained. The rulebook desperately needs a ‘this is your first game of Radiant, do the following’ section, a tutorial like a computer game might have. I didn’t find the how to put decks together until right till the very end of the rulebook, I had to dig down to find what experience was (its just power you spend to level up a hero), the table setup is many pages in, and how to win is on page 8 out of a 24 page rulebook. 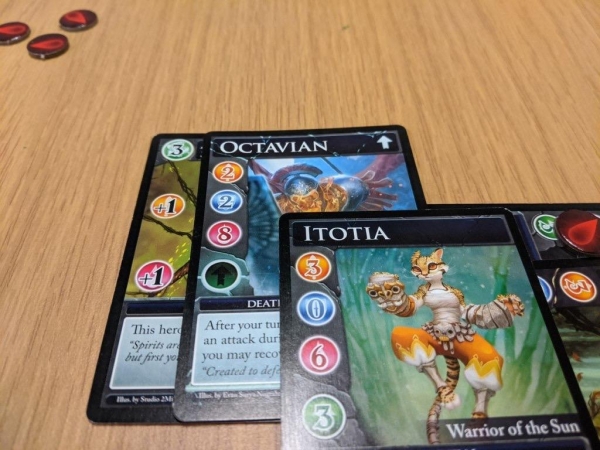 Minor complaint here, but why don't the numbers line up when you align equipment under a card?

Mechanically there are two real oddities, Power and Card Draw. Power trickles in very slowly, mostly from knocking out heroes, but you can also get it dripping in at the start of the turn if you have an Evoker, a certain class of hero, in your team. Equipment and power ups cost a minimum of 3, the resurrection of a hero costs 5, and it never feels like you have enough power to do what you need to do. For some games this kind of decision can feel important, but here it just feels frustrating.

This feeling of frustration is doubled when it comes to card draw. Starting with five in hand, you will draw a paltry one at the end of each turn. You get the occasional boost from a card, but those are few and far between. This just leaves you feeling like you can’t pull off cool combos, have less options, and you can’t quite build up a momentum. Building, and maintaining momentum is a fundamental in MOBA game play, and it just feels missing here.

There is a rule by where you lose if you run out of cards, but I don't think I've seen a game go longer than half way through a deck before finishing. If you are going to have slow card draw in a game, there should be ways round it, or every card should feel really meaningful. Here it just feels like a barrier to having fun.

When I actually made my way through to the game, there were moments of Radiant I enjoyed: the push and pull between players, the tight action economy that led to some interesting choices, and the universally great art. I can see the core of an interesting battle game in there, but it is hidden under a rulebook that does its best to hide how to get going.

I know there is an expansion coming soon and along with it a new edition of the game with all the expanded material etc. I really hope that the design team take some time to release a new version of the rulebook as well, introduce a good tutorial, and really polish the game so it can reach the audience they wanted. As it stands, I think there are better two player games out there and I can't really recommend Radiant whilst the game is such a pain to learn.

A copy of Radiant: Offline Battle Arena was provided for review by Heel Turn Games. We do not charge for any review.