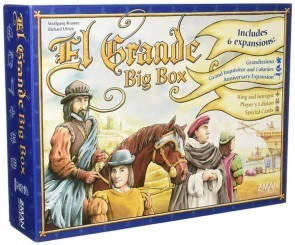 Welcome to another edition of Discount Dive where I look for games that are on the cut/deeply discounted. In the case of El Grande, I found the Big Box edition on the shelf of my local game store for $45.00..Doing some quick justification math, I figured if I divided the price of the base game and all the included expansions, I could bring it in under the Discount Dive’s non-existent guidelines.

If El Grande isn’t the Granddaddy of Area Majority games, it certainly is one of the founding fathers. There are no true battles between players but cubes/meeples are constantly being placed and moved and manipulated, which is thematic, as you don’t want outright war with the other nobles, just to assert more influence over Spain than the other players. There are no Dice, just cards,and luck is what you make of it.

“It’s Cubes/Troops in a Tower!” The tower (Castillo) is the embodiment of a “you are going to fail this memory test”. It is not only a separate scoring area but all of the troops placed in the tower are then moved to another location when they are revealed. You are told by every player exactly how many cubes are being added as they drop into the tower...and then you commit that to memory, someone mentions salsa and promptly forget the count. Yes, it’s annoying but it is all part of the experience.It’s that touch of luck they you actually do have control over. House Rule it if you want (that you can check the tower at any time) but, come on, then you miss the fun of the reveal. 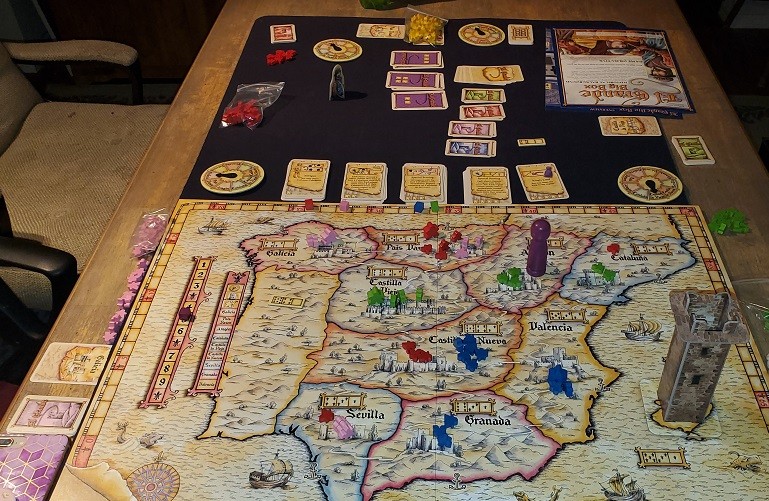 The Large Meeples, called Large Grandes (Does that mean they are Grande Grandes?), show where your leader currently resides. They don’t count toward total troops in that area (they would never soil their hands in that fashion) but do count for an extra two points IF you score first in a region.The same goes for controlling a region where the king is located.

The wording in the manual still has those old school holdover phrases that crack me up. Want to play into a territory the phallic symbol...errr...king is currently residing? You can’t because “It’s Taboo!” No matter how oddly it is worded, moving the King around like a huge DO NOT ENTER sign, can be key to entire games. 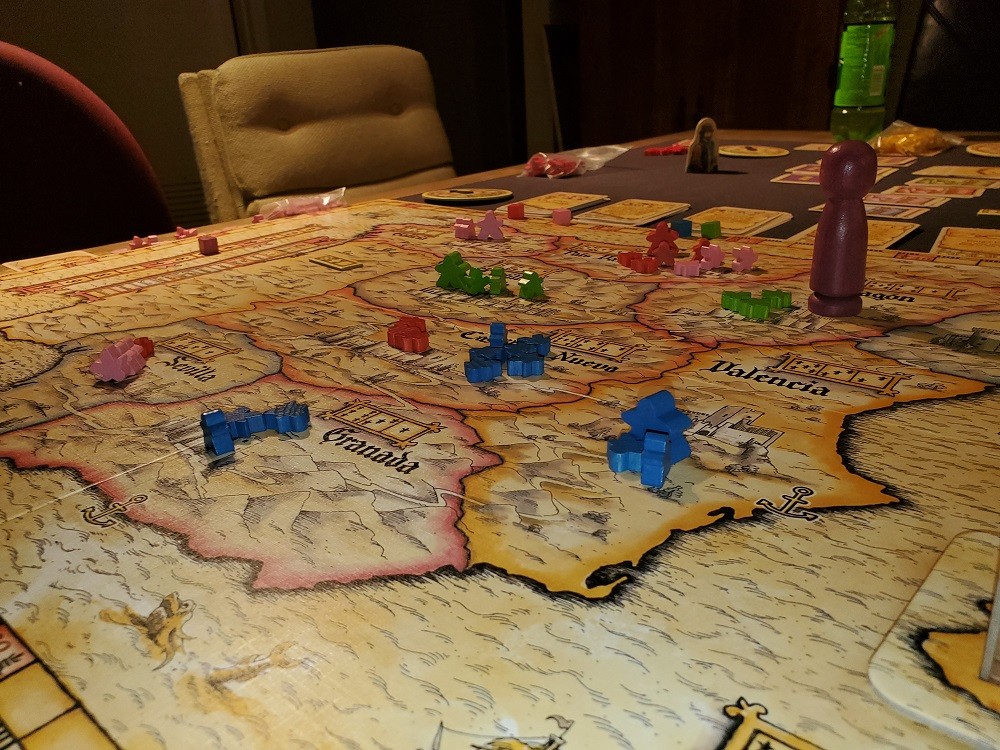 El Grande lets you pull some completely EVIL things, like switching the scoring tile on a contested region to reduce/raise the value. That is some grudge-holding level shit right there. And you can never quite be sure what an opponent has planned, so should you be bidding to deprive someone of an action you think they might want or bidding on the action that you really want to take? And since the bidding cards are limited, maybe you should bide your time, hold onto your higher cards, and make a better move next round? And it is those types of decisions, every turn, that drive and sway the game in a fantastic way.

I guess I should be apprehensive about Big Box editions. The oversized boxes themselves don’t particularly bother me, but looking at the all-in-one boxes I own, some of the expansions have never made it out of the shrink wrap. But after only a couple of months into El Grande, I’ve already broken out the expansions..,.and not due to lack of things to do in the game but just to feel them out and see how they change the gameplay.

Grand Inquisitor & Colonies, Grandissimo, King & Intrigant, King & Intrigant: Players' Edition, King & Intrigant: Special Cards and “Anniversary extension” are the included expansions. However, they all don’t “play nice” with each other (see the rulebook for suggested expansion mixtures). And while I will say that the base game in no way needs any additions to it, the King & Intrigant expansions really give it a different feel. It means you are never truly stuck with a card/action since your bidding cards can also be used as action cards. Honestly, it is a completely different dynamic that uses the same skeletal framework as the base game.It’s like one of those Marvel “What If?” comics where the question is “What If...the entire bidding mechanism at the start of a round of El Grande was conducted quite differently?” (This is also why I’m not in the “creating great comic titles” business.) 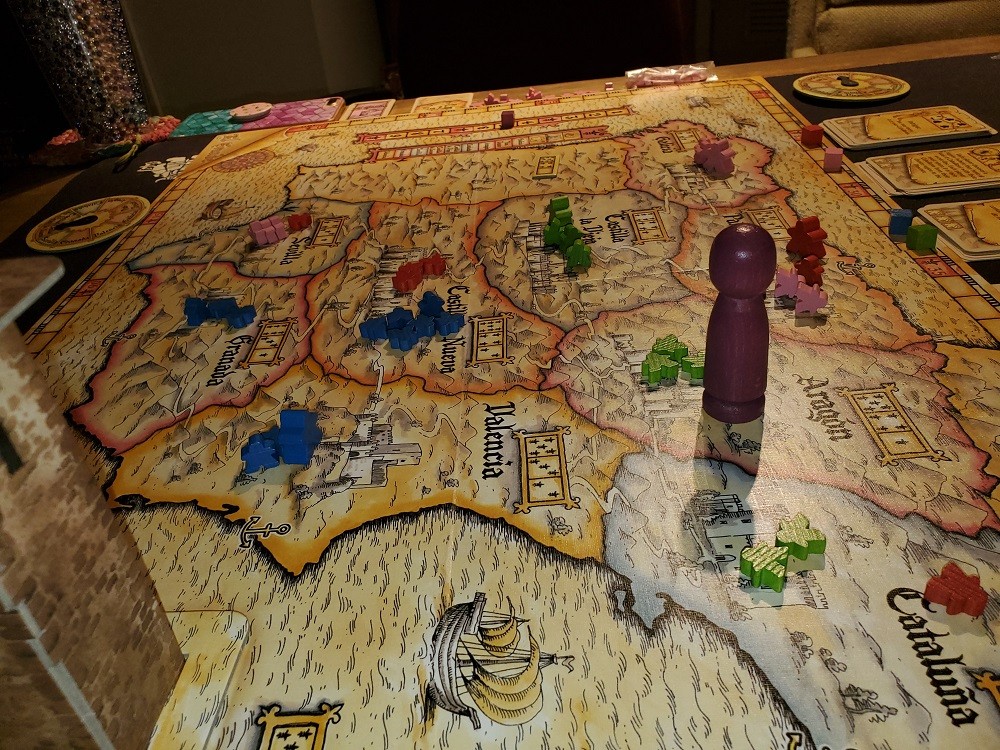 There is a two-sided board to accommodate the addition of the new areas that come with the Colonies expansions. None of the expansions require a complete “relearning” of the base game, instead it is new cards and interesting pieces you can swap into your game.

In its base form, El Grande is a masterpiece. Even more importantly is that when you add in the expansions (which requires the removal/replacement of some pretty intricate pieces) it is STILL a masterpiece, one that allows you to say caballeros without invoking visions of Donald Duck before he broke up the band and went solo. With the Big Box Edition hovering around $50.00 at multiple locations, it could be the perfect time to add this classic to your collection.

March 14, 2020
Rating
5.0
El Grande
In its base form, El Grande is a masterpiece. Even more importantly is that when you add in the expansions (which requires the removal/replacement of some pretty intricate pieces) it is STILL a masterpiece, one that allows you to say caballeros without invoking visions of Donald Duck before he broke up the band and went solo. With the Big Box Edition hovering around $50.00 at multiple locations, it could be the perfect time to add this classic to your collection.
W
WadeMonnig Top 10 Reviewer 195 reviews

Legomancer replied the topic: #309048 08 Apr 2020 10:57
I had this edition and ended up trading it for the plain old edition. I preferred the cubes to the meeples, the old tower is much nicer, and we never touched any of the expansions. El Grande is fine all on its own and doesn't need a huge empty (even with the expansions in it) box to shine.

Legomancer wrote: I had this edition and ended up trading it for the plain old edition. I preferred the cubes to the meeples, the old tower is much nicer, and we never touched any of the expansions. El Grande is fine all on its own and doesn't need a huge empty (even with the expansions in it) box to shine.

Discount Dive is a bit of a strange beast. It is literally what I bought at a discounted price, in this case it was the 20th Anniversary Big Box. I wouldn't have flinched at buying ANY version of El Grande at a discounted price. I have no preference for cubes to meeples but I was surprised at just how bloody well the expansions fit into the base game and how it loses none of what makes it fantastic when you do. Needed? Not Really. Wanted as an alternative? I say yes. I've read statements where players say "I'll only play it with the King/Intrigue expansion." Is that me? No. Is that something I would do to get it to the table? Absolutely.

On the same page with you on dumping a big box where you never play the expansions. I traded away my Shogun Big Box and hope to replace it with a base copy of Wallenstein or Shogun.

WadeMonnig wrote: On the same page with you on dumping a big box where you never play the expansions. I traded away my Shogun Big Box and hope to replace it with a base copy of Wallenstein or Shogun.

Hey, I finally was able to get the "normal" version of Shogun.... except the person had the first expansion and didn't want to seperate them. So, now I have an expansion to unload.

ubarose replied the topic: #332274 13 Apr 2022 12:59
I disliked Big Box so much that I didn’t buy it when it was going for cheap, holding out for a normal sized version to be reprinted. That didn’t happen, so I just recently bought an older copy of the German version. I would rather paste up cards than have that monstrous box on my shelf.

san il defanso replied the topic: #332282 13 Apr 2022 15:05
I'm sure I've told this story here, but the first Christmas that my wife and I were together, my wife bought me a copy of the then-out-of-print El Grande on the BGG Marketplace. I was home visiting my parents when it arrived, and she texted me frantically to tell me that it arrived, and it was a German copy. Fortunately this was back when Funagain still sold the English cards, so my copy is a German one with the little bridge-size English deck.

Still one of the very best games out there. I just love it.
Read More...