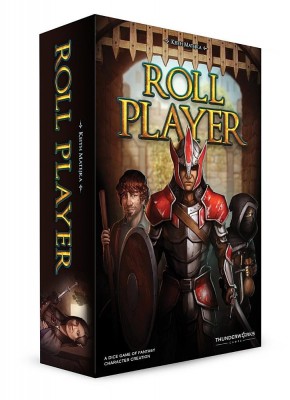 To many people the best part of Role Playing Games is creating your character; Pouring over rulebooks, thinking up a backstory, finding the maxes and smoothing out the mins. Everyone loves a good session 0, where the group comes together and makes characters that will zing off each other for many hours to come.

Don’t you wish you could capture the excitement of a new campaign, the anticipation of adventures to come but without all the work of running an RPG. Well now you can with the new, released in 2016, Roll Player from Van Ryder games, designed by Keith Matejka, and illustrated by JJ Ariosa and Luis Francisco.

Packed to the gills

Roll Player is a chunky game, packed full of counters, cards, character boards, and lots of dice. Ah dice. The black bag of possibility and disappointment that is the core of the game. I’m getting ahead of myself. Put the dice out of our mind for a moment. Roll Player is a game that emulates Dungeons & Dragons(DnD) character creation, but you don’t start out by rolling some stats. Instead we get to find out who you are.

First comes your Race, the board upon which our story will be told. Then Class, Backstory and Alignment. All these mechanically do is give you the parameters for the puzzle to come, revolving around the 18 spaces on your race board where those dice we rattled earlier will eventually come to rest. 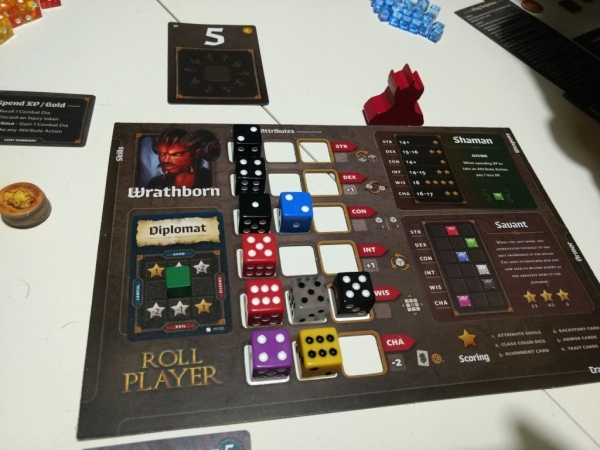 Maybe you’ll be a Wrathborn Shaman who is Savant like with Diplomatic tendencies. I don’t make the rules. (Note that this image includes the expansion. The clear die is a boost die that I will talk about later).

Each row on that race board represents one of the 6 classic DnD stats: Strength, Dexterity, Constitution, Intelligence, Wisdom and Charisma. As you put dice in the slots, their value will fluctuate, your Class card telling you what numbers you want to hit at the end of the game and the points you will accumulate for doing so. Your race will give you bonuses towards some of these stats, changing the difficulty of certain combinations.

Colour is where Backstory comes in, asking you to arrange your dice in a certain pattern of colours, the closer you get the more points you will earn. You’ll also get points for any dice that match your class colour. We’ll revisit Alignment. These mechanics are all good and well but what the setup actually gives you is an amazing foundation on which to build your character. Maybe you’ll be a Dragonkin (Race) Paladin (Class), who is a Rebellious (Alignment), Aristocrat (Backstory). You could be an Elf Barbarian who is a Sceptical Apprentice. The game urges you to find out more about your character, to develop them, to roll those dice and find out what they are truly made of.

Luck be a Lady tonight

It’s time to Roll out the big guns as we get to find out exactly what your character is made of. Starting with just a few dice already in place, each turn of Roll Player goes the same. The first player rolls a bunch of dice and places them in a central draft in ascending value. Everyone grabs a dice and here is where the decisions start to get tricky. Take a low dice and it probably doesn’t help your stats much, but you get to be early to the market phase to buy the good stuff. Take a high dice and your stats boom, but it’s only the dregs when you get to the stalls. This is all made even more agonizing by the fact that you can see what is available in the market as you make your choice! 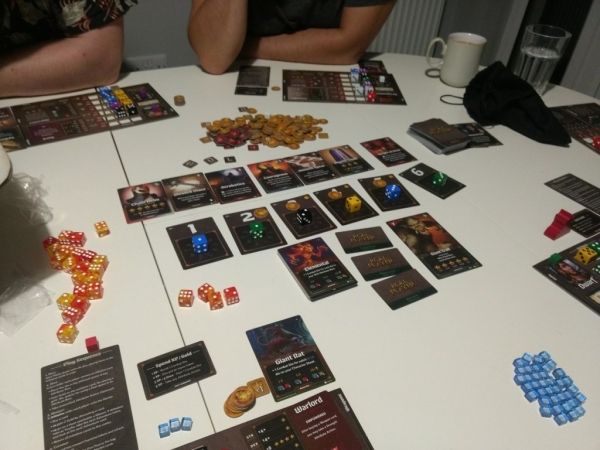 This is a particularly rubbish roll but you get the idea.

You make the choice and take your dice, hovering it over your stat block. Where to put it? Do you try and match the colour requirements of your backstory, or do you really need to boost that Strength stat. Never fear, there is another choice to make! Every stat comes with its own power, allowing you to manipulate your dice as you place them. Stick a dice in strength and you can flip any dice, including the one you just placed, to its opposite side. Nestle it into a Charisma slot will give you some money off the shop. Perhaps you will use Constitution to bump a dice up or down by one to give you just the number you need. As you only get to use a power every time you place a dice in a stat after setup, these are always limited in use making every dice placement a nail biter.

Dice selection finally complete, you all head to the shops, forming an orderly queue based on the dice drafting. Here you can pick up equipment, learn new skills, or adopt traits to help you on your way. A whole world opens up here as suddenly you can get more points from your strength being low as you are Weak (Trait), assemble the perfect outfit or equip weapons and skills that can have all sorts of weird and wonderful effects. Traits when bought and skills when used will shove your alignment around, giving you another facet of your character to poke, prod, and produce points from. 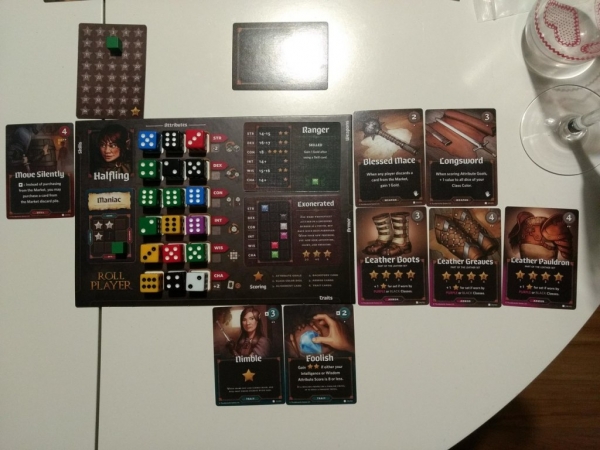 The base game of Roll Player is one of hard decisions, twists of fortune, and devious plays. The puzzle of how to put your stat block together is endlessly compelling and every playthrough gives new choices and divergent paths. It can be almost too much at times as the table descends into silence to contemplate where to put that dice they just picked up.

However, the central dice draft and market phase, provide beautiful moments of interaction as players remonstrate, bargain and eal over what they want. Names are cursed, apologies are made, backs are stabbed and laughter accompanies it all.

We aren’t quite done yet.

Naturally, or inevitably depending on your cynicism, successful games get expansions. Monsters & Minions came out in 2018, and brought with it the idea that as your characters are being forged, they are also preparing for their first big boss battle.

Of course this expansion just adds more of what you love about the base game: races, backstory, alignments and equipment. It also adds a first player marker and some character sheets for noting down exactly how strange your final choices turn out to be. Increasing the player count to five, the game introduces boost dice, ranging from 3 to 8, that aren’t coloured but can be a big increase to a struggling stat.

The meat of this expansion though, comes in the idea that at the end of the game the players will fight a monster and have to prepare to do so. This preparation comes in the form of the Hunt, something you can do instead of going to market. You only get one combat die when going on a hunt, and more come from the rules on the monster. This means it is unlikely that anyone can go on a hunt every turn and gives a lovely flow between going and hunting minions and coming back to the market to stock up on new bits and pieces.

Every time you successfully hunt a goblin, ghoul, or spider you get some information about the monster you are heading towards. On top of this you can get gold, bonuses towards fighting the big bad at the end, and experience cubes that allow you to manipulate the dice on your board a bit more, among other things. As you claim minions as trophies you get the Monster’s Location, Obstacle to getting to it and it’s main Attack. These are essentially some new bits of the puzzle to solve on your board, which if you are able to fulfill allow you to get more combat dice in the final battle and likely more points as a consequence. 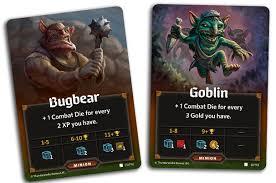 They are so grumpy. Why not kill them and take them as trophies.

I was a little lukewarm on this expansion at first. It adds another layer of mechanics to explain to new players and once mixed in is quite hard to extract. However after a couple of plays, it really feels like a fundamental part of the game and I can’t imagine playing without it. The Monsters & Minions expansion gives the base game more context, allowing you to still make interesting characters whilst giving them a more obvious purpose.

Roll Payer is one of those games that might not be the most elegant or innovative product ever designed but it is just good, solid fun that delivers great stories every time I play. At the end of a game, you will have a winner but every player will have a story of how their character came to be. In the end games are only as good as the stories we tell about them, and this is one that will go down in legend.

Iain bought Roll Player and the expansion with his own money. Some of the images in this piece come from the publishers website.