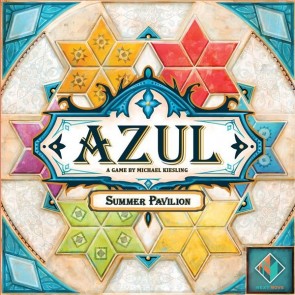 The garden is still wet with dew, yet the sun feels strong enough to make us want to shade under the blossoming apple tree. A perfect spring morning on which to play Summer Pavillion in the garden. It's so idyllic that you can almost for forget there's a pandemic raging outside the fence. Which we do: a priceless distraction paid in mere plastic and cardboard.

Having played Azul several times before, we're confident we can learn this right from the rulebook. In Azul: Summer Pavillion the core mechanic remains the same as its predecessor. We lay out several pools of smooth, chunky tiles. On your turn you can take all tiles of a matching colour from one pool: the rest go into the middle, which becomes a pool in itself. The balance is taking what you need before that pool grows too large to gift too much to another player.

As we scatter the plastic diamonds in the sunlight, doubts over the rulebook begin to emerge. The aim is to complete rosettes of each colour by spending your collected tiles. It costs as many tiles as the number of each rosette piece, one to six, to place a tile in that space. We presume that, like the original, we can't save leftover tiles so we're best off spending as much as we can. But after some head-scratching, rulebook rustling and consulting phones, it seems you can.

Once clear, the game meanders on, feeling as gentle and forgiving as the summer morning. Without the potential punishment of leftover tiles, we can take our time and pick from the pools free of fear. There's even a joker colour each turn you can use as any colour, and a free-for-all rosette in which you can put any mix of colours you like. There are no complaints from the youngest player, no hesitation over what to do or when.

For us older players, though, it's clear there's more to contend with than first meets the eye. The scoring system rewards you for placing rosette leaves in adjacent spaces. But there's an awkward dynamic between whether to take high-cost or low-cost spaces first. It's exacerbated by end game scoring which gives you bonuses for completing whole rosettes, or for filling all the spaces of a certain number.

The first signs of trouble surface with another aspect of the play mat, statues, pillars and windows. If you can surround these with tiles, you get to pick some bonus tiles. Our youngest player hadn't quite digested this and is resentful when people start to pick up their rewards. On final scoring, with the various colours and bonuses, it becomes too much. She declines a second game, put off by the way the seemingly simple rules have blossomed into complex decisions.

We're impressed enough to rack up for a second game. This time, we know what we're doing, what we're aiming for. Lazy in the heat, we click and clack those satisfying tiles in silence, heads down, absorbed in the patterns on our play mats. There is no fear of failure, no raised voices of regret.

And now we've digested the essentials, intricacies begin to reveal themselves. It starts with those wild colours. Tempting as it is to spend the tiles you've accumulated, it's also tempting to save those of next turn's wild colour. And as the game nears its end, it's wasteful to have missing pieces in wild-colour rosettes. Leveraging those bonus tiles becomes important too.

In fact, they become critical. After our final turn, the scores are very close. Azul: Summer Pavillion dictates that players spend their tiles one at a time and as we do so, the tension creeps up with the temperature. I'm first, and to finish one of my rosettes, I need to get some wild colour tiles off the bonus mat. So I complete a statue, nab them both and am sitting pretty.

My opponent can see how this is going to go, what my score will be and what she needs to beat it. It requires she get one wild tile, but when she pulls the replacements for those I took out of the bag, none appear. That's it, a thinking game finished, fizzling out over turn order and random draw.

She doesn't ask for another game but starts packing the pieces away in the box. Then she skips down the path and runs inside, the lure of a phone screen proving greater than the lure of pretty plastic pieces. I sit back on the grass, pleased by the playtime, looking at the box and thinking that I underrated its predecessor, and ought to get it out again, soon.

May 12, 2020
Rating
3.0
Azul: Summer Pavillion
A fun family abstract, but it lacks the bite of its predecessor.
MT
Matt Thrower #1 Reviewer 286 reviews