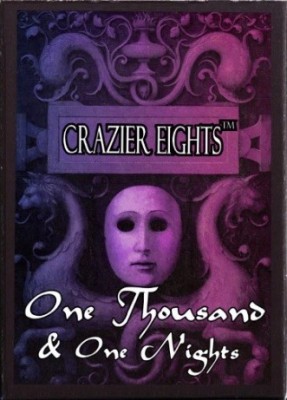 If you are like me, your familiarity with Crazy Eights would lead to to think that Crazier Eights would be a simplistic, fast-paced, card-shedding game. Well, at least one of those is true.

Crazier Eights: One Thousand and One Nights is a Arabian Nights themed version of the Crazier Eights franchise. Every card features the expected suit and number combinations (with the traditional suits being replaced with Ankh, Sun, Moon and Eye) but also have secondary powers: ones that are activated if you play them in front of yourself on your turn. There are one-time “Events” and on-going powers via “Assets.”

Where other card games like Fluxx have every changing rules, those rules are centralized in the middle of the table. In Crazier Eights, you need to see what Asset every person has in play, make sure if they are activated either before or after each turn, double check to see if they are activated on EVERY turn or only on your/their turn. And where Fluxx has learned, over the years, to keep card explanations short and sweet, Crazier Eights has plenty of cards that aren't a just a simple sentence but stretch out into a paragraph.

As in the original Crazy Eights, the main goal of the game is to get rid of all the cards in your hand. But, with alternate win conditions added via the asset cards: an alternate goal might be to have five assets in play to win...or anyone with more than five assets to immediately be eliminated. It also has a real “Crush the leader/King of the Hill” flaw. If someone is shedding cards quickly, everyone else will dog pile them with extra cards or use powers to remove their Assets from play. A few evil “A player of your choice draws Four extra cards” type cards can put a crimp on anyone's lead. 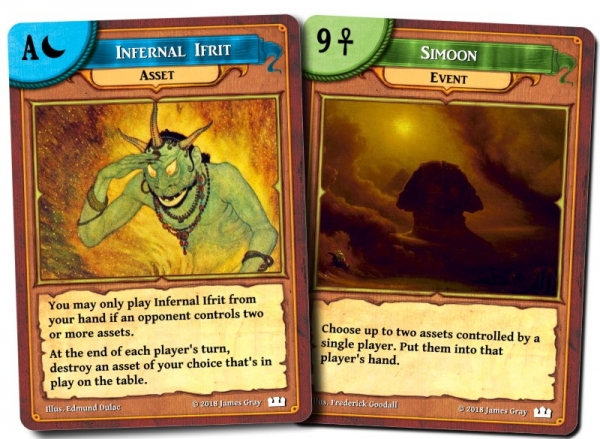 The first few plays you will be too focused on the card powers to actually take in the artwork (which, when you actually get around to checking it out, is pretty fantastic). Each game will start with you dealing seven cards to each player, who will organize them by suit....and then spend the next few minutes reading each and every card to discern it's powers. And, until you get a few games under your belt, most of them will make little to no sense. It definitely lacks a pick up and learn as you go vibe.

It might be called Crazier Eights but it feels more like Busier Eights. Tracking and executing Assets feels more like work instead of feeling like you are firing off a strategic strike at an opponent. It is a filler length game that lacks the instant accessibility I want from a filler. The complexity (the in-depth reading requirement of Assets and Events) also puts it out of the age range of my typical Crazy Eights opponent, my seven year old niece.

May 19, 2020
Rating
2.5
Crazier Eights: One Thousand and One Nights
It might be called Crazier Eights but it feels more like Busier Eights. Tracking and executing Assets feels more like work instead of feeling like you are firing off a strategic strike at an opponent. It is a filler length game that lacks the instant accessibility I want from a filler. The complexity (the in-depth reading requirement of Assets and Events) also puts it out of the age range of my typical Crazy Eights opponent, my seven year old niece.
W
WadeMonnig Top 10 Reviewer 195 reviews