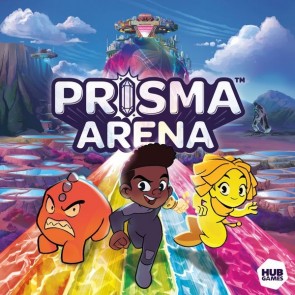 As we adjust to a new reality on a daily basis, it is good to be able to take comfort in the familiarity of games. For many of us that means turning to digital platforms and Jamie and I had the pleasure of doing just that with Michael from Hub Games. The company is currently building up to a release of Prisma Arena, a game of fast action, strange creatures, and lots and lots of colour.

One of the things I find catching my attention more and more as a critic is the art style of a game. There are so many games to sift through now that having a distinctive art style helps a game stand out from the crowd, and grabs the attention. Prisma Arena does just that with its “Saturday morning cartoon” aesthetic, background story all about emotions and battles, and bright colour palette. 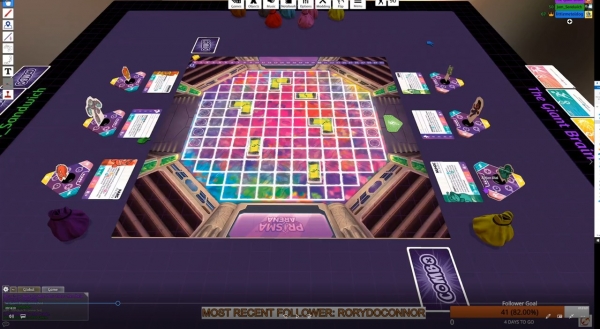 The core of the game is simple. Each player has a team that enters the arena with a Hero and two Mo’Kons. These are creatures that embody a particular emotion: jealousy, rage, , . Each team takes it in turn to move and fight with one of its members, seeking to bounce (defeat) the other team’s fighters. Doing so awards you points and once a player hits 20 the turn finishes out to see who is top dog.The combat here is not the blood and guts of something like Warhammer Underworlds, instead team members can spring back into action after being knocked out none the worse for wear. It's fast & furious with every character capable of simple moves, as well as melee and ranged attacks. That these are effectively the same for each character allows the players to concentrate on tactics, and some tasty combo action. 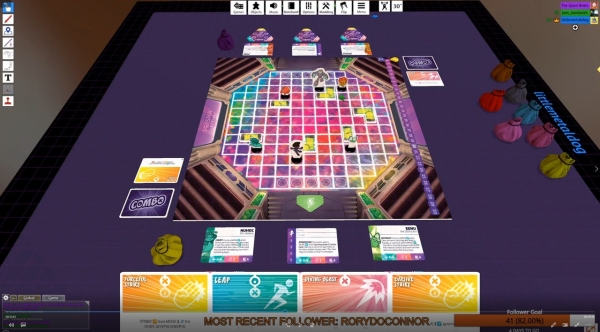 Some combo cards at the bottom of my screen

Each player has a hand of cards that give them access to some extra actions they can take with a given character. Whenever you choose to move, strike or shoot you can choose to chain some of these cards onto the action, following the order of the symbols on the cards. With this elegant system a straightforward blast can become a dive across the battlefield, taking down one Mo’kon and causing damage to another. It provides for moments of high drama and its simplicity again allows the players to concentrate on when, not how. 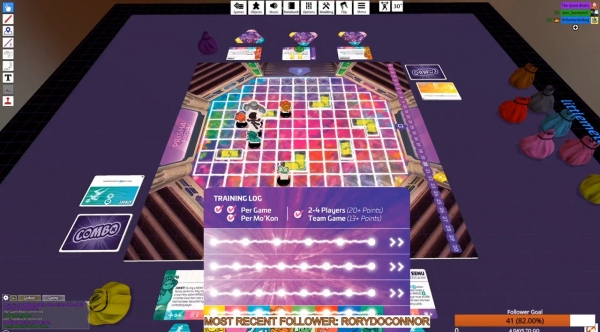 The back of a hero card that will allow you to level up. Notice it rewards you for varying your team and playing with different Mo'konLooking Forward

Michael chatted to us about the plans for the game as they take it to Kickstarter and support it once released. You’ll be able to level up your Hero over the course of a campaign of games, customise them with fully removeable stickers, and locate places to play in tournaments, leagues and all sorts of organised play at your local games store. Hub Games have ambitious plans for this title and it’s good to see a company thinking long term on a property when so many seem to treat their games with a hit it and quit it mentality.

If you would like to see a full game of Prisma Arena with Jamie and I you can check out this playthrough we recorded with Michael from Hub Games showing us the ropes.

Prisma Arena is a bright, fun game with more depth to it than is immediately apparent. It is easy to learn, plays fast and is full of dramatic moments. You can check it out on Tabletop Simulator now and it will be coming to stores later this year.

Jamie and Iain M played Prisma Arena with Michael from Hub Games. We played online using Hub Games' own mod on Tabletop Simulator. Final product art may vary. The images in this piece are captures from our Twitch stream.