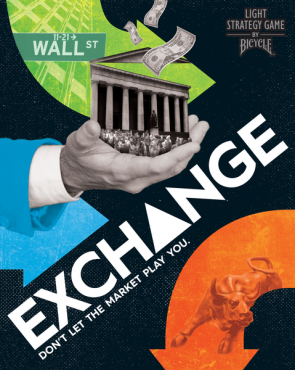 The year is 1999: The gang controlled areas have become known as Free Fire Zones, the police will not enter....

“The year is 1792, and you and 23 New York City stockbrokers just signed the Buttonwood Agreement. In a few short years, this group of brokers would be known as the New York Stock Exchange.”

* Glances at the Exchange Box art * Love the Wall Street 11-21 sign... It really accents that the Buttonwood Agreement was signed outside of 68 Wall Street. Nice offset Fifty Dollar bills on the cover too...very time frame accurate. Maybe I am being too picky but these are just a few of the things about Exchange that didn't ring true to me.

Exchange is Bicycle Games take on the Stock Market a.k.a. The Billionaire barometer: Only in Exchange, it is you that causes commodities to rise or fall instead of it depending on if Jeff Bezos had a fight with his yacht mechanic or Elon Musk tweeted something stupid. The game lasts five rounds, and each round is made up of Three phases; 1.) The Stock Selection Phase, 2.) The Buy/Sell Phase, & 3.) The Market Influence Phase.

During the selection phase, you put the desired card/stock (Banks,Bonds or Insurance) face up in the phase sleeve and then place it face down on the table. When all players have made their decision, players reveal what item they will either be buying or selling during this round. This allows players to see what other people are planning to deal in, so they can adjust their strategy during the following phases.

The second phase you choose a commodity, if you will be selling or buying and how much of that item you plan to move.

Finally, players get to adjust/manipulate the market, by moving the price of a single item up or down. A Market Forces card will also be drawn, which produces a random effect on the market. The commodity that you choose doesn't have to be the one you are buying or selling this round but, of course, it usually will be. After the price for each stock has been adjusted, players complete their phase two transaction with the bank at the new market price, being mindful of the Market Bubble which can flip the price of a stock if the price of the “stock” gets too high or too low. You then repeat this process until you have completed five rounds.

Whoever has the most cash on hand in round 2,3,4 will be allowed to cast a second “lobbyist” influence vote. You don't have to spend the money, just have the most. (And, one assumes, pledge some of the profits to a re-election campaign). Yep, sure sounds like nothing shady is going on. Speaking of which, you can also spend $50 to peek at the rounds “Market Forces” card (the one random element that manipulates the market each round). The game calls it “Market Intelligence” but I think the judicial system refers to it as “Insider Trading”

At the end of 5 rounds the player with the highest net worth (value in stocks + cash) wins the game.
“Don't let the market play you” (the tagline that sounds like it was ripped right out of a 90's video game advertisement) is one of the misnomers about the game. The Market Forces card is the only outside influence of the Exchange. Everything else is manipulated by you and the other players. If you are looking for a game that allows you to anticipate supply, demand, and reacts to innovations in the economy, this isn't it. “Buy Low and Sell High” may be a trite saying but Exchange only has three different commodities you can manipulate, so it fits the simplistic gameplay.

The Exchange isn't in-depth enough for players looking for a true market simulator and, at the same time, is too milquetoast to intrigue someone who has little taste for the NYSE. It falls uncomfortably between simplistic and unrealistic but... at least it is less painful than checking the status of your 401k.

June 21, 2020
Rating
2.0
Exchange
The Exchange isn't in-depth enough for players looking for a true market simulator and, at the same time, is too milquetoast to intrigue someone who has little taste for the NYSE. It falls uncomfortably between simplistic and unrealistic but... at least it is less painful than checking the status of your 401k.
W
WadeMonnig Top 10 Reviewer 195 reviews