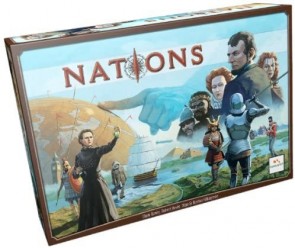 Be careful what you wish for...

“Can I order a #7: The immersive civilization-building board game? And could you hold the direct military conflict?”

“Sir, this is Burger Bell....but I really think leaving out military conflict in a civ building game would be like ordering a Sandwich without a bun. I mean, don't you need it to hold everything together?”

“Look, do I need to speak to the manager? Can you do it or not?”

Sighs “Sure. Would you like that with a side of Engine Building? It comes with the #7 combo.”

“Engine Building? With a Civilization game? Are you sure? I don't see that ingredient listed on that one board game website.”

Chewing sounds “I don't know, kind of tastes like Engine Building to me.”

Yes, I “ordered” a civilization game without direct military conflict. Direct military conflict is something my wife always says she doesn't enjoy in most games. So, I searched around and, lo and behold, Nations was exactly that. However, if you think conflict is missing, you would be wrong. Literally everything in the game is based on who is leading on a specific track and everyone is penalized based on how many other players are ahead of them on a track. It's not a scene, it's a god-damn arms race...until the other players abandon the race, leaving you virtual miles ahead, having committed your resources to something they aren't even bothering to gather and then you realize you are lacking in so many other areas. It is probably more “In your Face” with it's indirect conflict than titles that allow you to rampage though other player's Nations.

While there is no direct conflict in Nations, Military strength is important. It can actually be even more important than in games where there is direct conflict. One of the linchpins of Military strength is that it determines the turn order, which is a key luck mitigation aspect. You absolutely want first access to the cards that come out. These cards are one of my issues with Nations: The luck of the draw can stop the game in it's tracks. The tableau of what is available to purchase can be devastating if what you want/need/anticipate doesn't come out. Sometimes you need a building to come up to increase the output of stone and it just doesn't show up. Or you put yourself in a position to take advantage of some colony cards showing up in play but none appear during a specific round. This can literally be, if not a game killer, a enjoyment killer. Luckily, Nations has been out long enough that players have come up with ways to mitigate this luck. You won't find this is the manual but experience has proven to me that this is the way to “fix” that. It might not be the most interesting read, and it takes a bit longer to do set-up each round, but I definitely suggest you use this chart:

Many of the other aspects of Nations are familiar. Should I short myself on X resource to gain Y resource? I mean, I need rock, I ALWAYS need rock. It's the cornerstone of my Empire (rim shot). Stability counteracts Military when it comes to penalties, so building a stable nation over a militarized war machine is a legitimate approach...usually a desirable one if one player is pursuing Might and you want to avoid the previously mentioned arms race.

Of course, you will have the inevitable Through The Ages comparison. Yes, Nations is a shorter (time-wise) game but that is somewhere along the lines of saying “The Hundred Years' War was longer than the “Sixty Years' War.” Both require a commitment of a good chunk of time. Players will finish a game of Nations and exclaim “Wow, that was long and brutal!” and anyone who has played TTA will just raise an eyebrow. The game states it will take about 40 minutes a player, which is pretty much dead on. You can dip your toes in with a shortened game (also noted in the manual) but it isn't entirely fulfilling. Ending after two or three eras means you never get to some really cool era cards. But I will say that the manual is through in giving you plenty of tips/tricks/variants that allow you to get exactly what you want out of it. The asymmetrical powers side of the various countries are a great advanced addition and the level of experience adjustment that is printed right on the board means that you can adjust the difficulty based on your ego and the new players don't feel like they are receiving charity.

One thing that I do like about Nations is that all the cards are NOT going to come out in every game. With Through the Ages, every one of the cards will eventually come out whereas Nations has the pro/con of not having every card from every age available every game. I do appreciate the randomness and it eliminates players waiting to pounce on one specific card when it comes out because you are not even sure if it will come out.

I was extremely satisfied with how Nations circumvented direct military conflict but, I can't say my wife was completely contented with getting what she wished for. With the variety of tracks, you inevitability feel like you are “losing” on more tracks than you are “winning” on. I rarely gives you the happy-go-lucky “Look at my cute little nation!” feeling. Instead, you feel like you are lacking or coming up short in a variety of different ways. In short, If you get enjoyment in watching your kingdom grow and flourish, Nations doesn't exactly provide that. Instead, it is more watching it survive and try to claw itself into the lead.

There are no user reviews for this listing.
Already have an account? Log in now or Create an account
Discuss this article
Log in to comment
Posts in discussion: In Order to Form a More Perfect Union: A Nations Board Game Review

Not really, it's much closer to Through The Ages than anything else - fun fact time, it actually started life as an alternate ruleset to simplify TTA for a second edition before eventually splitting off into its own game (cf. designer Rustan Hakansson's own words) so it is very specifically a more accessible variant of TTA.

I would personally rank these three games in the order of Nations > TTA > Tapestry, but only because I found TTA a bit tiresome and repetitive after a while with all the cube pushing and the nonsense that goes on when military escalation dominates play. Nations has this neat mechanism governing stability which gives you a defence against the ravages of war and allows you to step outside of the arms race that often seems to happen in Civ games. The tracks operate in a similar fashion to the military track in TTA in monitoring relative dominance in various arenas rather than being the motive force behind gameplay as in Tapestry. I also recall the asymmetrical factions being pretty interesting in how they shake up the strategic approach for each player.

I did not like Tapestry at all. Nations was kinda fun for a while, and although I left it behind years ago I'd play it again. I believe that there are digital implementations and a mod on TTS if anyone is up for it.

ps good to see you posting content again Wade. I hope all is well.
Read More...