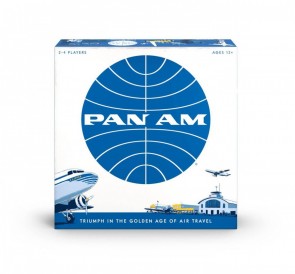 Prospero Hall delivers their best work yet in this Funko-published masterpiece.

One of the most brilliant things about Sid Sackson’s Acquire is how it models corporate mergers and acquisitions. What eventually happens over the course of the game is that one company gets larger and larger and eventually starts devouring the smaller businesses on the board. Shareholders in the consumed businesses get an option to trade in their shares for the defunct company for shares in the juggernaut that ate them – essentially pledging fealty to their new corporate masters.

But I’m not here to review Acquire- in short, one of the greatest games ever published. I’m here to have a look at Pan Am, a new Prospero Hall design that is one of the best business games I have played in recent memory. It’s a stunning piece of work, a highly refined and studied design that may very well be the closest a mass market, mainstream title will ever get to 18xx or even something like Power Grid. Yet conceptually, its gameplay feels wholly accessible, with easy to grasp ideas and goals. It’s also beautiful to look at, centering its visuals around the classic blue and white Pan Am logo and an overall midcentury modern aesthetic that captures the “Golden Age of Air Travel” idea and presents information in a clean, clear, style.

It is very much a game about the history of Pan Am, the most innovative and influential airline in the history of the industry, and I think it is just absolutely brilliant how the company is depicted. This is where that Acquire reference comes into play. Each player represents the head of a small regional air line, working to secure routes, airports, and a fleet of planes. But then, when Pan Am gets going from its original headquarters in Miami, they start eating up the smaller routes. Over the course of the 40 years the game covers, the smaller airlines are absorbed by the corporation and the players who sell out to them get paid. They then take this money to either pay for the operating costs for bidding on acquiring routes, airports, and a fleet in the worker placement-driven Engineer phase or they can buy stock in Pan Am, which fluctuates based on a price set by an event card each turn.

I’m not sure if Prospero Hall intended to make a game with the real-deal Pan Am license that has a specific message about corporate business and capitalism, but maybe they did? Maybe the history of Pan Am, sprawling out across the globe like a virus in Pandemic, is used here to show how corporations expand, consume, and assimilate competition? Maybe there is a message here about

It’s all navel-gazing, really, because beyond the subtexts (if there really are any), this is a tremendously fun, competitive and easy to play game. The Event Phase gives you a little historical headline, a real-world event that may impact your plans for the round. In the Engineer Phase, you bid your engineers and a few on-board tracks to claim destination cards and build airports, which you have to have to grow your airline. You’ve also got to use these to acquire bigger and better planes, which are needed for the longer haul flights. Or you might put one of your Engineers on the Directives track to claim an action card. Then, the resolution phase has you executing these actions and creating a tangible sense of infrastructural narrative. And the Pan Am phase hits, and you want to see that roll come up on one of your lines, like you’ve baited this monster to come and eat you up.

The bids on the tracks can skyrocket quickly – the spaces are limited and with a full table of four the auction action is hot. The race to take Destination cards can find you on the back heel, overbidding or winding up without what you need to secure landing rights for a route you want. Or you might be outbid on acquiring one of the lovely little plastic planes you need to claim a route at a crucial moment. This is definitely not a passive-aggressive game of staring at player mats and wondering how to maximize efficiencies. It’s about opportunities, outspending the other folks, and earning enough money to have the best chances of being acquired and get the big payouts...so that you can finish a shareholder rather than a proprietor.

I absolutely love this game and in terms of raw design, this is the best thing that Prospero Hall has produced to date. It’s an instant classic, a very modern game that also manages to feel like a vintage design from 20, 30, or maybe even 40 years ago. You get a sense that the designer or designers (since we really don’t know) understand what it means to be influenced by and informed by previous mechanisms and concepts without emulating or duplicating them, instead evolving and expanding them. Even as much as I’ve enjoyed watching this company come out with great game after great game for the past year or so, this one really took me by surprise. Even after the genius of Villainous and Jaws, I just did not expect such a great, sophisticated economic game to come from this group. Without a doubt, this is the best game of 2020 at least here at the halfway point.

July 02, 2020
Rating
5.0
Pan Am
A brilliant, accessible business game that may or may not be a sly commentary on corporate capitalism.
MB
Michael Barnes Top 10 Reviewer 137 reviews

Getting mentioned in the same breath with Acquire is high praise (I'm trying to avoid altitude double-entendres and having a devil of a time) and Acquire's rules are dead simple. It could sell to a wider audience. Regarding complexity, where would you put Pan Am?

Rules complexity is pretty light, especially for a hobby crowd. For a mainstream audience, it’s somewhat more complex than TTR, but I the think the concepts are concrete and well-explained enough that it can play broad. There is one slightly over-complicated bit- securing landing rights means either having airports or pairs of cards keyed to destination or region. It’s kind of a “check the rulebook” thing for the first game.

The rulebook is really, really good though.

Still, my prediction: MB will be selling this before the winter holidays.

Vysetron replied the topic: #311685 04 Jul 2020 17:06
This game's the real deal. One thing it manages to accomplish that really impressed me is how it avoids dumping math onto the players. A lot of economic games force you to calculate a lot, but Pan Am never overwhelms with numbers. It's incredibly well designed in that regard.