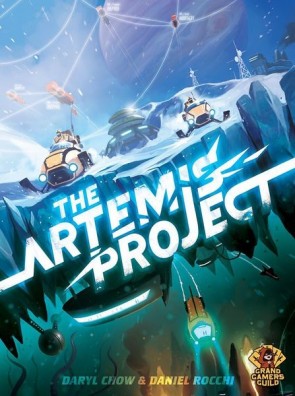 The Artemis Project is, let’s be honest, a box you’d walk past in a game store. The title doesn’t mean much. The lid, on which Skidoos zoom over a frozen ocean, doesn’t tell you much more. The gameplay, listed as dice placement, resource management, engine building, is the most identikit part of all. So when I got a recommendation to play it, I was not inspired.

But friendship is the lifeblood of board gaming, so I trust recommendations and I decided to give The Artemis Project a go. It was soloable which is a big bonus while we’re all confined to quarters and is a guarantee it’s going to get played. The frozen ocean, it turns out, is on Europa, a potentially habitable moon of Jupiter. The players are terraformers. There’s quite a lot of other fluff which is needless and far less interesting than all the bright coloured dice in the box.

See, three out of the six stations use the rather brilliant Exposure mechanism. Those three net you the game’s three key resources: energy, minerals and colonists. All tend to be in short supply. The higher the dice you place, the more you’ll get. Except players who add lower dice get to go first. So that four energy you were counting on this turn to keep your colonists warm and alive? That’s all gone to the two players who put a 2-value dice and queue-jumped yours. And we all know how much everyone hates a queue jumper.

During my first solo game, I discover that The Artemis Project seems tailor-made to generate industrial quantities of hate. There are four different kinds of colonists, some rarer than others, and they’re an impressive source of points. One station lets you train one of your existing colonists into a rarer kind. So, of course, only one player per turn can use it. Colonists staff buildings which give you special abilities and points. You get them by using dice to bid for them so, of course, you’re outbid every turn. I had no idea it was possible to hate cubes of coloured plastic quite as much as I do by the end.

Still, I’ve struggled through and managed to collect fourteen points which seems a heroic total. Until I check the solo rules and discover that anything under twenty counts as “tentacle cleanup crew”. I’m too enraged to try again so I throw it all back in the box in a huff and stalk off.

Whilst I fume, my brain can't help but make comparisons between The Artemis Project and Alien Frontiers. Both are dice placement games with a sci-fi theme that wrap in around an hour. But the comparison isn't entirely apt. The Artemis Project is easier to learn and, although it doesn't have the potential for direct attacks that Alien Frontiers has it is, overall, a much meaner game and the event and mission cards give it more variety.

I can’t leave such a severe beating by mere plastic without comeback. So I do come back and try again. This time, I’m better prepared. I make more use of toolkits, an item you can acquire and spend to nudge a dice result by one pip. It lets me sneak dice into the front of queues and atop bids by the least possible. I shepherd my resources with care, ensuring I have what I need each turn.  Most of all, I think hard about the scoring conditions from the outset and plan ahead. This time I get a respectable 27, a rank of "macro manager". There are higher tiers to aim for. But this is clearly a game designed to be as mean as possible to as many people as possible, so it’s time to try the multi-player.

At first, this doesn’t feel quite as claustrophobic as I’d been expecting. Solo, you’re playing three players with the resources for two. There’s a bit more to go round with three real-life players. So at first, everything is amiable. The other station in the game is mission cards, where players contribute dice toward a high total in hope of a reward. You have to contribute to at least two or face a penalty so we co-operate and ensure everyone gets their brace early. It’s the friendly solution to the Prisoner’s Dilemma writ large.

Mid-game, things hot up. We’re struggling with a lack of one kind of colonist, the red Marine. The pool of colonists available each turn gets drawn at random from a bag and they’re just not appearing. So the struggle at the recruitment and training stations hots up. It costs energy to recruit colonists so that means we’re all trying to undercut each other in queue for energy cubes. And that, in turn, means there’s space for a cunning player, like me, to bid on buildings for cheap while everyone else is busy.

There are two kinds of buildings in the game. The first three turns have one “ocean” building drawn from a deck per player to bid on. These get you extra resources or colonists or actions once they’re staffed with the appropriate colonists. The final three have one “surface” building per player and these are for points. I’m bidding as we make the switch on the fourth turn but one player, to my surprise, hoovers up the remaining ocean buildings for cheap.

I presume that player just lost, wasting resources on extra actions as we’re moving into the drive for points. Over the next three turns, though, it looks wiser and wiser. The other player and I are knife-fighting for scraps. We're trying to pull together the resources we need each turn to scrape a few points but that means making horrible inefficiencies. She, meanwhile, watches serenely as her ocean buildings pour resources into her coffers. On the last turn, she snaffles up and staffs two big scoring surface buildings without breaking a sweat.

In the final reckoning, it’s close, since we’d spent two turns on surface buildings to her one, but she takes it. It’s a neat lesson that there’s more than one way to terraform a barren, inhospitable moon. I and the guy I’ve been squabbling with feel exhilarated but the winner is cooler, despite her victory. When I ask why she gestures to the event cards and the mission cards. “I still don’t know what the game is about,” she says. “A few pictures of aliens don’t mean it’s got anything to do with outer space.”

And when I fit that nondescript lid back on the nondescript box, it’s hard to argue. You might have to spend energy each turn warming colonists who aren’t in buildings, but why are the queueing up on the planet surface for you to recruit? But the thing is, the game inside the nondescript box isn’t nondescript at all. It might not describe a mission to an alien moon, but it does describe how people can fight, betray and undercut each other for an edge whenever the going gets tough. And in these lockdown days, that’s a lesson worth remembering.

July 03, 2020
Rating
4.0
The Artemis Project
Superior game in the worker placement mold but with dice and a surprising level of cut-throat manoeuvring, but it falls down in representing any kind of theme at all.
MT
Matt Thrower #1 Reviewer 286 reviews