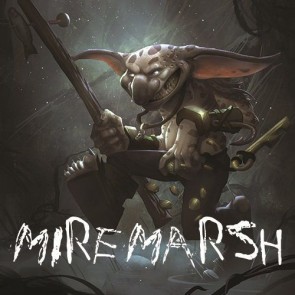 Miremarsh didn’t land with the swampy splash the designer must have hoped for. It bubbled under a lot of people’s radars and initial reports weren’t positive. So it sat, ignored, on my shelf for weeks before I took a dive into the rulebook. And what I found there was astonishing: a silly, charming push your luck game about driving goblins through a terrifying swamp in the hope of surviving long enough to commit some goblinesque atrocities. It felt like a must-play.

As soon as I tried, however, I found out exactly why the initial reports were not positive. The Miremarsh board consists of three rings of face-down hex tiles which flip to reveal encounters of increasing danger. The four evil “quest” tiles lie beyond, face-up, and you must complete one to win. Your goblin starts with a cool miniature and a pile of cool customised, symbol covered dice. To survive a tile, you have to be able to match its row of “mandatory” symbols with your dice.

You see the problem? Or rather, you can’t see the problem: blundering onto a face-down tile and finding you can’t match the symbols means instant death. If you roll an eye symbol you can peek at an adjacent tile. But if it turns out to be a lair, it gets a random face-down monster that you need another eye to peek at so you’re back to square, or rather hex, one. Each player has a pile of fish that acts as a turn counter: run out and you’re permanently eliminated so there’s a constant pressure to keep risking it.

We can all see the design lineage back to DungeonQuest and other games where you send your cardboard avatar hurtling into the unknown and hope. Games that teeter on the precipice between the emptiness of roll and move and the thrills of narrative gambling. But Miremarsh wants to give you that little bit more control and the extra weight sends the players toppling into the ravine. When you know you have no control, you can embrace the chaos: with some control, the same chaos becomes infuriating.

Or does it? Death in Miremarsh is not the end. There’s a pile of goblins depending on the number of players, so you just drop your loot in the swamp, grab another gobbo, and start again in the middle of the board. None of us has ventured far enough into the murk to get any items so the stack simply dwindles, fast. And as it does so, I spot an opening: you can also win the game by being the last player standing. Given that everyone draws new goblins from the same pile this seems monumentally unfair. But there it is: Miremarsh doesn’t have much interest in playing fair so I don’t either, and I walk away with the win.

The other players walk away from my table. But I’m left with the sense that I must have missed something. So I go back to the rulebook and as I flip the pages a conviction begins to grow that Miremarsh has, in fact, been the victim of its own atrocious rulebook. It’s not so much edge cases, although there are some - and, I later learn, a serious misprint on the board (slaying Grabby nets you a fish). It’s more that there are important logical caveats in the rules that are not spelt out. The biggest of these, for me, is that once you’ve completed a mandatory challenge you can stay on the tile and carry on the optional challenges next turn.

This is important because to defeat a monster you have to complete all the mandatory and optional challenges. And the quickest route to extra dice, spells and pets for your goblin is to get the rewards of defeating monsters. Understanding this can be done stepwise is thus huge and turns the game from a total crapshoot into something where you can roll with the punches.

Excited to get out all that sweet art again, I get the game out for a solo session. In this, you have to complete two quests with a stack of four goblins and nine fish. It doesn’t seem a lot, especially as I start out throwing myself into the arms of fate again and again, with oblivion my only reward. But in a second game, I try to slow down. I don’t risk tiles I haven’t been able to spy out.

However, once set up the game is easy to reset and run again. So I give it a third try. And this time things fall into place. My goblin, Stiler, poles through the swamp, defeating a giant spider then backtracking to spend the gold on a pet. I draw a Sick Dog, carrying a hand in its mouth, which gives me extra movement and will carry an item for me. Venturing into the second ring my dice roll an unfortunate lake monster attack but I defeat it and gain an extra fish. And so I swim onward, my first quest despoiling a halfling’s garden, my second to kill a unicorn. Evil deeds done I sit back, victorious.

There’s certainly enough here to be worth another crack at multiplayer. Carefully pointing out the important consequences of the rules, we pile, in. We laugh as goblins are eaten by the swamp hag, taunt each other as goblins tumble into sucking bogs, get a bit uncomfortable when one goblin acquires an orc slave. It’s good fun, even when victory comes down to the last goblin standing again. But having seen most of the tiles, now, it’s hard to escape a nagging sense that we might have been better off just playing DungeonQuest instead.

Yet for all its flaws, Miremarsh has the sense of being a keeper about it. The miniatures and art are fantastic, it’s fast and fun to play, even the strapline “a game of death, tentacles and evil deeds”, is endearing. Later that day, the designer picks up my Tweets about the game and I suggest to him a FAQ might help fix things, to help people understand what kind of game this is. If we had one, I think it might do better: a goblin can be forgiven for having some warts, after all.

This FAQ was released a few days after this review went live: enjoy!

July 16, 2020
Rating
3.0
Miremarsh
Miremarsh succeeds in adding control and complexity to the classic push your luck adventure formula, wrapped in a winning theme, but it's hampered by bad rules and a lack of variety
MT
Matt Thrower #1 Reviewer 286 reviews

OhBollox replied the topic: #312518 27 Jul 2020 15:21
This sounds worth a try at least. I have to be careful or I just end up picking up most of the games Matt reviews. Only just got Undaunted North Africa.

OhBollox wrote: This sounds worth a try at least. I have to be careful or I just end up picking up most of the games Matt reviews. Only just got Undaunted North Africa.

Sorry. If you wonder why I generally post 3*+ reviews it's because I just don't write up games that don't appeal. Life's too short and there are too many games.

I'd do the research, or wait for a FAQ, before investing in this one. Maybe download the rulebook and see if you can find a playthrough to watch - there's a bunch on YouTube. It's fun but it's not for all tastes and it's really unfortunate how it's defeated by it's own rulebook

mgreen02 replied the topic: #312570 29 Jul 2020 09:10
Totally fair review. Thank you for taking the time, Sam and I (there are two designers) have been talking it through this morning. We haven't published many games, we are very much still learning and we will learn from MireMarsh. I don't think the initial reports were bad pe se- I think they were almost completely absent (unless I've missed something). For us, then, working out what we did right and wrong with the game becomes really tough and makes a critical review like this incredibly useful.

A FAQ. Yes. I got onto that after the tweet exchange:

We are still discussing where exactly to put it given that Room17s website is down. It is likely to find a home on the BGG files page.
Read More...