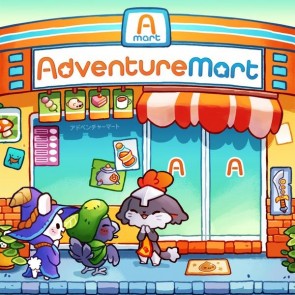 Are you management material?

Adorable JRPG-influenced Chibi illustrations, a cheerful and friendly aesthetic, and a surprisingly well done economic game are what defines the charming Adventure Mart. This release from Hub Games is a deckbuilder that leverages a fairly standard deckbuilding format to put players in the role of managers of a chain of RPG item shops, tasked with procuring stock, fixtures, and staffing while profiting off of a queue of customers looking to drop some coin on adventuring gear. It’s a darling game that turned out to be more nuanced than I expected, although I’m coming away from it feeling like it is one of those “almost” designs that gets really close to something special before running out of steam before it crosses that line.

Most of the mechanisms are familiar and stating that this is deckbuilder, for most readers of this review, will tell them all they need to know about the process and flow. Dominion has cast a long, long shadow in the years since its release and it would be easy to dismiss Adventure Mart as another in a long, long line of also-ran deckbuilders scrapping amongst each other in the wake of the most successful brands in the genre. But this game does something quite unusual- instead of building up a card mix to do damage to a big bad, produce more of a resource, or combo into an advantageous sequence of plays, the idea is that you want to generate a regular hand of saleable Stock cards and you are in direct competition with the other players when an Adventurer card is turned up and comes round the shop looking for Martial, Magical, or Exotic items. And this is settled the old fashioned way – with an auction.

Each Stock card you procure, beginning with your starter deck of fairly crap cards, has a star value in addition to its retail cost. Adventurers will want one or more of the item types, so you look at your hand and play based on the stars. The next player has to produce a better offer from their hand, and so on around the table. You might want to go big and play a lot of cards to score a customer, or you might want to hold back for later in the round. Or, you may want to try to run everyone else out of cards.

Now, the catch is, the adventurers only have so many coins to spend. So your big, tempting 15 star offering may also mean that you are going cheap in the sales, spending five Stock cards to earn 8 coins while the retail value of your offer might be much higher. It becomes an exercise in balancing the quality of your offer with your actual payoff along with the potential for future sales in the round. There are other quirks, like how “Epic” stock increase the star value and thus the overall quality of your lot. And there are considerations to take, such as an incentive to sell to members of one of three guilds in order to win a +1 guild token for later sales.  Then, there are also bonuses for having certain types of customers in your shop during the Review (the end-game scoring that occurs after five rounds).

I love all of this. What’s more, I love that this is a good old fashioned “money is how you win it” affair. And this means that buying a card off the display means investing points against future sales. Granted, the coins spent on cards are included in your overall score at the Review as are any investments you’ve made on special ability or bonus granting fixtures (such as the popular Aetheric Slushie Machine). But paying staff- that’s another story. There are only two Staff cards displayed each round, but you can always buy one off the top of the deck for four coins, as you can with the Stock and Fixtures decks. Staff usually has a really good special ability, like being able to view all of the Adventurers for the round and choose one to initiate a sale with, but you’ve got to pay these folks their salary every round or let them go. You don’t get your money back unless they actually do their job and do it well. But that’s on you, manager, to work out how to maximize their talents.

So Adventure Mart is 45 minutes to an hour of trying to ditch your junky one star Stock cards, trying to beat the other players to the better displayed cards, making decisions on which Fixtures to install or Staff to hire, and deciding when to flip the next Adventurer to start the auction. This is just right, but it also feels that the arc of the game isn’t quite dynamic enough. Although ideally your Stock deck’s overall quality and ability to make sales increases- making this feel something more like a tableau builder than a typical deck builder- there is not a very strong sense of development or progression. The adventurers are random, and it can mean that the last round is flush with low stakes customers, some of whom may steal money from you. There is an Event card drawn at the beginning of each round that may do things such as put extra demand icons on Adventurers, give bonus funds to players, or add other special rules. But even then, it’s kind of hit or miss how impactful they’ll be in the later rounds.

What this design really needed, I think, to get to the next level as it were might be a staged setup wherein the demands and payouts increase over the course of the game rather than leaving these to chance.  It’s somewhat deflating to play a game when the biggest, most spendy customers stroll in during the first round. Granted, you may not have the Stock to maximize their spending, but it can lead to situations where the more volatile and competitive sales happen earlier in the game when decks aren’t as well developed.

I’m also somewhat unsatisfied with the variety of cards. On one hand, I like the streamlining expressed in not having 100 different types of Stock cards. But on the other, I kind of want there to be 100 different types of Stock cards. The effects and benefits of them seem sort of repetitive and predictable, and there’s not really a combo-oriented mechanism to generate synergies between cards. I do like that there are some Stock cards that do things in different phases (like forcing Managers to lose their highest value card in a sale), but there’s maybe a little too much restraint here. As for the Fixtures and Staff, I feel like there isn’t enough variety- I’d almost like for every card in both of these decks to be completely unique. When it comes down to it, I suppose this is the classic “needs expansions” criticism lobbied at many new deckbuilders.

But, there again – the contained scope and range of cards keeps this game accessible and, despite the economic depth, kid-friendly. My son and daughter just love the game and it’s been on our table every night since Rory and the fine folks at Hub Games shipped me a review copy. It may also please those who have tired of the general deckbuilding concept as there’s more here than the churn of acquisitions, removals, and reshuffles with the auctions and economic focus. Fun, charming, approachable and with appreciable depth- this is a game worth at least four quality stars.