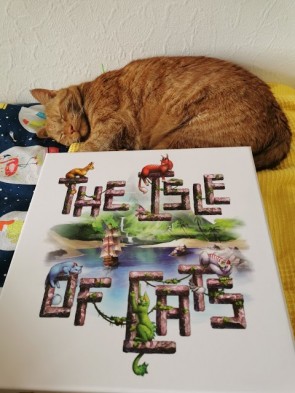 We take a look at The Isle of Cats, also known as What Frank West did Next..

Finding a game that appeals to the whole family seems to be a never ending quest of mine. There have been some successes, including Kingdomino and Sagrada, but for the most part I usually give up and get another LCG expansion because finding that elusive game that will appeal to adults and kids (who rather inconveniently are different age groups and genders) is not always easy.

When The Isle of Cats was announced as the next game from Frank West's The City of Games, I must admit I wasn't expecting this to be a contender for that hard-to-find game that appealed to my whole family. This was largely based on my experiences with The City of Kings, which is very much not that family game I sought. The theme did appeal though (we had 4 cats at one time, now we just have 1) and being a polyomino game it had potential but the icing on the cake were the family rules. As such, every observation is based on the family rules and not the solo or full game rules, so please bear that in mind.

The story goes that a fables island, home to a race of ancient cats, is under threat from the advancing armies of Vesh Darkhand. Your task is to race to the island in your boat, and get as many cats on board and away to safety before the island is destroyed. All the while outscoring your opponents of course. 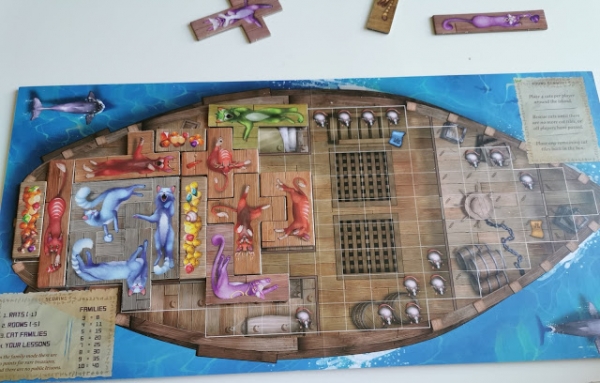 Each player gets a ship board, showing a nice illustration of a boat, with a unique configuration of treasure map and rat symbols. The flip-side of the board is used for more advanced rules. A grid overlays the boat representing the available spaces to place cats and treasure. Finally the boat is made up of 7 separate areas or rooms, all of these things coming into play when scoring or placing cats on the boat. More on these later.

Finally, each player is dealt 3 Family Cards at random and 2 are selected and kept secret from each opponent. These represent in-game goals which are scored at the end of the game. The game is then played out over a series of 5 rounds. Each round begins with 4 cats per player drawn at random and placed in a pool. Players take it in turn selecting a cat and placing it on their boat, with some placement rules applying. At the start of each new turn the 1st player moves to last spot, with every other player moving up a spot in the order.

On the surface the game seems pretty straight forward. Pick a cat and place it, rinse and repeat. There is some strategy in here as well though, with players trying to build "families" of cats to maximise their scoring at the end of the game. A family consists of 3 or more cats of the same colour which are adjacent to each other. Now, it's highly probable that one of your Family Cards may be "Have exactly 5 yellow cats on your boat", so you have to be mindful of this. You're also wanting to cover rat spaces as any exposed rats mean lost points at the end of the game (unless you have the Family Card that gains you points per rat showing), so there's a lot of variety with how you can approach each game. 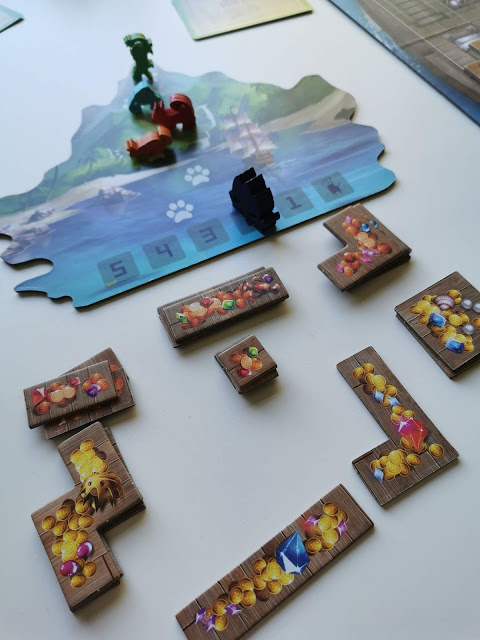 Now, as with all family games I've played, the player taking their turn before me invariably takes the cat tile/meeple/die/whatever it may be, that I needed to pull of a masterful piece of gameplay. Them taking this piece usually makes my house of cards fall apart as a consequence, and in almost every game of The Isle of Cats this has happened to me. Which is great really. It creates that to and fro between everyone, delighted that plans have been ruined or their own plan coming to fruition. Because of this it gives weight to every decision you make and the teasing and banter when selecting pieces is good fun.

On the flip side of that I've also fallen victim to far more nefarious schemes. Picture the scene, I'm poised on the edge of my seat, brow furrowed and chin clasped as I ponder the available cat tiles before me. I think that cross shaped green cat might do well just there, or maybe that step shaped yellow cat will fit snugly in that corner. Either way, this is the game-winning move right here. My hand reaches out and beside me I hear the sad little voice of my daughter, "Aw, I was wanting that one." My judgement gets the better of me and I opt for the wrong cat, so as not to disappoint that freckled little face. Minutes later she's lording it up over me having pipped me in the final scoring. Never again! The Isle of Cats - get emotionally blackmailed by your kids! 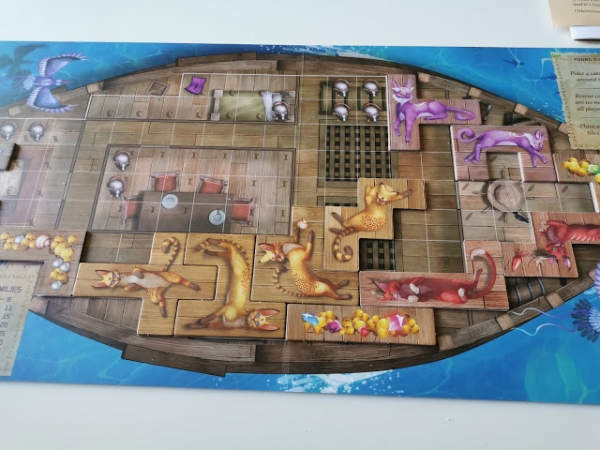 There are some other aspects of the game that I really liked. The treasure map areas on your boat are a really nice touch. They are on one of the five colours the cats come in. Lay a matching coloured cat tile atop the treasure map and you can select from the array of treasure and place it on your boat. The treasure is shaped a bit more Tetrisy (its a word - now!) and these come in handy for plugging gaps made by the more non-Tetrisy (still a word) shaped cats. This can come in handy of you have a Family card that required you cover every square on the perimeter of the boat, for example.

The Isle of Cats was a definite hit in my house. The simple gameplay together with the planning and strategy elements brought in by the polyomino tiles and the Family Cards made this game feel it was pitched perfectly for our family dynamic of two adults and two kids (both genders and different age groups). There was something there for everyone. The component quality is great, the art is lovely and the box lid even comes with instructions on where to place your own cat should you have one. Ours got the message anyway. The Family Rules sheet is also excellent and very easy to understand. I wouldn't hesitate to recommend this to any board gamers with kids.  I'll leave you with another picture of my cat, Poe. He had a tough day. 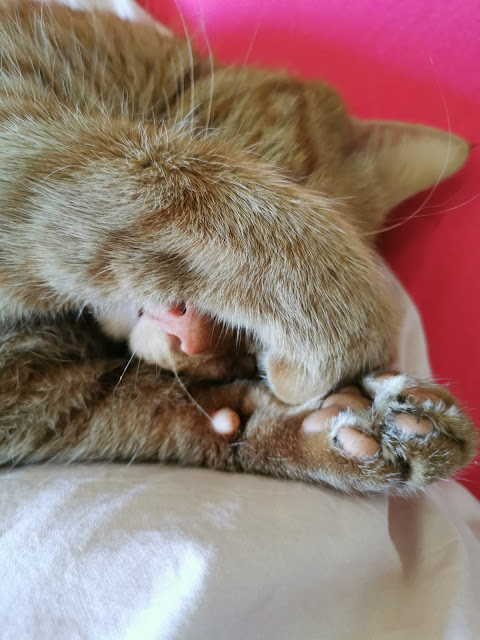 the_jake_1973 replied the topic: #312822 05 Aug 2020 19:40
This was an instant backed project for me. A game that was tailor made for my wife's enjoyment. Cats and efficient organization. I went in whole hog and was not disappointed. There is enough strategy for the adult side of the game and each ship is a different layout of rats so there is variety there as well. You have to have a good poker face so as not to focus on looking at one piece too long as you mentally calculate where it will fit and how it fits into the cards you drafted. Oh yeah, the card drafting, or how to stick your spouse with useless cards.

It may last overlong for some people and a timer is necessary for the AP prone person.
Read More...