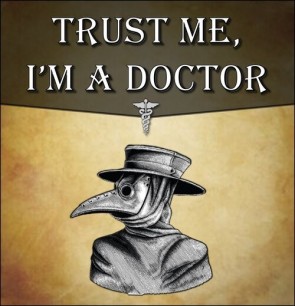 A learned treatise on the many and variegated applications of leeches as a restorative agent.

I knew the patient was uncommonly afflicted the moment they set foot inside my practice. Setting down my homunculi as I turned, I was confronted with the very physical manifestation of godlessness as it seemingly wrenched and twisted the young man’s features in an exquisite rictus of agony.

A patchwork assortment of painful and puckering pustules sat suppurating upon his clearly fevered brow as his shaky hands reached out, grasping for succour in the educated embrace of the learned medical professional. I knew then and there that my diagnosis would draw upon the most taxing research and diligent practice in formulating a remedy that both eased his suffering and strode to advance the cause of modern medicine. It was with confident strokes of the quill and the warm glow of certainty that I inked his prescription: COMPLICATED ARSE SURGERY. ~ from the diary of Dr. Sanguinus Catheter MD

‘Trust me I’m a Doctor’ the new small-box card game from Australian developers Half-Monster Games takes place in the golden age of black-beaked experimental medicine. That glorious era where alchemy, mysticism and good old-fashioned bone saws were free to ply their noble trade unfettered by the pithy intrusions of “Germ Theory” or “Anaesthetics” muddying the otherwise purest waters of Bloodletting, Leech Applications, Exorcism and… desiccated dogshit.

As simple as the universal truth that four competing humours hold sway over our mortal vessels, the game tasks 3 to 8 budding practitioners with the act of postulating and proposing the most efficacious remedies to a selection of maladies proffered by the flaking lips of the stricken masses, all whilst competing with the charlatan snake-oil salesmen that comprise the other players and their predilection for quackery and preposterous procedures.

The rules, much like the period knowledge of medicine, are remarkably scant. Enough to form the sinewy connective tissue of the experience, yet with a brevity that sees them condensed to the size of two playing cards. Two decks are shuffled. One depicting the myriad of debilitating ailments afflicting the unenlightened masses, and the other outlining the ingenious advances and insights of learned men that will aid them in its selection of unguents, ointments, rituals, and necessary perineal incisions. Players then alternate between embodying the diseased subjects of the day and the panel of invertebrate wielding interventionists that will proffer their selection of fixes and elixirs in a bid to gain their patronage.

It was with a true sense of pity and despondency in our hearts that we gazed upon the hysterical thrashings of the poor Lady Thistlebottom. Her jaundiced glare and spasmodic twitching bore all the hallmarks of excess bile gathering in the organs vitale, though one glance was enough to convince me that this doleful wretch was stricken with a particularly advanced case. As I closed my briefcase after a thorough examination and intense contemplation that drew deep upon all my professional faculties, I knew the answer was clear. With firm deliberation I announced my verdict of treatment: ONE BOUT OF COMPLICATED ARSE SURGERY. ~ from the correspondence of Professor Adolphus Hookworm III MD

Players will take turns selecting from a hand of three ailments. They will then be beguiled by the competing diagnoses and prescriptions offered by the remaining participants, each of whom will be drawing from a hand of six remedies, refreshed at the conclusion of each round. Players are encouraged to ham it up, bickering and casting aspersions upon the efficacy, suitability and morality of their opponent’s proposals, calling their qualifications into question and disabusing them of their archaic notions of medicinal practice, all in an attempt to win the trust of the prospective patient and have them acquiesce to your preferred notion of treatment.

Curative procedures are subdivided into the realms of either Alchemical Salves & Tinctures, Mysticism, Philosophy & Psychiatry or Anatomical Barber-Surgery. These three competing schools of medicine are denoted by a series of symbols upon each card and should one wish to provide suitable relief, one’s treatment must have a symbol that aligns with the infirmity in question.

Once the patient has described their symptoms in vivid detail and the panel of Doctors has in turn proffered their nostrum, decried the competence of their colleagues and performed their best PT Barnum pitch, the patient makes their selection based upon the least-worst option at hand. Having provided solace to their subject, the process then repeats until one of the Doctors has been successfully selected three times and they are crowned the Surgeon-General, a title they must be referred to with throughout the remainder of the day.

The subject was demonstrating a textbook case. Before me the pate of his head shone brightly as strand-by-strand his thinning barnet revealed the spherical tilt of his cranium beneath. Hair loss. A sure sign of impotency and a tell-tale indication of spiritual impurity manifesting itself in the deforestation of his manly locks. It was times like this I gave thanks to the hand of providence that had steered me towards this benign profession where my steady mortal hands could truly make a difference and redress the many blights that ailed the tormented. With a warm and confident baritone I summoned my assistant, exclaiming “Prepare my quarters, …for COMPLICATED ARSE SURGERY”. ~ from a monologue performed at the annual Symposium on Bloated Appendages by the esteemed Dr. Tarquin Fistula MD

With its paper-thin mechanics and modest sum of components, ‘Trust Me I’m a Doctor’ presents an exercise in improvisation, narrative play and gleeful schoolyard banter predicated entirely on a masterclass in theme. By this point in proceedings you probably know if this particular tainted specimen jar is for you and your colleagues.  The paltry monetary outlay it requires is a further therapeutic ostrich feather in its operating-gown cap, and should you find yourself amongst a crew in possession of a similarly suspect sense of fun then it’s a perfectly redoubtable way to fill an hour or so of your evening.

And if not? Well you’ve probably already predicted my prescription… 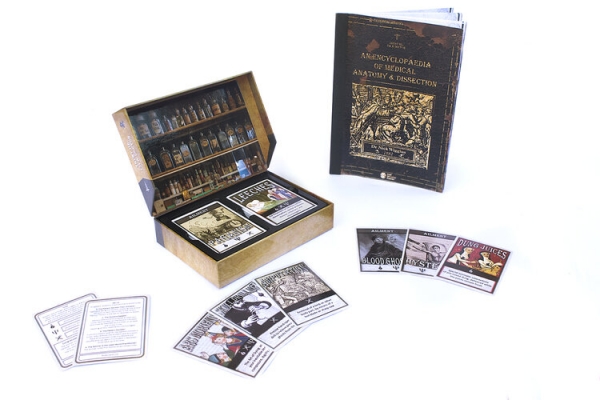 Get your mask on here.

ubarose wrote: I love the art.

Quick, apply this patent salve to the affected eyeballs whilst I fetch the red-hot ocular scoop.

Thank you for this marvellous review Doctor Andi! We’re very glad that COMPLICATED ARSE SURGERY is finally seeing its moment in the sun as a miracle cure for all afflictions. We wish you many happy patients and swiftly-acquitted malpractice lawsuits!

Thank you for this marvellous review Doctor Andi! We’re very glad that COMPLICATED ARSE SURGERY is finally seeing its moment in the sun as a miracle cure for all afflictions. We wish you many happy patients and swiftly-acquitted malpractice lawsuits!

It is with heavy heart I must concede that due praise must also be ascribed to the parade of orphans on which I was able to hone the specifics of this miracle procedure. Their loss (the act of painless ambulation) is truly society's gain.

OhBollox wrote: Complicated arse surgery is why we have the NHS in the UK.

Not for long if Boris has his way

mc replied the topic: #312588 29 Jul 2020 18:52
Andi, great read. I'm not sure I got the sense of how much room there is for creativity using the cards alone though. I know this is kind of not the point, but I'm curious none-the-less. Do you get some choices with those card selections that are truly better than others, or is it really all about how you sell it? I think the thing that is making me wonder about this is the fact that the cards have those symbols on there.

mc wrote: Andi, great read. I'm not sure I got the sense of how much room there is for creativity using the cards alone though. I know this is kind of not the point, but I'm curious none-the-less. Do you get some choices with those card selections that are truly better than others, or is it really all about how you sell it? I think the thing that is making me wonder about this is the fact that the cards have those symbols on there.

Honestly, the actual mechanical considerations are pretty slight and definitely take a back-seat to the fun of emergent banter so it will tend to shine or not based on the group you're playing it with. My friends and I are all pretty fucked so it was a great fit.

There are definitely numerous scenarios where certain cures are a better match for the corresponding ailments (i.e 'excess blood' and 'bloodletting' etc) but it's way more fun even when holding such a hand to convince the patient that they'd be better served by having hot snails jammed up their urethra or something.

...oh what might have been. You could say the same for Australia, the US, Brazil etc. Representative Democracy is teetering like an ether huffing practitioner at the tail end of a 4 day bender right now it seems...
Read More...