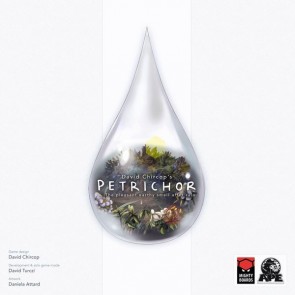 “Petrichor,” says my daughter after seeing the austere beauty of the white box with a shining raindrop. “That means the smell of rain”. I wonder if she’s read it straight off the box since the definition is there in small print. But she says she’s read it in one of those lists of obscure words that no-one uses, and should. It’s enough to inspire her to play, for which I’m grateful.

We pop out the fold-up clouds while I explain how the game works. Most of it is playing cards from your hand to affect clouds on the tile-based board. Frost cards let you add a cloud with your colour raindrop to an empty tile, for example. Other cards increase your drops in existing clouds, blow a cloud to an adjacent tile and make it rain, sending drops to the tile beneath.

Each card also lets you vote on the weather for the round, which is a souped-up version of the matching card. The aim is to make plants on the tiles grow by getting enough water, then score the tile according to the number of drops on it. It’s not a complex game. But as we start to push vapour around the empty board, it becomes clear there’s a disconnect between rules and effects.

You know how in some semi-abstract games you’re not sure how to work the levers to get points out? Like that, except there’s a second gap: you have to make rain clouds and then make it rain before you can even get your raindrops on the board. It’s a classic area majority game distorted with a double twist.

There are further wrinkles. Daughter starts out on a cotton tile which scores highest for the player with most raindrops, and a paltry one point for second place. I start raining on grass tiles which work the same except players after first place only lose one point. As votes begin to pile up for sun weather this round, I take a chance and start piling water on the coffee tile. This is worth big points for the majority player, but only if it gets a round of sun weather after it’s sprouted. We add and remove beads from the clouds and tiles we’re targeting and wonder where the game is.

Often, in a rulebook, the precise choice of words is vital. In the Petrichor rules, it says that when a cloud rains, you “pour” the beads onto the tile beneath. When two clouds meet on the tile-based board you “pour” beads from one into the other, creating a single cloud.  And it’s important that you do, even if it risks the beads going everywhere: the sight and sound bring the rain to life. Cardboard and glass, conjuring rain like a boxed shaman.

Partway through pouring beads onto a grass tile, the game clicks into focus. This is a merged cloud that I’m trying to use to overturn her majority on the tile beneath. But there are more of her beads in the cloud than mine, so it’s a doomed proposition. Next door, however, there’s a potato tile. Potatoes score more for the player in second place than first. So I blow the cloud there and watch her face as she realises what’s going on. This isn’t just area majority with a delay: it's using the delay to scupper your opponent’s plans.

Now, it’s game on. The rules allow you to play a pair of cards to take any action which my daughter makes heavy use of, blowing that card back over the grass field. I sit, smug with cards until she catches me on another wrinkle. By her playing out, I only get one further action to influence events so my card excess is useless. But I can manage this one step, two steps removed planning better than she can: especially with the weather. My coffee gets bathed in sunlight and I reap the points to take a comfortable win. 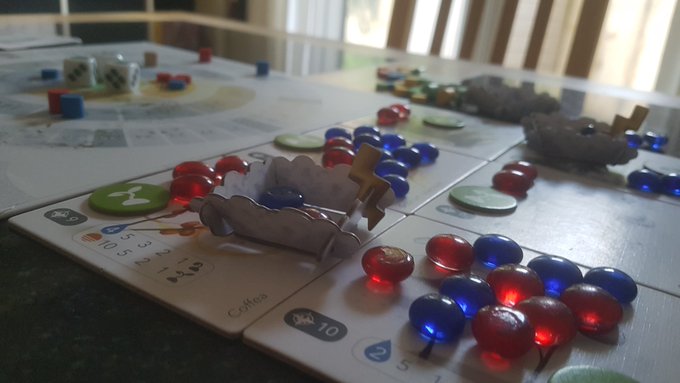 We play again a few days later on a perfect evening. The door is open with the sun shining on the wet garden: the smell of Petrichor drifts in and the beads glow like dew in the dawn. It’s Kate Bush’s birthday and I can’t resist the chance to queue up Cloudbusting on the stereo. We have a third player this time and a square board. With three another tile type, Corn, becomes interesting as it scores on player count rather than drop majority. Seasonal wind weather becomes a new tool in the armoury as it allows a player to blow a landed drop - anyone’s landed drop - from one tile to another. Competition over the possible twelve points in represents becomes intense.

Like the mysterious father figure in the song I sit back, nefarious schemes massing in my head like cumulus. But as they begin to blossom, there's a strange lack of satisfaction. There's definite skill here, definite interaction but the layers of cloud make it feel fluffy and remote. In one way, it's quite fun to play a mean game with the family without them realising. But for the most, the multi-layered strategy that makes the game pushes you away from the other players and the theme.

The rain gods have showered upon me three of the game’s expansions, so we check them out. The first, Petrichor: Flowers, looks dull and appears to mostly add a fifth player to the game. The second, Petrichor: Honeybee has a cute bee piece and looks awesome. To our surprise, the opposite proves true. Flowers has some new tiles, including the Dandelion which spreads and sabotages other player’s scoring tiles with weeds. We have great fun wreaking havoc with it while cursing all the damn things sprouting in our garden. It also features variable player powers: all simple to add and enjoyable though not essential.

Bees add pollen and honey to the game, along with tiles that use them. These needs pollinating first via the bee, which you can move in place of using paired cards. It does add quite a bit of new strategy to the game and a “tragedy of the commons” effect. Everyone wants plants pollinated, but no-one wants to waste actions to be first to do it. But in practice, it feels too cumbersome for the limited payoff, with new resources to track and rules to learn.

The third expansion, Petrichor: Cows, is new: there’s a Kickstarter running right now for it and a deluxe version of the base game. But when we try out the bovine beauties, it proves a similar story to the bees. Cows contribute methane and fertilizer to the game. The latter is worth bonus points if it’s on your tile. The former sits in the clouds and influences the climate in a whole new phase, interacting with some of the new plant tiles in the box. The amusement value of watching the cows pat everywhere contrasts with the haunting reminder of global warming. But the reference is glib, passing, and reversible via card play. It feels a missed chance to make an important point.

That said, playing Petrichor makes me feel something other than the pleasure of play, and that's rare. It makes me feel a spring afternoon in the woods, sheltering in a tent during a downpour. Picking up the pieces I can almost feel the dirt beneath my fingernails. It smells not only of rain but of a place where tough, callous games don't have to mean warfare. Any magician can pull a rabbit out of a hat, but it takes a greater designer to pull a cloud out of a box.

You can pledge for Petrichor: Cows and the deluxe edition of the base game with flying plastic clouds on Kickstarter.

August 09, 2020
Rating
3.0
Petrichor
An unusual and effective abstract on every level, but, while challenging and clever, it's multi-layered approach to affecting the board leaves the players too distant from the game.
MT
Matt Thrower #1 Reviewer 286 reviews

barrowdown replied the topic: #312964 10 Aug 2020 18:33
The oddest part for us was the disconnect between the games aesthetic/theme and the absolutely vicious gameplay underneath. I thought it was well-designed, just was expecting a more laid back game about rain.

If you'll excuse me I'm off to dream about Wilhelm Reich, men in fedoras and strange sexual tension with Donald Sutherland.

We-reNotWizards replied the topic: #312973 11 Aug 2020 04:36
My only issue with the game, and it's probably only me reading the rules wrong, seemed to be the inability to be able to add your own rain to any clouds that you didn't have a droplet in already. In the games I played, my son created as many clouds as possible, thus making it almost impossible for me to gain any ground back, unless it was through a wind action, by joining with a could I had managed to make. It was however one of those games where the theme fitted precisely with the mechanics, and they were having so much fun, that we ended up both having fun.
Read More...