Into the Trees - The Weirding Woods of the Storymaster's Tales 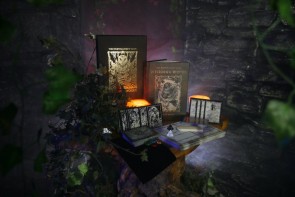 For the young and young at heart- a throwback to more Talismanic times.

Weekends at my grandparent’s house were always coloured by the contents of their bookshelf. Amongst the dauntingly fat spines of Leon Uris and Robert Ludlum, the alluring cover art and typography of CS Lewis and the blood and horns pulp of Henry Treece sat the worn hardback spine of a 1960’s omnibus of fairy tales by the Brothers Grimm. Tucked up of an evening with blankets as my barrier, it would keep me wide eyed until the small hours as each rattle of the tree branch upon the windowpane above my head took on increasingly sinister aspects as my imagination bloomed.

It’s awesome what they let kids read back in the day. Unsanitised, suffused with myth and legend, haunting grotesquery, and as grim as their namesake, these timeless terrors firmly entrenched the first set of fantastical archetypes in my mind. Touchstones that would later be joined by parades of Shoggoths, Cimmerians, Rust Monsters and Shapeshifters as I followed this particular breadcrumb trailer deeper into the woods.

Whilst as an adult these formative stories have been somewhat robbed of their power to elicit a shiver, they still sit straddling a firmament somewhere deep within me, and through the world weary eyes of experience, now come replete with more universal symbolism and archetypal cachet then I could ever comprehend on those first chilly nights spent with the spine digging into my thighs as I flipped the pages. 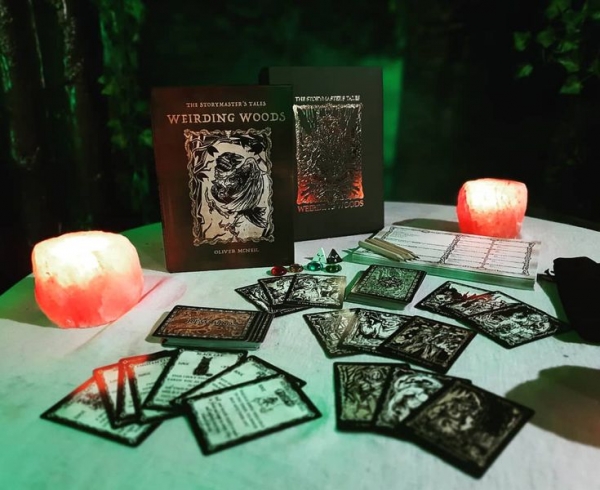 Weirding Woods, the debut entry in the Storymaster’s Tales series by Grim Games and the brainchild of one Olly McNeill was almost certainly spawned of a similar childhood dalliance with these twin German folklorists and is a love letter of sorts, not only to that childhood touchstone, but another fondly recalled gateway that too remains stoically in print to this day.  Whisper its name and be transported to the peeling wallpaper bedrooms of yore where you were no longer in a suburban fibro box or on a shitty caravan holiday- you were navigating the crags en-route to the plane of peril.

It was the art that first caught my eye. In a similar vein to Themeborne’s Escape the Dark Castle it sat flinging come-hither glances with its bold monochrome stylings. Confident and evocative linework leaped out from a selection of cards that promised to tell a different story with each shuffle of the deck, and upon each card, familiar yet transformed were the woodsmen, gnomes, wolfen maws and withered crones of that universal shared space we flee to when the world at large twists a different kind of grim.

Lavishly packaged in a gold foil embossed black box, lifting the lid reveals the primary decks of encounters and rewards, a beautiful perfect-bound softback story-book and a plush velvet pouch stuffed with dice, pencils and four of the majister ludi’s opaque glass beads. Dig a little further and you’ll unearth a sheet of standees and a pad of character pads that will be utterly familiar to anyone who ever cracked the lime green spine of a 1980’s gamebook. As you cast an eye over its contents the pieces fall immediately, almost imperceptibly into place and you’ll be embalmed with the warm glow of nostalgia, recollection and childlike glee that accompanies the act of play and the atavistic tactile joy of handling the lovingly rendered pieces.

You’ll be playing in minutes too, as the barrier to entry here will barely scrape your knees and requires no vaulting to land amidst its wooded glade. Select a character from the selection of Rogues, Wizards, Soldiers and Princes on offer, select a quest from the stable of curses, legacies and prophecies and draw your first card. 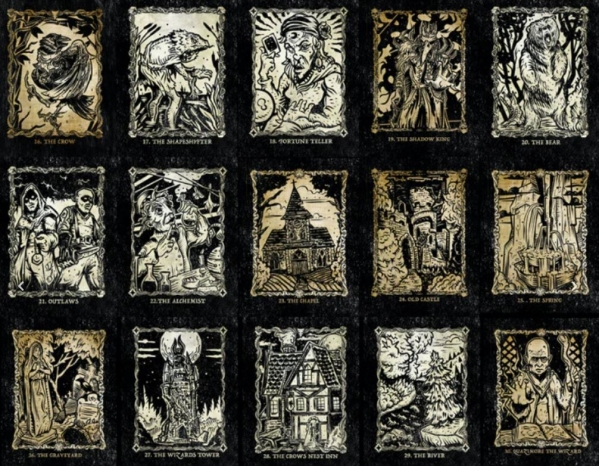 See into the Trees

Each turn, you and up to four other adventurers will select a card from the deck and place it in orthogonal proximity to another, as piece by piece you lay out the shifting geography that makes up the tangled weirding woodland of the game’s namesake. With each card you’ll be directed to a page in the storybook where you’ll be greeted with a beautiful full-page rendition of the card art and a snippet of flavour text accompanied by a series of choices ala’ choose-your-own adventure. You may then be rewarded for your prescience, scalded for your folly, or prompted to test your fate by rolling on a table (remember when you visited the tavern in Talisman and got in a drunken fight with a farmer? You will.)

Lurking in each location are a range of foes, friends and familiars to help or hinder you. Will O’ the Wisps, Shadow-Kings, the crone Baba Yaga, Great Bears, Dragons and Outlaws roam the woods between standing stones, wizard’s towers, crumbling castles and silted swamps. Should swords be crossed you’ll be rolling a single die (either d4 or d6 depending on how swingy you like it) and adding the total to either your fighting skill or magic craft stats. Do the same for your opponent and whomever comes off second best loses a solitary point of health. It is a mechanic frozen in amber circa 1983 and whilst it lacks the inventiveness of say EtDC’s symbol matching system, it nonetheless stays true to the game’s intent in capturing the spirit of its childhood antecedents.

Wariness should be your watchword here though, for combat in this game can be lethal. As you make your way around the evolving ‘map’, seeking to unearth items, develop your skills and solve the numerous quests and sub-quests that will avail you, the art of fisticuffs is usually a peril of last resort. My first encounter with a band of brigands left me wheezing and bloodied on the precipice of expiration only a handful of turns into proceedings. It was a valuable lesson in discretion, and thankfully in most instances, the options to circumvent these encounters are plentiful. They then sit leering upon the map, adding a layer of strategic depth as you are forced to plot a course between thorns, making the most of each turn as the game’s in-built timer ticks down, gifting a sense of urgency to proceedings as the game rallies to its climax. 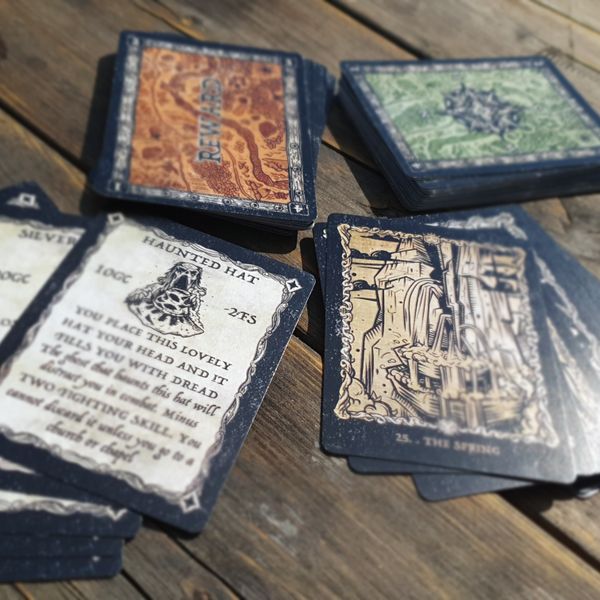 Lost in a Forest

For such a meagre set of mechanisms however, much like its talismanic cousin- this thing can run long. Success depends entirely on drawing the required location cards from the deck, and even should they appear early- it is unlikely you’ll yet be in any state to concede to their demands.

My first two-player run-through saw around two and half hours flit by before we were able to deposit the severed heads of the haunting hags back at the inn and bring solace to the children of the woods, but this timeframe was probably padded by the ancillary stories and banter we affixed to each encounter. It is in embracing a similar approach you’ll find the game best shines, however. The writing on offer is somewhat threadbare by design, leaving your imagination to gild the rims of each scenario. Its brevity prevents things from getting bogged down on repeat playthroughs and is only truly there to act as a prompt for you to dig deep into those recessed sacred spaces where these archetypes still dwell. Or if you’re a child- encode them forever, just as we did.

And it’s the young, along with the young at heart that will ultimately be best served here. If I was a breeder then this would surely be one of the first rungs on the ladder I presented to my sprogs. It’s simple enough to be easily grasped, it acts as a fantastic introduction to both games, interactive storytelling and nascent role-play, and has just enough sinister bite to provide the chills that linger, capturing a fertile imagination and (hopefully) seeding a curiosity that will lead them down more labyrinthine passages in years to come.  As a family game it is an exemplar, and as a fun throwback that encapsulates the old school pillars of Talisman, Fighting Fantasy and Fairy Tale you could certainly do far worse.

Fervently embraced by a budding community that have rallied around the game, its success has in quick succession spawned both an expansion ‘Deeper into the Woods’, a sequel ‘Dracodeep Dungeon’ as well as a forthcoming spin-off ‘Hotel Lovecraft’ that perhaps aims to capture an older crowd and a different set of primary signposts.

With its wildly accomplished art, beautiful presentation and classy box binding it looks fantastic on a bookshelf too, perhaps sat sidling up close to those same stories of old that started its very journey. 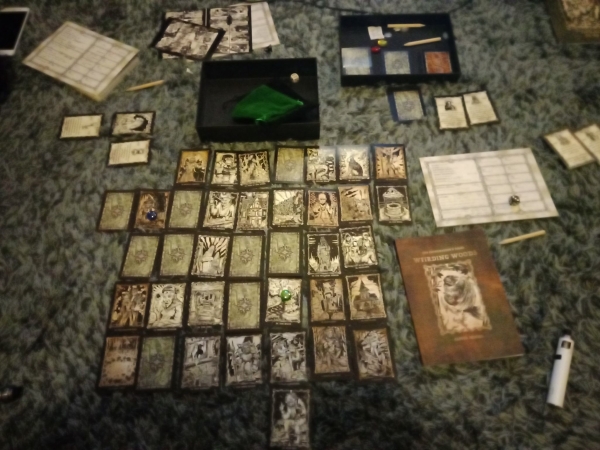