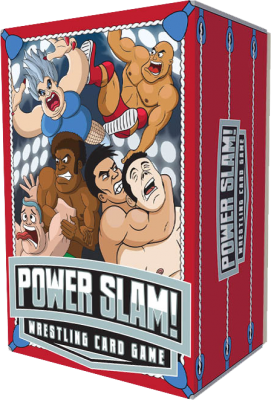 Game Name
Power Slam!
Designer
Players
2 - 4
There Will Be Games

There is something uniquely star spangled about the overtly homoerotic, oiled-up displays of gymnastic machismo and athletic theatrics wrapped in soap opera stylings that comprises the pituitary tumour on the world of entertainment that is the WWE.

Divorced from the tether that binds other ‘sports’ to reality, it soars from the top rope with spandex clad abandon, showering flashpot sparks upon kayfabe-laced heels and faces as a comforting analogue for good and evil. Stark black and white duality, clumsy metaphors for foreign policy and redemptive arcs of betrayal, retribution and justice locked in a sweaty embrace with strange notions of honour and duty, rhinestones and thumb tacks.

No other spectacle quite compares. Our human thirst for drama hoisted to the ladder-match apex of its logical conclusion.  The perfect inspiration for games then.

And from the shores of Australia of all places, striding into the ring with its intro music set to palm-muted stun, swaggers the latest contender for the title belt- Power Slam!

The debut game by a trio of Sydney comedians, I was gifted a prototype version of this successfully crowdfunded chokeslam simulator and duly laced up my tassled trousers for a three-count bout.

A lightweight competitive card driven experience, Power Slam tasks 2-4 players with besting their opponents in a strategic set-collection and take-that affair as an approximation of the bone-shaking fisticuffs, tendon snapping grapples and high flying smackdowns that unfurl within the rarefied air of the hallowed squared circle.  Smell the lurid greasepaint, baste beneath the heat of the lights, and marvel at the shy and shrivelled gonads.

Drawing from a generous central deck, each player will be attempting to initiate a series of moves by assigning cards to a variety of hands divided into Strikes, Throws, Grapples and that glorious coup de grace- the signature finishing move.  Depending on the complexity, damage potential and utility of the manoeuvres  in question, this may involve one or more cards that can be built into punishing combos at the hands of a skilled player, dictating the momentum of the bout and adding a layer of strategy and tension as players pray the central deck gifts them with the missing piece to crown their carefully constructed choreography.

Once the potential moves for each round have been assigned, players must allocate further activation cards, tailored for each suite to commence the bringing of pain in an immensely satisfying crescendo. Counter cards can turn the tables however, and in turn can be countered themselves- a neat simulation of the back-and-forth momentum of a real wrestling match as the combatant’s struggle to gain purchase on the slippery biceps of their opponent.

It can lead to some truly memorable moments too. In one of our bouts, after a series of mounting strikes my opponent gleefully unleashed their theatrical finishing move upon me, only to have it countered as I in turn twisted to deploy the same move successfully on him, leading to a thrilling three count and emergent recreation of the famous ‘Montreal Screwjob’ that still haunts Brett Hart. This sensation is further enhanced by the Grapple mechanic where cards can be stacked to combo holds into one another, from arm lock to sleeper hold and beyond, delivering further damage in each subsequent round until countered or topped with a spine shattering pile-driver.

That is not Fair to Flair

The element of luck lurks ever-present as the deck spits out your opportunities for the round, but a real amount of skill and strategy is required in order to marshal the forces of fortune with a well-trained eye for the main chance. Do you come out swinging with a flurry of blows, or bide your time, crafting the perfect balletic blast that will decimate your opponent in one fell swoop? Do you counter your opponents throw or save your counter for the more destructive assaults he is surely constructing? Do you discard that special activation in the hope of completing your grapple combo, or hang onto it, hoping that the next round will deal you the flying triple blitzkrieg you need?

These decisions are made at a rapid clip as the game barrels along in an amphetamine blur. Matches can last anywhere from two to twenty minutes, with a cool risk/reward pinning mechanic that sees shortened odds gifted for the more bruises you inflict before going to the mat.  Never outstaying its welcome, it condenses a number of meaningful decisions and a generous fistful of surprises into each run-through. And as you stumble to your feet dazed to discover your manager has absconded with your girlfriend and your title shot has been stolen, you’ll be keen for a rematch, re-entering the fray in seconds with a simple shuffle that pleases the anabolic gods.

Although my prototype copy of the game was incomplete and subject to change, the art and design successfully straddles that essential space between being attractive and functional.  The cartoonish depictions of the combatants and their arsenal of attacks both charming and utilitarian, the gratifying greens and leering reds of the pin deck both simple and satisfying to flip.

Although a complete experience, one cannot help but wish that the creators had gone further in embracing the wild theatrics of its inspiration by including the likes of cheeky chair shots, referee interference, ladders, cages, barbed wire and madness- but I guess that’s what expansions are for, and even in their absence the game manages to conjure an authentic spirit of wrasslin’ that is all the better for it’s participants willingness to embrace their roles.

Put simply-one of the best elements of the game is the table talk trash that emerges as players roleplay their rippling avatars, complete with stage names, entrance music and mounting grudges.  Our first evening Pay Per View featured the long awaited clash between the Teutonic Terror ‘Das Boot’ and his masked high-flying nemesis 'Raoul Fiesta', who in the finest tradition of reductive racial stereotypes, entered the ring to a bludgeoning nu-metal rendition of ‘Little Spanish Flea’.  It’s even better if you can rope in a third player to act as an announcer complete with a collection of homespun Mean Gene-isms to narrate the flow of battle.

Right in the Breadbasket

With its tiny footprint, brief playing time and a retail cost to match- Power Slam! is a fantastic distillation of what makes small box gaming great, and yet it also manages to occasionally punch above its weight to create truly memorable moments and a deeply addictive ‘one more go’ factor that will see you cackling long into the evening as you deliver impassioned promos to camera, and lust for the snug embrace of the title belt lashed to your waist.

Slam into the turnbuckle here.