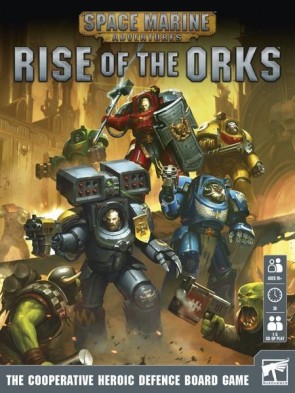 Like every Games Workshop board game, Rise of the Orks starts with assembling miniatures. There are five in this box, chunky Space Marine Terminators in five different lurid colours. They’re claimed as push-fit but I glue them anyway and a good job too, as the filthy yellow Brother Etrus has two joints that’d never stick otherwise. Trimming and pushing is a satisfying distraction and seeing the detailed figures pop to life is better. All five have helmet and non-helmet options and I can’t decide, so my battle brothers go into their first engagement literally headless.

Their task is to co-operatively defend six shield generators on a hex-spaced board from a rampaging horde of AI-driven Ork counters. I first set this up as “easy” with a pitiful five tokens arriving each turn against my five marines. Given most of the marines have multiple ranged attacks and the Orks have one melee attack, this seems far too easy. So I upgrade to “warrior” before my first turn, adding another two counters to the board. Each is placed on one of six entry points by the random roll of a dice.

At first, I treat this as a dice-based fire and forget exercise. The marines have various weapons from close-combat only, through template shapes, to the multi-shot assault cannon. The Orks come in various flavours depending on the difficulty level which is a bit of a pain to set up. When I attack, I have to roll equal or over the toughness value on the counter which my initial salvos do with gusto. Easy, I think to myself.

However, you may have spotted a lot quicker than I did that there are six entry points and six reactors to defend but only five marines. Within a couple of waves, Orks are boiling onto the board via the sector I can’t cover. Terminators move two hexes per turn, which is not fast. And it only takes a couple of bad dice rolls for my heavy flamer piece to be in serious trouble, swarmed by the enemy. His attack hits any counters in a straight line, so it’s easy for him to get blindsided. It’s not long before I’m down a reactor and a marine knockdown, both of which are losing conditions if they reach zero.

Orks move toward their closest undamaged reactor but will stop and attack if they’re next to a marine. It takes a few checks of the rules to work out but there’s nothing to say that, where there’s a choice, I can’t move them to my advantage. So I start to be more careful, telegraphing where Orks are going to move and trying to block routes to reactors. Plus, I try to get them in a straight line for that flamer to burn. At first, this pays dividends and the game becomes one of balancing reactor damage versus marine damage. Once the last wave of Ork counters hits the board I’m in good shape and I figure it’ll be an easy mop-up operation.

Turns out I relaxed too soon. 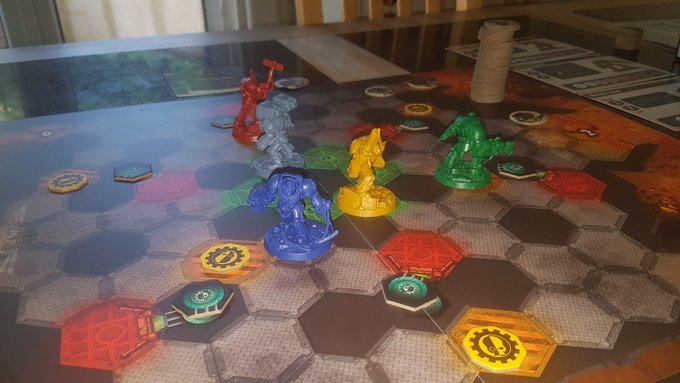 Counters on the board are still primed for destruction even when they’re the last of their kind. A few bad dice rolls and worse decisions and they’re wreaking havoc. I survive but only by the skin of my teeth, with both lose conditions on their last value before the drop. At the end of the rulebook, there’s a wonderful narrative scoring table where you get a paragraph of text for each condition. Turns out my forces fought valiantly, despite awful casualties, but there was enough shield damage for the Orks to slaughter half a city before they were driven off. It’s a neat touch that really ups the story value of Rise of the Orks and makes me want to try again, do better.

So next evening, that’s what I do. After all, it did only take 30 minutes.

My squad are now armed with a secret weapon to defeat the aliens: heads. Thus enabled they take their stations against a new wave at the same difficulty. This time, I track where the Ork counters will end up on their movement before selecting targets. This time, I take note of the abilities of each marine and try to use them to the full. Brother Sergeant Angelus looks to be notable for his three melee-attack storm hammer. But his storm shield is more useful, as it restricts him to a single point of damage from any attack. So he becomes the blocker, standing fast to stop the Ork accessing vital routes across the board. 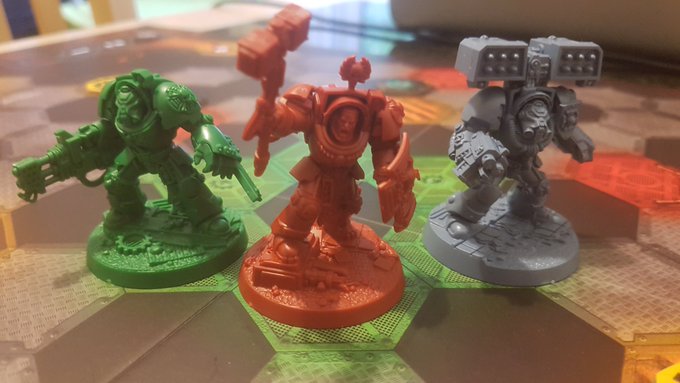 It helps that the Emperor of Mankind has blessed my dice rolls, too. The only real point of worry comes when a single corner of the board pours forth an unending stream of foes. But Brother Stormheart with his area attack rocket launcher decimates them in a flurry of lucky rolls, each punctuated by raucous cheering. As the thunder of gunfire and screams of the dying fall silent, I’ve lost only a single shield generator. The Orks have been utterly vanquished, according to the score table, and the void shields protecting the city barely flickered. A near-perfect victory. And in winning it, I’ve proved there’s a surprising amount of meat on this kid-friendly game.

Since the game is so fast and the conclusion so satisfying, there’s time to up the difficulty to Veteran. This adds eight counters per turn including Meganobz with a terrifying five toughness. To beat these counters reliably, I need better kit. There are also six spaces on the board where you can pick this up in the form of cards. End your turn in one and you get to draw two cards from the deck and keep one. They do things like give you extra actions, allow you to move Ork counters around and, crucially, give you attack bonuses. Having a whole deck when you’ll get at most six per game seems wasteful overkill but I still need them against those Meganobz.

Playing at this level feels a perfect challenge. I shuffle my terminators to cover the corners like a pro, trying to anticipate weak spots. In a quiet moment, I grab a card: most of those spaces are out of the main lines of movement. In the choice, I always pick shooting bonuses if I can. So when the Meganobz appear, I’m well prepared. The first I block with Brother-Sergeant Angelus who can soak up his damage until an attack connects. The second goes down with a dead shot from a card. Then the final three appear on the final wave. 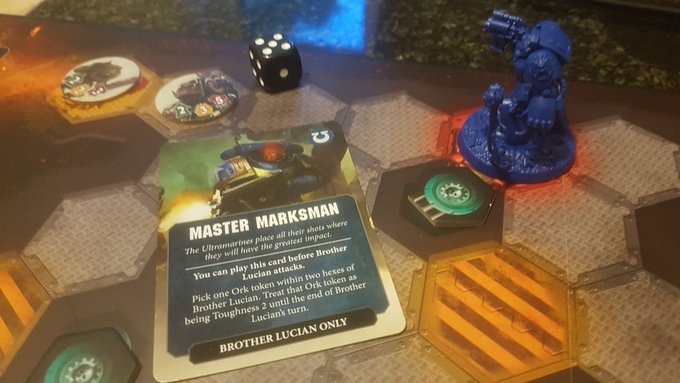 Again, I’d been coasting up until this point. But this time I’m much better prepared to concentrate and close down threats at the game end. It’s still squeaky bum time, though. I have to lose a marine knockdown to one incursion, sending another other to mop up the damage. For another group, I use a card to send them back to starting hexes of my choice. In the final turn I realise that if I back one marine out of a generator hex, the Ork will destroy that rather than attacking the marine which will just mean a lower score rather than an instant loss. Proof, if any more were needed, that there are important decisions to be made here alongside the thunder of the dice.

When the smoke clears, it’s a reasonable victory paragraph: bloodied marines, a stain on their chapter’s honour but city saved nevertheless. The lure of the text means you can walk an itchy line between being satisfied with a win and wanting to do better. I’m not tempted by the final difficulty level with adds Orks with special powers: I can’t be bothered with the faff, and it feels likely to be dice-heavy. Rise of the Orks works best as a fast, streamlined game. It’s been designed for kids, but for us adults, there’s nothing wrong with spending game nights reliving your lead-flavoured youth again.

August 30, 2020
Rating
3.0
Rise of the Orks
A fun, satisfying and great-looking co-operative defence game which is brilliant for kids but may lack replay value for adults.
MT
Matt Thrower #1 Reviewer 286 reviews

Jackwraith replied the topic: #313622 31 Aug 2020 09:58
Excellent. As you say, just the description makes me pine a bit for the my 40K glory days. But those days are the past for a reason, so I think I'll stick with reading your flavorful reviews.