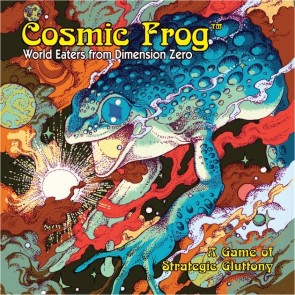 Jim Felli returns with his best and weirdest game yet.

What do you want to imagine yourself doing when you play a game? Do you want to work toward impressing the burgomeister with your tilework or to become the colonist deemed the most successful at subjugating native people and stealing their things? Do you fancy yourself a hero, stalking through dungeons in search of loot, or do you want to once again re-enact the fucking Battle of Bulge for the gazillionth time to see what would happen if some tanks turned left instead of right?

Cosmic Frog, the latest game from maverick designer Jim Felli, hears your feeble fantasies and declares them tepid, weak, and utterly boring. Why would your ambitions be so low when you can take on the role of a two-mile tall immortal frog-god, harvesting lands from a primordial, extradimensional realm. Why limit the potential of the games medium to Heroquest clones and old white man history lessons when you can play a game where you can punish another player for raiding your vault, where you store all of this land you’ve vomited up from your massive gullet, by punching them into six other dimensions.

This is a stunning design from a man who has quite frankly done nothing but stunning designs since he emerged from the mists a few years back with Shadows of Malice. His imprint, Devious Weasel, has become a brand for idiosyncratic and unique games that aren’t crowdfunded and exist almost completely within their own sphere of influences and antecedents. I can’t talk about Cosmic Frog in empty bullshit board game content creator terms like “if you liked Game X, you will love Cosmic Frog!” because there isn’t anything I could even compare it to. For those of us still around from gaming in the 1980s and 1990s, Jim’s designs are like those weird, sometimes wonderful one-off games that would pop up in the game shop from tiny publishers.

What makes this game special isn’t just the gonzo concept, the solid design (in fact, Jim’s best and most concise to date) or even the incredible Kirby-esque psychedelic illustrations that are this year’s finest example of artwork in games, full stop. It is that sense of being offered something completely fresh, original, and unique to do at the game table. Oh sure, there are some elementary components of game syntax and familiar mechanisms on display and it’s not like this game is completely rewriting the very concept of gameplay. But the full package is something that is best described simply as “other”.

That is a rare and in my estimation priceless quality in game designs these days, when all you’ve got to do to be a game designer is to cobble together 3-4 different mechanisms from whatever the most successful Kickstarters were over the past couple of years or to just capitulate to the easy-way-out of crapping out Worker Placement Game #XXX or Special Ability Player Factions Area Control Game #YYY into the sewage pipes of the crowdfunding process. This is a true auteur title, self-published, and the actions and ideas it expresses simply outstrip the imaginations of most folks working in games today.

Fundamentally, the game is really kind of a skirmish. There’s lots of moving, fighting, dice-rolling, and so forth. But it happens on a Shard floating in the Aether, and with the titular Cosmic Frogs (called the Rayna in a bit of mindbending, folktale-like lore) trying to gobble up the land before the Shard is destroyed by the Splinters of Aeth. Maybe there’s some Hey, That’s My Fish in there? But in that game, you didn’t have to worry about your penguin slowing down because your gullet was full of fish. In this game, whatever is in your gullet is a prime concern.

The familiar trope of special powers that make your frog better at fighting or raiding or doing insane things is also present. But those powers are never fixed, and they change throughout the course of the game when an Aether Flux card shows up in the turn order. There’s also an economy – “Oomph”, which is spent to power up actions. That’s right, “Oomph”. Represented by acrylic crystals. Why not?

It all winds up in this utterly bizarre three dimensional scoring scheme where your relative success is based on which types of lands you’ve successfully barfed into your vault and how you’ve arranged them once you’ve got the place how you like it. There are thick and thin (highland and lowland) land tiles, and if you make a Siphon (or, as I prefer, a sandwich) of corresponding high and low land tiles, you refresh some of that Oomph every turn. But if, ladies and gentlemen you are floating in space, your vault is vulnerable and can be raided by your opponents. This is a direct conflict game- no passive-aggressive exercise in watching each other follow the rules and then seeing who followed the rules most efficiently.

Delightful touches abound. If your frog eats too much land, the excess tile is, per the rules, destroyed by the nuclear inferno in your frog’s belly. My kids were pretty sure that was a complicated euphemism for “pooping it out”. Punch a frog with a full gullet and they’ll cough up a land tile that you can steal. One of the ability cards allows a frog to eat the “Barrens” tiles, usually worthless, and spit them out at the Shard and wreak havoc. There’s a lot to do with the frogs’ digestive systems here.

It’s all really quite easy to play, after a game or two of getting to grips with the game’s peculiar tone, non-standard terms, and way of presenting itself.  I’ve been able to play with my two kids (ages 10 and 8) and they have thoroughly enjoyed it. I’d hesitate to call it “accessible” because it is still pretty wild and wooly, and that’s without adding some of the variant rules which add a little more detail to the proceedings.

Definitely one of the top games of 2020 – but by way of disclaimer Jim Felli has been a contributor to TWBG, I playtested an earlier version of the game (my name is in the rulebook), I offered some thoughts on it during development and I’ve Internet “known” Jim for years and have kept contact with him. But as always, we do not accept payment for our reviews. So take all of that for whatever it means to you in context of this endorsement.

Andi Lennon replied the topic: #313761 04 Sep 2020 01:10
Dude, I pre-ordered this as soon as I saw the artwork on the banner ad hahaha. Hate to say it-bit it's something Shadows of Malice could have used. If this scratches half as hard as you say I'll probably grab Zimby Mojo and complete my Felli Trilogy too.

Andi Lennon wrote: Dude, I pre-ordered this as soon as I saw the artwork on the banner ad hahaha. Hate to say it-bit it's something Shadows of Malice could have used. If this scratches half as hard as you say I'll probably grab Zimby Mojo and complete my Felli Trilogy too.

He actually has 5 games. Bemused and Duhr: the Lesser Houses are similar. Bemused is slightly simpler but I prefer Duhr.

Gary Sax replied the topic: #313769 04 Sep 2020 09:55
btw, Felli is frequently recruiting for games in various discords on tabletop simulator. Both playtesting new games and cosmic frog games. He pops in the discord I set up (see TTS thread) a lot and recruits.
Read More...