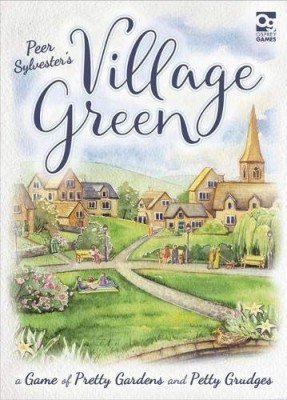 Growing up in rural England, some villages had fancy name signs. Ours did not, and provoked an early sense of injustice in my childhood self. Years later I learned those signs were the prize for winning the county village green competition. So when Village Green landed on my mat, promising to be a game of petty grudges, it felt like a great chance to redress that wrong.

First, though, I had to select a village card from the five on offer. I settled on the soothing lilac and idyllic openness of Hither Saxcote. Next to this, I deal out three award cards face up. One gives me prize points for Variety in Trees. Another is Floral Variety. And the third is the wryly-titled Diane Yeller Award which offers three points for a particular shape of yellow flower.

My weapons in this grudge match are my hand of three green cards. Most of these are flowers, a combination of one of three colours and one of three shapes. The yellow ones are hard to see on the white background but, squinting, I can see I have one of the type that Diane Yeller likes. So in the excitement of a new game, I slap it down in the column beneath that award. Three points in the bag.

Except that as my Village Green grows into the three by three grid it will fill, it hits a problem. The award column next to Diane Yeller is Floral Variety. Flower cards have to match either the colour or shape of all adjacent cards. So while it's easy to lay a yellow flower next to my first one, I then need another yellow flower of a different shape to get the variety. There are three face-up green cards to choose from each turn or a blind draw off the top of the deck. None are forthcoming. I have to lay in a different column, and hope. 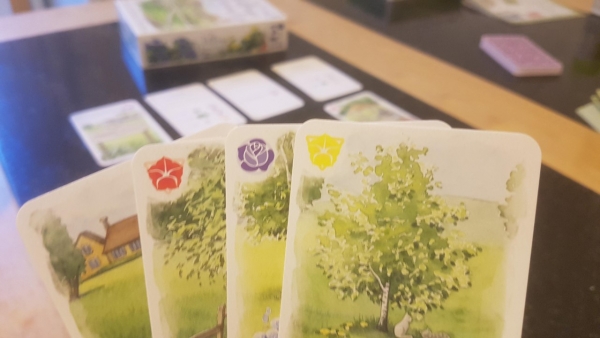 Since I’m making a three by three grid, I can also add award cards to the rows as well as the columns. Again there’s three of these face-up or I can take a blind draw. Scanning them over the cold reality of Village Green washes over me with a shiver: this is a maths optimisation game. It’s all about working out how I can combine the options from the visible green cards with the visible award cards to get the biggest score.

Disappointed, I lurch through the rest of my first solo effort. Having already derailed myself with that careless yellow placement, the best of my green ends up limp, lifeless and incomplete. The adjacency rules mean I can’t even finish my three by three grid. I get the feeble three points I sacrificed all this for, plus a few more for tree variety: tree icons sit at the bottom of some flower cards. Looking it up in the rulebook my score barely qualifies for “Last Place”. The only grudge match here is against me, for making such a dumb opening.

Optimisation games that wear their maths like rosettes are not my tea party. But that game was very quick, and I hadn’t understood the game concept. Might as well give Village Green another go.

This time one of my awards is Variety in Structures. These are another kind of green card that doesn’t have a flower icon but which get you an award card when they’re played. In the solo game, you can overlay an existing award with your new one. Structure cards turn up in the deal and I set to work, getting awards in early to give me a scaffold with good-scoring green cards when they come up. 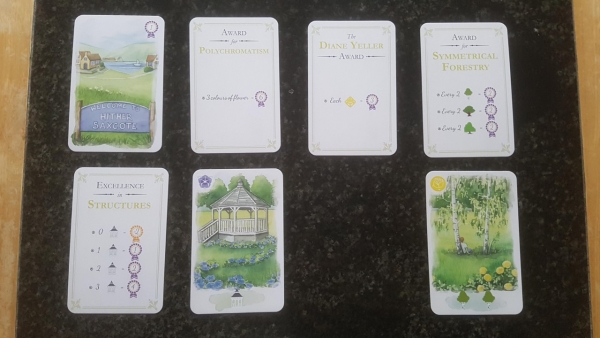 There’s a real element of push your luck here I didn’t notice in the first game. Like Battle Line, there’s an uncomfortable push toward making risky plays before you know if they’re going to pay off. Flipping cards off the award deck, blind, I feel the pleasures of a poker player more than the repetitions of a rural gardener. I finish with a better score, qualifying for “Honorable Mention”. And it still only took ten minutes. So why not another? After the third, it’s got too dark to play and I’d barely noticed.

Maths or not, I’m inspired enough to try this multiplayer. It takes a moment to set up and explain, although finding table space for more than one grid of cards is a problem. And then we’re in, and I’m anticipating those petty grudges promised by the tagline. Immediately, I’m absorbed in the puzzle presented by my opening hand. If I put this here and that there then I might get the other. Or not. The pregnant potential of drawing anonymous cards off both decks is a constant temptation.

But after a few rounds of playing and planning, I realise we’re playing in silence. Heads down, everyone is trying to tie up their own tallies and ignoring what everyone else is doing. A more experienced group might spare the brainpower to try and sneak away the odd card that would benefit an opponent. Yet in doing so, they’d risk losing a good option for their own garden. Deprived of grudge matches, my previous plays power me to a quick, unsatisfying win. 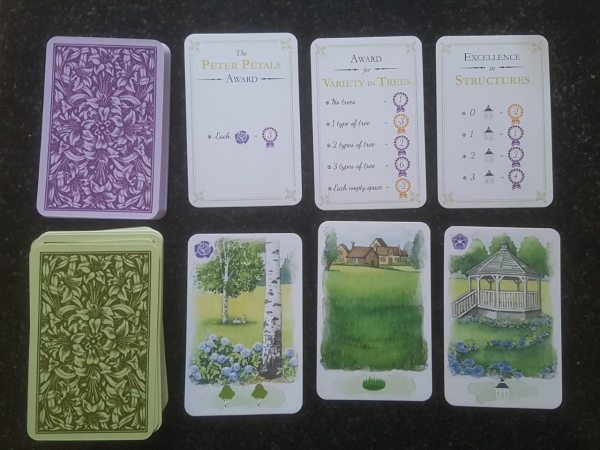 As the last days of Summer fizzle past, Village Green keeps making a reappearance. It’s so simple and quick solo, a far more interesting use of ten empty minutes than scrolling Twitter. I’ve often bemoaned games that feel like puzzles, but Village Green sidesteps the traps of that style with deft grace. First, it’s fast and pleasing to solve solo, so there’s less sense you’re missing out on the social side of gaming. Second, its conundrum is simple but full of variety, the interplay of six awards and nine green making a different puzzle every play.

One evening, dealing a wobbly grid on the sofa while the kids get ready for bed, I get a lucky draw with a bunch of pond cards, each of which gives a two-point bonus. It’s an auspicious start but I have to bring my brain to bear to make the most of it. Ensuring that that flower will dovetail with the awards on each adjacent column and row, planning ahead with the cards I can see, taking a risk when I’m out of options. In the end, my grid totals a high of thirty-four points: one off the top rank. I feel both cheated and elated to have come so close. Perhaps there’s more satisfaction in settling solo grudge matches than I realised.

September 10, 2020
Rating
3.0
Village Green
A mathsy optmisation puzzle that shines best as a solitaire game, thanks to a fast play time, lots of variety and an addictive balance of strategy and risk.
MT
Matt Thrower #1 Reviewer 286 reviews

ChristopherMD wrote: Who is listed as the artist? I searched and didn't find.