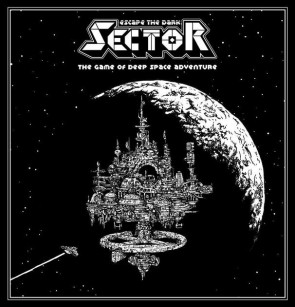 What a beautiful way to die – as a falling star.

Of all the potential settings for horror, surely the darkest expanses of deep space are the most suffocating in their capacity for cold sweat dread.

The theme that resonates most chillingly with our primal sense of terror when confronted by the unknown. The place that pushes our psychological buttons with the most practiced insistence.  The claustrophobic tension of being encapsulated in the fragile tech-womb of suit or station, only the thinnest patina of circuits and fibre separating us from the unyielding vacuum and dizzying expanse of the pin-pricked void. Untethered, into the unknown, alone.

It’s enough to make you soil your astro-britches.

And into that vast black canvas the projections of men are writ large, plucked from our collective vat of phobias and affixed with terrifying mandibles, diabolical intelligence and so very many legs. Chitinous life-forms, skewed-logic automatons and swarthy freebooters- all straddling the retro-futurist chic of the very best 1970’s analogue imagining of our cold future in the embrace of the depths.

Escape the Dark Sector, the new release from Themeborne Games mines these archetypes as adroitly as the Jupiter Corporation mines planetoidal ores, condensing them into a dense dark matter. A 45-minute jaunt of thrills, chills, awesome art and shitloads of dice. A lovingly camp collage of sinister science-friction, and a fantastic evolution of their 2017 debut Escape the Dark Castle. 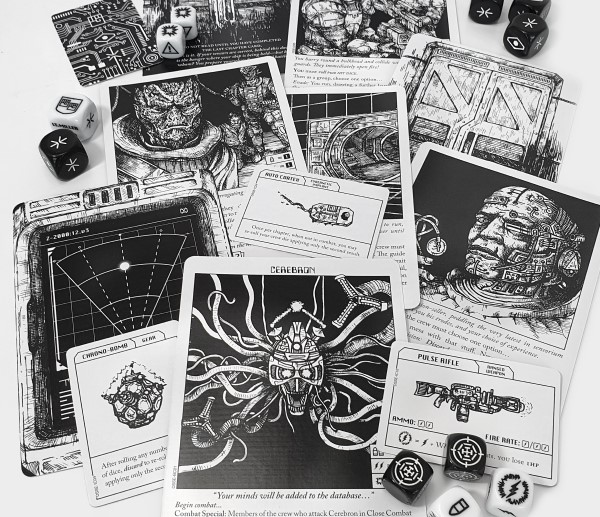 In the beginning, there was darkness. And the darkness was without form, and void.

Those of you who have experienced their previous title will know what you’re in for here, although in returning to this well, the scribes at Themeborne have not only swapped out the mildewed labyrinth of old for a blinking web of corroded airlocks, they’ve upped the ante in terms of mechanical depth and strategy, adding enough new wrinkles to the formula to engage anew without disturbing the delicate balance of lightweight fun that made the original such an accessible and addictive romp.

A narrative game predicated on a sense of tension, masterful use of theme and pressing your luck in the face of encroaching doom, EtDS soars in its capacity to elicit wide-eyed player engagement from the most meagre of mechanics. This is a game that will see your group erupting in both ecstatic cheers and exasperated groans as their characters play and fall prey to the machinations of dice and deck in their desperate flight.

As in Dark Castle, their travails will be signposted by a randomly determined deck of lovingly illustrated tarot-sized cards that set the scene(s) with a combination of grimly evocative linework art and rich flavour text that both succeed in doing a lot with a little to conjure a sense of space and circumstance. New to this version however is the addition of difficulty tiers to the cards, with the deck now being divided into three escalating segments, culminating in a dread boss-fight and signified with a delicious nod to the motion-tracking devices from ALIEN. The more dots, the more doom- and in partitioning your experience in this fashion they’ve ensured you’re far less likely to cop a demoralising game-ending smiting in the early rounds.

This time around they want to nurture the flickering candle of hope, allowing a sense of hubris to flourish before brutally dispatching you with a morbid glee. 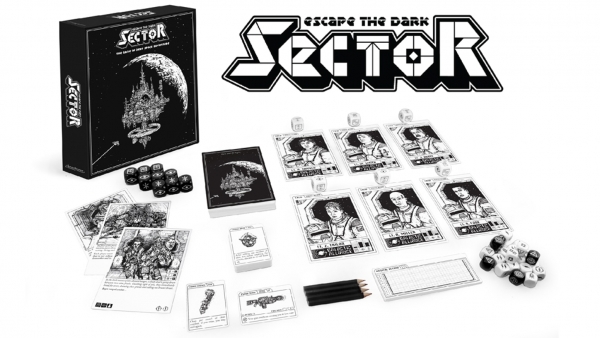 Anybody ever tell you you look dead, man?

And be dispatched you will. You’ll expire, you’ll die, you’ll be crushed, corrupted, corrugated and killed. Over and over again. The pitiless denizens of the sector will see to it if the hazards of the environs don’t. Your avatars are squishy and fallible things, prone to the debilitating effects of madness and the ballistic screeds of murderous foes. Although this time around- and I can’t stress this enough- you’ll have access to A SPACE BAZOOKA.

You’re not without a fighting chance is what I’m saying. Each of your crew members will start with not only a cybernetic implant plucked amygdala-wet from Elon Musk’s most fervent dystopian fantasies but also a death spitting pistol with which to engage in the games most robust new addition, that of ranged combat. 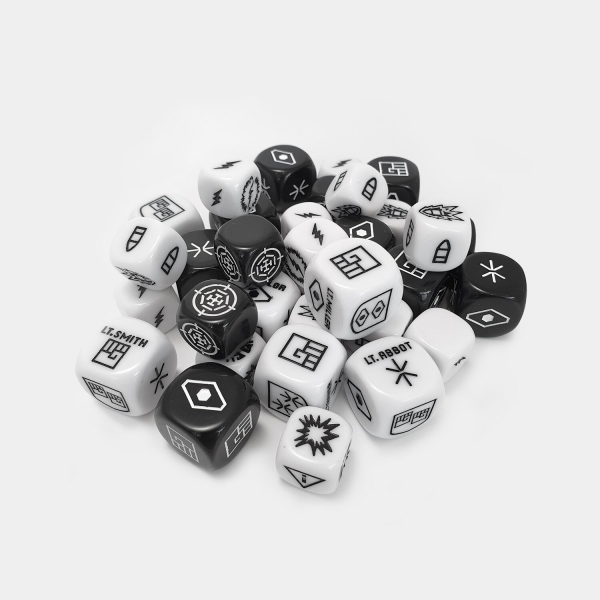 Open the box and you’ll be greeted with more dice than there are grains of sand on our earthly beaches. In addition to the returning character and chapter dice from EtDC, this plethora of polyhedrons are present in service to the expanded possibilities enabled by the plasma beams and leaden bolts of your projectile weapons. Prior to engaging in close combat, your crew can elect to let slip with a series of ranged volleys to pepper and perforate, provided they have sufficient remaining ammo dice that is.

Also new is the ability to flank your opponent, risking being winged by a stray shot in the now for the boon of protective cover in a succeeding round and adding a further gambler’s chance to proceedings. It’s all joyfully luck based, although the mitigation afforded by the salvage and scrap you loot upon the way will steer your hand in favour of the kindest odds, your pragmatic sense of preservation wrestling with your inner Leroy Jenkins as you weigh your options.

These salvaged rains of plunder will also precipitate a satisfying side of inventory management as you struggle to parse the best load-out that can be squeezed into a 2×2 set of slots, with the most thunderous tools in your arsenal crowding twin spaces as you ponder the efficacy of stun grenade vs. therapeutic serum vs. ENORMOUS SPACE COCK in maximising your spread.

Close combat and encounters generally mirror those of Dark Castle. Each crew member will resolve their interactions with a character die that’s weighted to reflect their aptitudes, be they physical, mental or practical. Roll matching symbols to wound or resolve and balance your party’s strengths and weaknesses according to the demands of each situation. It’s simple but satisfying and what it lacks in complexity it makes up for in swiftness and the joyous kinetic heft of tumbling those huge and beautiful dice.

Furthermore, many encounters will offer you a choose-your-own-adventure style junction that offers to stagger the odds in lieu of better bounty. So do you feel lucky, punk? The encounters themselves have evolved between iterations too. In our play-throughs so far we have found the majority of scenarios more engaging and mechanically involved than those in Dark Castle, as the developers built upon the foundations across a series of expansions and came to this title with a new-found sense of confidence and creativity. From psychedelia inducing consciousness uplinks to mysteriously caged benevolent beasts – the variety on display here is a huge asset as, despite how much fun is on offer in this box, it brings us to perhaps my only real issue… 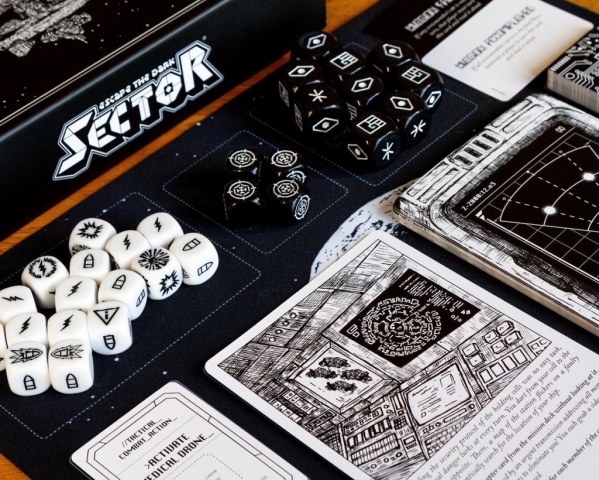 To Ganymede and Titan, yes sir I’ve been around

…that what initially seems like a generous spread of 40+ encounter cards will inevitably dwindle and be dulled by repetition on return trips to the sector. Your experience will be different every time- the random order of both encounters and items, not to mention the vagaries of the dice will see to that, but it won’t be too long before you’ve exhausted all the novelty this experience has to offer. Whilst more generous than its progenitor in the amount of boss cards it offers, and in offering a previously expansion-locked selection of three starting cards, I still would have loved to have seen the deck of encounters doubled, even at the expense of cost and accessibility so as to furnish this thing with sturdier legs.

Having said that though, there are certainly many hours of terrifying fun on offer right out of the box, especially if you play with various groups- and the breadth afforded by further expansion is surely on the horizon as I cant see this one failing to be embraced in a similar ravenous fashion to its antecedent. Put simply, my only complaint is that I want more, and surely as a developer this is the kind of criticism that falls into the ‘good problem’ category. And again, it works perfectly well as is- in fact after my recent exhausting bouts with big box bloat, this more focused approach was a refreshing and adrenalising shot to the jugular.

Fast, fun, furious – and it has a SPACE BAZOOKA. EtDS is a real dirty gem and one of those rarest of constellations – the perfect sequel. It takes a beloved formula and improves on it in almost every way without sacrificing the spirit of the original.

Lovingly produced, gorgeously illustrated and wildly accessible, there are definitely worse ways for you to die. 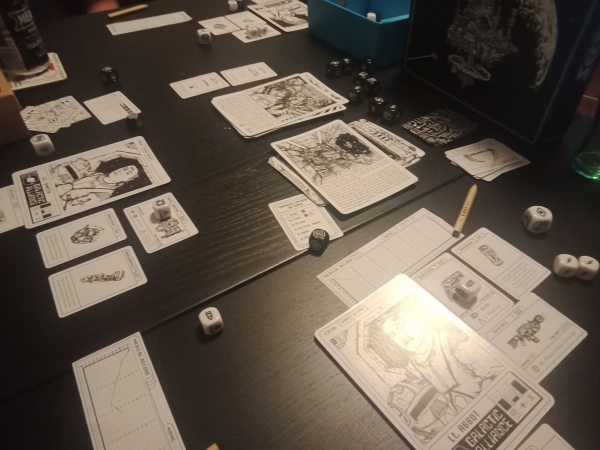 September 14, 2020
Rating
4.0
Escape the Dark Sector
A lovingly camp collage of sinister science-friction, and a fantastic evolution of their 2017 debut ‘Escape the Dark Castle’.

Matt Thrower replied the topic: #314135 16 Sep 2020 04:33
Great review. I enjoyed the fantasy original but the fact it was nothing but a thinly-dressed dice fest let it down. If I understand how the motion tracker thing works correctly, that's a stroke of genius both upping the level of decisions and the theme at the same time.

Matt Thrower wrote: Great review. I enjoyed the fantasy original but the fact it was nothing but a thinly-dressed dice fest let it down. If I understand how the motion tracker thing works correctly, that's a stroke of genius both upping the level of decisions and the theme at the same time.

Oh it's 100% a dice-fest! But sometimes that's a massive plus. If say for example.... you just spent a month playing a slog of a campaign game with endless drawn-out card based faffing.

The motion tracker conceit signposts the difficulty of each encounter but if you're playing RAW then they're meant to stack in ascending order. Shuffle them up though and you have a cool thematic hint as to which of your crew to take point before flipping into the fray. There's more agency across the board than in EtDC- but never a huge amount. It's still more of a wild spook-house ride that will most likely come to a grisly end.