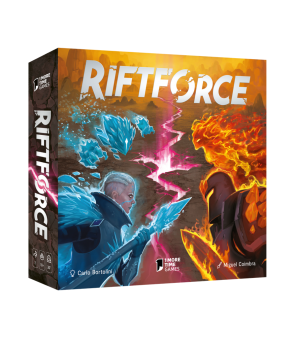 In the long, long ago. In the before time. When people could hug each other and play games around a table, Jamie and I attended UK Games Expo 2019. On day 2 of that con I had been directed to a small game piggybacking on another stand. That game was originally called Chapter 2 and I was accused by some, looking at no Rory Sommers of Polyhedron Collider in particular, of being a hipster for calling it my game of the con.

Well now that game has been through the development cycle and is out on Kickstarter! Renamed Riftforce the company behind it is 1 More Time Games. The game itself is designed by Carlo Bortolini with art by Miguel Coimbra. I had a chance to play a game with Roman, one of the founders of 1 More Time Games, on Tabletopia.

Riftforce is a simple proposition: a 2-player card game wherein you battle each other for supremacy using a deck of elementals that you have summoned for the purpose. There are 10 guilds in the game, and each time you play your deck is going to be made up of 4 of them giving you a different blend of abilities each game. Each guild allows you to do a different thing, and each card within that guild will have that power: causing damage, moving battlefield, dragging enemies from one place to another etc. It is these combinations of powers, and how you utilise that form the core of the game. 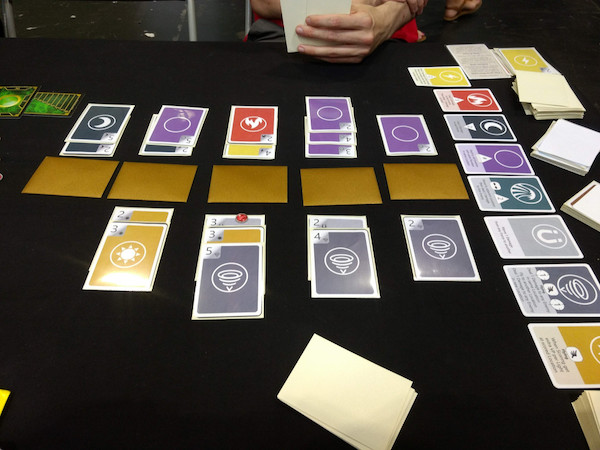 Riftforce in play when it was called Chapter 2.

What impressed me about the game at Expo, and still does now, is how the decisions you make are simple but come with a depth and weight. Each round you are going to either play some cards to the battlefields, activate some of the cards you have in play, or score and draw. Activating elements means discarding a card of the same guild as the cards you want to activate, or you could activate a number instead by discarding a matching card, allowing you to combine the powers of different guilds to create a unique combo.

My combination of powers. 1 dealt randomly the other 3 drafted.

When you choose to draw, the only way you can refill your hand, you also score for each battlefield you are alone at. Taking out your opponent’s elements also gets you victory points, and the race to get ahead feels tight, with every turn providing drama and hard decisions: keep this, play that, power this combo now before my opponent ruins it! Timing is everything in this game, and you are always planning ahead just a little, trying to anticipate what your opponent will do with the resources on the table and in their hand. 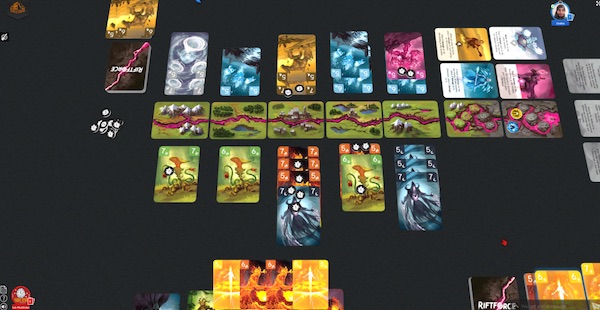 A game in full swing.

Riftforce contains a huge amount of potential replayability. The variety of the powers, the simplicity of the rules, and the depth of play will see me backing it for sure and being a game I pull out to show people the potential of finely honed small box games. It’s a great calling card for a new designer and I look forward to giving it a full review. Riftforce is on Kickstarter now!

First Thoughts pieces represent our very raw impressions of a game after an initial play. They are not full reviews and should not be regarded as such. The game was played on Tabletopia with the publisher.

September 20, 2020
Rating
5.0
Riftforce
Riftforce was Iain's game of UK Games Expo 2019, that seems like forever ago now. It's hit KS recently and Iain had a chance to give it a shot in its final form.
T
thegiantbrain Top 50 Reviewer 36 reviews