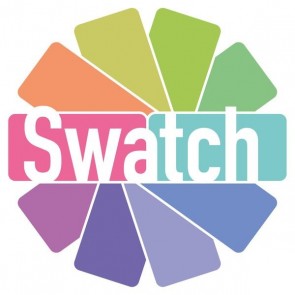 When you read that a game is good for families, it means one of two things. First, it’s a super simple blast like Uno or a dexterity game like Pitchcar. Second, it’s a light Eurogame that isn’t really good for families at all but the reviewer is too mired in their own obsessions to tell. Such games tend not to be simple, not to be engaging, not to involve much strategy or a mix of all three.

Well, Swatch is a game that’s good for families, and it’s a light Eurogame and the usual caveats do not apply.

The goal is to be first to make three Swatches of different colours. The colours are mixed from different amounts of Red, Green and Blue tokens. They themselves are mixed from pairs of yellow, cyan and magenta tokens. Designed by an actual artist, Swatch is trying to teach you something about colour theory and how prints are made. Beyond that, it’s pure abstract territory.

On your turn, you get a card and then place an artist meeple on a card row to select another card. You can add that card to your hand, play it right away or discard it. Then you can play a card from your hand if you wish. Some cards give you an amount of a base colour. Others let you mix an amount of base colours into red, green or blue. The final kind lets you “swap” a colour with another player, but you get to choose both what you give and what you receive. So it’s more like a polite theft than a swap.

And that’s pretty much your lot. There are some wrinkles in the process: you can see the card row available for the next two turns in advance. And who gets to go first is determined by who put the leftmost meeple in each row. So you can plan your colour acquisition in advance and work first player advantage into the bargain. See, it really is easy enough for families, and it only takes fifteen minutes per player to play. That’s the first caveat cleared.

The second caveat in these kinds of things is whether families find it any fun. Most light Eurogames are too opaque, too demanding or too boring to garner much interest. For those unfamiliar with drafting and optimisation games, it can take a turn or two to get the hang of things but then they’re there. And although your primary concern in Swatch is your own palette, it pays more than lip service to attend to what other players are doing. A well-chosen swap card that completes one of your sets just as it denies an opponent theirs is a fine thing indeed. 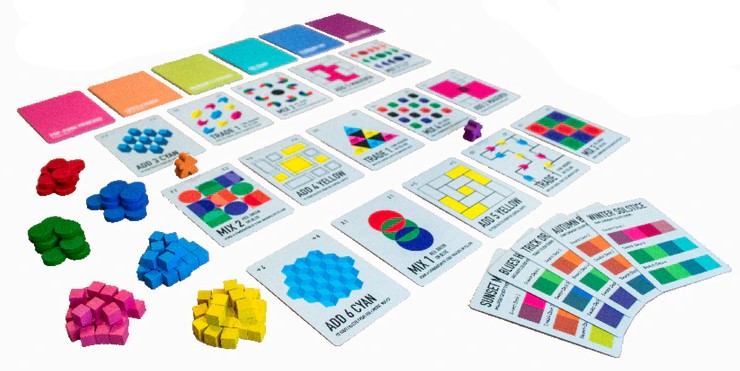 As you’ve likely guessed, Swatch is essentially a race to the finish. You get base colours in awkward amounts like fours and sixes, but you can only mix up to RGB in ones or twos. That makes it very easy to oversupply yourself with raw materials which is, of course, exactly what you’re aiming not to do. Whoever gets their three Swatches first will be the player who’s used their cards and actions with the least waste.

Indeed the game makes this explicit: once you’ve made your Swatch, you have to give away remaining tokens one at a time and only when you’re out will you be declared the winner. So other players have a chance to catch up, further punishing wasteful accumulators. This can lead to some tense finishes and it also clears that third caveat. The game rewards skill but has enough unknowns to keep it tense up until the death.

Regular readers will note I’ve abandoned the usual storytelling mode I use for reviews and that’s down to the biggest issue with Swatch. For all its qualities, it’s a game about collecting cubes and it feels like a game about collecting cubes. This is particularly true of the solo game which is well designed and faces you off against an automated artist rather than aiming for a high score. But when it’s only you pushing cubes for yourself and your AI opponent, it highlights just how abstract proceedings are.

But you know what? As I say round the table picking cards with my kids and my graphic designer wife, I was the only one that noticed. Everyone else was too caught up in the colourful race to the finish that Swatch represents. And they regularly beat me too, which is the fourth unspoken caveat of alleged family games where the hobbyist always wins until everyone else gets bored. Family-friendly optimisation games may be a niche market but right now, Swatch is the only title that truly fits that bill.

Swatch is available to back on Kickstarter now.

September 28, 2020
Rating
3.0
Swatch
A rare title that has the capacity to please strategy gamers and family player alike, although it is very abstract in its execution.
MT
Matt Thrower #1 Reviewer 286 reviews