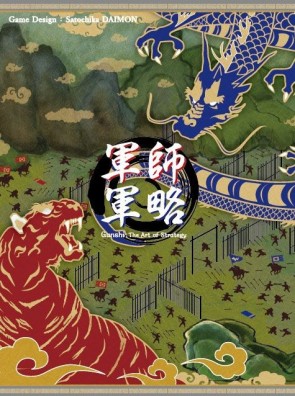 The longer I've been in this hobby, the more I am impressed when a game is able to thread the needle of rewarding good planning while still letting players improvise in the moment. It is easy to lean too hard in one direction or the other, either making a stuffy experience that punishes new players or a totally bonkers experience where everything is unstable. It is worth applauding when a game finds a good balance between these two extremes. The balance is what has impressed me so much about Gunshi: The Art of Strategy.

Designed by Japanese designer Satochika Daimon, Gunshi is named for a position in East Asian military history, translating roughly to "strategist" or "tactitian." While to a North American this seems about as broad a description as a wargame of any type could have, it is at least an apt one. The players each take the role of a "gunshi," and must craft a battle force made up of infintry, archers, and cavalry. This done through a point-buy system, where the player is given a certain amount of "strategic energy" that can then be spent on different forces, usually coming out to roughly a half-dozen units. The two sides utilize tactics cards to move these pieces around the board until one of two goals is met: either you capture the other player's secret "shogun," chosen at the beginning of the game, or you get three of your own pieces onto the opposite end of the board and remove them as "invaders."

There are a lot of places where this game could have become very tiresome, but Gunshi admirably sidesteps almost all of them. Let's start with the point buy system, where the players form their own forces using a limited budget of "strategy energy." (Side note: I love the idea of strategic energy, and I will heretofore use a lack of it as an excuse whenever I lose a game.) It would have been easy to make this process too granular, with too many points to spend or too few differences between the cost for the different units. But you start with just 18 points, and all of the units cost between 2-4 points, with an option to buy a fence piece that impedes movement and line of site for a single point. It's just flexible enough to provide several approaches without feeling overwhelming. If I had any complaint here, I would like to have had some example armies for players just starting out. Buying forces is an easy place for new players to make mistakes, and providing some templates would have been useful for us starting out.

Units are moved through a very small set of command cards, which allow the players to move units, adjust their facing, add new fences to the board, or even bring on new pieces. These cards can be queued up, allowing you to plot the next several moves in advance. This is desirable because if you have more cards in your queue, you generate more strategic energy at the end of your turn, which can be spent on more units or a "lighting order." (More on that in a bit.) Of course you don't have to queue up cards. You could always just play the next move, giving yourself some more flexibility. Of course then you wouldn't generate more energy for later moves. I thought this trade-off was one of the most compelling in the game. 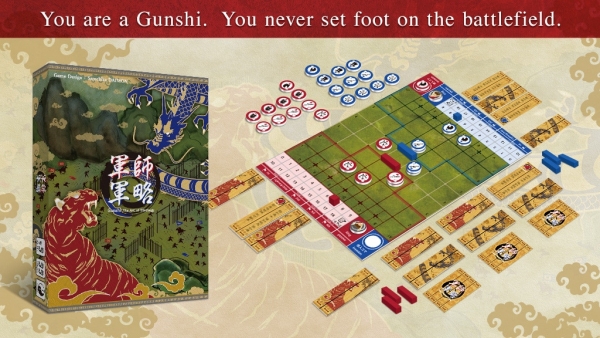 Between building an army and planning moves ahead, there is huge potential for Gunshi to feel deterministic. This is doubly true because there is no combat here; you simply capture a piece if you land on it. But there are some great mechanics here to give the game a sense of dynamism that I very much appreciated. As I said before, you can bring on new units and fences throughout the game. This can drastically alter the landscape of the game, changing the situation in a hurry. The low piece density means that there are also a lot of moments where you need to shore up a line in one place by making your back row vulnerable. There's also a possibility for moving a whole line of units with a single order, which can shift the tide of battle pretty quickly.

However the ultimate "bomb" move in Gunshi is the lightning order. This costs a hefty 6 energy, but in exchange you can add a card to one that is already in the queue. When that spot is resolved, you resolve both cards, allowing you to have two moves in one go. This is a very strong move. It offers a lot of flexibility when planning moves, perhaps a bit too much. Lightning orders aren't exactly overpowered, but they do short-circuit the choice of queing cards or not. Since you can create plans on the fly, and since you get more energy by queuing more cards and can pay for more lightning orders, there's really no good reason to hold back on queuing up every card you can. It's not unbalanced (not that i've observed anyway) but it definitely dilutes what was potentially the most interesting choice in the game.

But I think the trade-off is overall worth it, because it allows Gunshi to walk the tightrope between strategy and tactics really well. Here is a game where planning is very important, and where grave mistakes can be made before the game even starts, but that also gives the player great flexibility to change those plans as the situation warrents. It is neither staid, not chaotic. The is the Goldilocks zone of strategy vs. tactics: just right.

I do think it's fair to wonder how this game will work after people have had some time to sit with it. There's not a wide selection of units or command cards, and the deterministic combat means that there could be some dominant strategies that reveal themselves down the line. But it's important to remember that this is a very modest production. While I played a Japanese language copy, the images on BGG from the upcoming Kickstarter suggest a similarly streamlined physical product. This is very much in keeping with the sort of game that Gunshi is, and for the amount of game in the box some long-term dominant strategies are perfectly acceptable, assuming that is a problem in the first place.

Gunshi is an admirable light wargame, the sort of design that we need in the hobby. Its razor-sharp tension between short and long-term planning is impeccable, displaying a sense of balance and variety that surprised me in both directions. This is the sort of game I would recommend to people who miss the old days of Victory Point Games, or who still trot out their $3 copy of Ogre after all these years. Gunshi belongs to that proud lineage, and I look forward to continue exploring it.

Gunshi: The Art of Strategy is on Kickstarter until October 26, 2020.

(Sorry. Thanks for the thorough review. I agree with your conclusions and who it may appeal to.)
Read More...