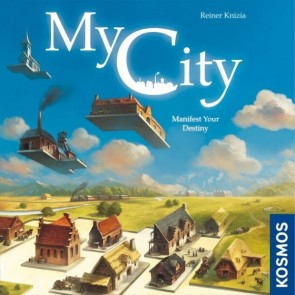 A fun game with a terrible tagline.

Playing a Reiner Knizia game published by Kosmos creates a feeling of warm nostalgia. It reminds me of days long past, when there was a certain exoticism to playing German games and exploring these neat, smartly designed family games that you often had to import at exorbitant costs. And they always had that smell of new cardboard. I’m pretty happy that Dr. Knizia’s latest issue, My City mostly lives up to these winsome reminiscences. But it’s also a legacy game, which is somewhat unexpected, but like Bowie Knizia often dabbles in more recent trends and fads. So this is kind of like his drum and bass record, as Earthling was for Bowie.

The mechanical concept is simple: fill in the spaces of your grid board with Tetris-like polyominoes representing the buildings of your titular city, with a card draw indicating which piece everyone has to use on their turn. Knizia has done this kind of thing before, most specifically with 2009’s FITS. But the 2020 energy here is that there are 24 episodes in a campaign, and after each result in permanent and unique changes to each player’s board with stickers creating or unlocking different rules, scoring opportunities, arrangements, and obstructions. As the campaign progresses, there are many surprises and changes that pop out of the sealed envelopes. I don’t want to spoil any of them, because part of the experience that was particularly delightful was the surprise of how the game changed over time and in fact created a sense of narrative progression over time.

After each game, you score it all up and this is tabulated based on a couple factors that are modified as you play through the campaign. But the basic idea is to get as many of your buildings on the board as possible and to cover up as many spaces as possible – this is very much a multiplayer puzzle. There’s a subtle environmental angle in that each tree that you have NOT covered is worth an extra point. Any rocks that you haven’t built over subtract a point. Early on a bonus is introduced where the largest contiguous groups of same-colored buildings earns bonuses and eventually other rules, stickers, and tiles are folded into the game and it becomes progressively more nuanced and complex in terms of maximizing your points.

But it never gets too complicated, and it remains easy to play throughout. If you’re just bad at it or find yourself making terrible civic development decisions, a nice thing is that the losing players in each game kind of get the better rewards so it tends to handicap struggling players although they may be falling behind on points in the overall scheme of things. It’s true that this is something of a rubberbanding policy, but given that this is family game that you might be playing for at least 24 games it should be acceptable to all but the most competitive alphas, who probably ought not play this anyway, that it affords the ne’er-do-wells a little lift.

This is a pleasing, well-made game with a decent price point and even though I generally dislike legacy anything, my family and I enjoyed making the game experience our own. We wrote on the boards and everything, as you are supposed to, and by the end my kids and I felt completely satisfied with it but also finished with it. There’s an “eternal” mode on the flipside where you can play without the legacy elements, but really the progressive unlocks are such a big part of the game I’m not sure why you’d want to go that route.

There is one demerit and I’ve already voiced my opinion on it on social media. The front of the box offers the tagline “Manifest your destiny”. This created a very negative first impression for me, as the slogan directly references and calls to mind Manifest Destiny, which is a real-world nationalistic term that was used to justify America’s imperialistic westward expansion, that it was God’s will that early American settlers expand their virtuous European culture across the continent. Which, of course, also includes the genocide of indigenous Native Americans and the outright theft of their lands and property. This is not something I want to be put in mind of when playing what is otherwise a lovely, abstract family puzzle game. But that statement, with some of the box copy, contextualizes the narrative in a very negative framework. The problem is that Manifest Destiny is a very specific term and using a catchphrase that alludes to it inadvertently positions the game in alignment with imperialistic nationalism, American exceptionalism, and a white supremacist view of history.

I want to be clear here that I do not think that these implications are the intent of Dr. Knizia or Thames-Kosmos. I’m giving the benefit of a doubt to whoever wrote and OK’d “manifest your destiny” that it was simply an oversight or a misunderstanding about what it means. As this is an internationally available game, it could also be a translation issue, either cultural or linguistic. Regardless, it’s unfortunate that my first take on this game was negative after seeing that on the box.

I also want to be clear that although the game depicts settlement of “new” region there are no specific references to any people or populations. Which could be, in its own way, an expression of the European fantasy of colonization, of fertile and unclaimed land ripe for development. This does make the subject matter (such as it is, for a polyomino placing design) potentially problematic, especially at a time when many gamers are looking for themes and concepts that do not include colonial or imperialistic elements. Seeing as Dr. Knizia is the single greatest designer alive in terms of expressing themes through mechanics (as opposed to conveying subject matter through pictures and words), it is disappointing that this game doesn’t have much to say other than “don’t build over the trees.” So I’m coming away from My City, a game which I did very much enjoy, and wondering if it really needed to be about (again, such as it is about anything) settlement and development of a “new land”.

Thanks to Thames Kosmos for supporting our site with a review copy of this game. We do not accept payment for any of our content.

ubarose replied the topic: #314923 08 Oct 2020 13:25
Just seeing the phrase "Manifest Destiny" transports me back to high school, with by BFF Margie Taylor poking me with a pencil to keep me awake, and Mrs. Blair said, "Ladies, are you okay back there? Does someone need to go to the nurse?" (which was polite code for "behave or I will send you out of the room"), while Stephanie Waddle looked on in disapproval.

mc replied the topic: #314935 08 Oct 2020 20:45
Yeah it's an odd one.
I lean towards it being an naive translation.
If the game involved, say, only building up from one side of the square in an east -> west kind of way, there might be pause for thought.
I tend to find putting individual buildings into a little town on open space a bit less problematic than spreading over a wider area, but, yeah, the empty space has been done and done again hasn't it. For Knizia though, "don't build on these squares if you can help it", I mean, I don't think you'd expect much more mechanism -> theme interplay, right (and this is from someone who fully buys into your Master of Theme stuff Michael!)?

I guess there's a few ways in, but the big one would just be a complete retheming of the whole thing; placement of polyominoes, I wonder, what would be a better, less euro-fantasy type angle? Perhaps just the reverse; make it urban fringe brownspace that can be reclaimed as various kinds of nature reserves and sustainable energy/food production sites. Even keeping the trees works with that.

dragonstout replied the topic: #315291 17 Oct 2020 13:10
I've been playing one episode a day with my kids, and I've been really surprised and impressed. Reading the rulebook, it frankly sounded pretty uninteresting, and I took a flyer pretty much just because of the SDJ nomination, Knizia's name, and the legacy format. It's even completely missing what I think of as Knizia's signature, which is the intense interaction you see in just about all his games.

But boy, if his ouvre as a whole has a lot of "theme and variations" in it, this game is his theme and variations all by itself. I am only in the third chapter (each chapter has 3 games), and I am blown away by how each little change has dramatic implications on the game. Even beyond that, it's way more engaging than I expected. Really surprised by this!

I mentioned liking legacy games, I think in sharp difference from many on this site. For me, this might be wasteful, but I find the disposability...comforting? With other games, I fret about whether we have enough space, whether the game is a keeper, etc. With legacy games, I both KNOW that we'll get a whole bunch of plays out of it, AND I don't have to worry about finding space on the shelf for it. We'll play it, get our joy out of it, and then be done with it.
Read More...