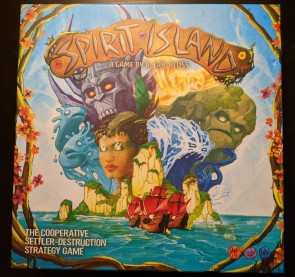 They are here. With their ships, their towns, and their people. They have invaded our land, killed our people, taken what they think is theirs by right. They think their way is the only way. We are the guardians of this land. We will show them they are wrong.

They are here. With their ships, their towns, and their people. They have invaded our land, killed our people, taken what they think is theirs by right. They think their way is the only way. We are the guardians of this land. We will show them they are wrong.

Spirit Island passed me by when it came out in 2017. Designed by R. Eric Eurss this is a co-operative game of beating back colonial invaders to your once peaceful Island. Who are you to oppose these colonisers? Well you are the guardian spirits of the island: the rushing river, the stony mountains, the verdant wild. Each of you is an aspect of the island paradise, compelled to push back the invaders. The boards you get for each spirit have wonderfully evocative art and a brilliant name. You aren't the lighting spirit you are 'Lightning's Swift Strike'. You aren't the mountain spirit you are 'Vital Strength of the Earth'. Great design choices that evoke the spirit of the game. 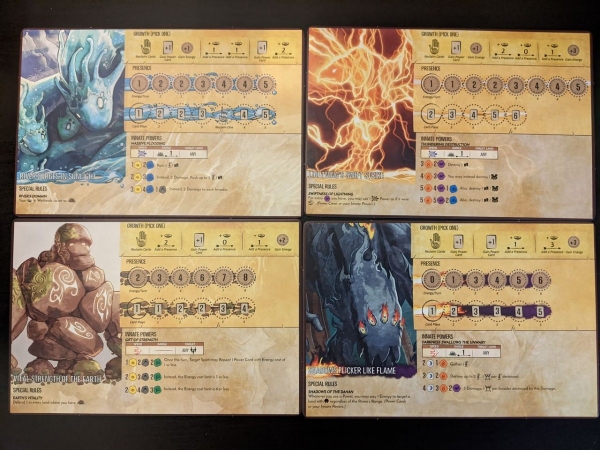 The four easiest spirits to use.

One purpose, many paths. Each spirit is unique, designed to fight back the invaders but in their own unique way. Maybe you’ll specialise in burning them to the ground, moving them around so you fellow spirits can wreak havoc upon them, or haunting their dreams to cause fear amongst the populace. Fear is fundamental in the game, the more you cause, the easier it becomes to push the invaders from your land, allowing the spirits to triumph.

Each spirit starts small, a shadow of your former powers, the people have forgotten who you are. As time marches on you will recall your former strength, gaining new boons & powers. Starting with only 4 powers to you name you will gain more minor powers and eventually sacrifice some of them to gain major powers, truly destructive abilities that can turn the tide. This is the fundamental core of the game, gaining new powers that you can weave into the engine of your spirit, calling on the elements to fuel your innate powers, revealing new abilities as you adapt against the colonisers. You find the will to push back against the onslaught of the invaders.

What an onslaught it is. As the colonisers spread over the land they build and ravage. They spread blight across the land, and once enough damage has been done to your paradise, there is no hope for you. You’ve failed. A small deck of cards acts as AI for the defenders which, unlike for some co-op games, gives you a look at the future actions of your aggressors. Always will they explore, then build, then ravage in a land, and it is this little bit of predictability that allows you to plan ahead. To peak a little into their minds. 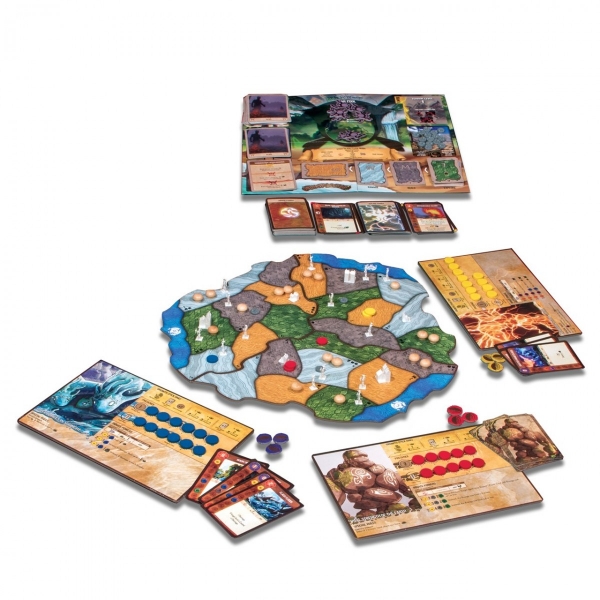 Picture from the publisher of the game setup (I was concentrating on play too much to remember to take my own!)

As they spread, you plot. Your presence is felt. They are moved, blocked, destroyed, and converted by your powers. You may be powerful, but you have limits and it is only in working together that your island will be free of the invaders. Many coop games suffer from quarterbacking, a player telling everyone else what to do. Now this is mostly a people issue, but games can do a lot to try and mitigate it and Spirit Island achieves this in two ways. Firstly your particular collection of powers starts off unique and stays that way throughout the course of the game. Secondly, the spirits are complex enough, and the choices on each turn numerous enough, that it would take a very smart person to hold all the possibilities in their head.

Spirit Island allows the players to feel clever and powerful without making anyone feel useless. The games I’ve played have had an interesting are to theme where you feel small and powerless at the start, but towards the end you can bring the big guns and mop the floor with the pesky colonists.

It's a game that truly rewards a cooperative approach to play, as each turn presents a unique puzzle. More than that it makes you feel really clever as you combine seemingly disparate effects and powers into a devastating turn that brings destruction to those that would befoul your island paradise.

I don’t often mention the much overused term ‘value for money’ when talking about game, but I am going to unpack it for this particular game. Spirit Island may be the best ‘value for money’ I have ever seen in a game as it is amazingly generous with its content. Much like Gloomhaven I am not sure I’ll ever been truly ready to review Spirit Island, there is just so much in this box, but you have to put your thoughts down at some point. Let’s unpack it. 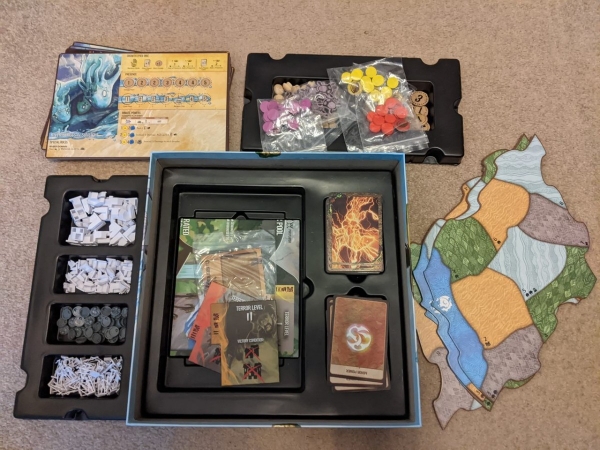 There is a lot of content packed in this relatively small box and the trays actually hold everything!

There is a tutorial mode baked into the game which I thoroughly recommend playing. Spirit Island is a bit of a fiddly game and playing through this mode will let you get a handle on all the various moving parts of the game. I would love to see more games provide a more gentle introductions to their games. This mode is such that you could play through each of the introductory spirits with it and have a good time and that is only one facet of this box.

Each of the 8 spirits comes with a complexity rating and bits of advice on how to utilise them in play, which is a great way to get you going. I would have liked to have seen a bit more advice on the combination of different spirits, as I’ve definitely found some match ups harder than others. There is a load of community advice out there, so you can find this information if you want to. The point is though that 8 spirits in different combinations is a lot of games just by itself.

If you do get used to the game and have played through lots of different spirit combinations you can add scenarios that change the way the game plays. In addition the invaders can be given a nationality changing the way each one acts on the island and each nationality has 6 different levels of difficulty. I’ll admit I haven’t played with any of these as yet, the game is pretty hard. However, I honestly think you could play Spirit Island, just the base box, regularly for the rest of your life and not really feel the need to pick up either of the expansions that have come out for it.

I’ve loved my time with Spirit Island and it is getting the, possibly dubious, honour of entering my collection. From the beautiful art, to the names of the spirits, to the intricate interplay between the spirits, this is a game that oozes character. It is a little fiddly, and lacking a little guidance here and there, but it is very, very close to being a perfect game in my eyes. My only other criticism is that at 4 player it can take a very long time to play, but that might not be a concern for you. There is an expansion that ups the count to 5 and 6 players and I don’t know I would ever want to play it with that many people.

This is a wonderful game. Generous in its content, difficult to master, but not frustrating. It wants you to play it, to experiment, to combine spirits and powers together in unusual ways, just to see what happens. It invites you to puzzle over problems together, whilst giving each player a strong voice at the table. You know I love Arkham Horror LCG, but that requires a lot more financial investment to really enjoy and Spirit Island does not. Spirit Island invites you to defend its shores from plastic marauders, to stay and help its people thrive, to revel in its powers and strategies, and when you are done, you can just do it all over again. Trust me, you’ll want to.

October 15, 2020
Rating
5.0
Spirit Island
The invaders have come to your island. They must be repelled. See how Iain got on beating back the colonists as an ancient spirit in this cooperative game from Greater Than Games.
T
thegiantbrain Top 50 Reviewer 36 reviews