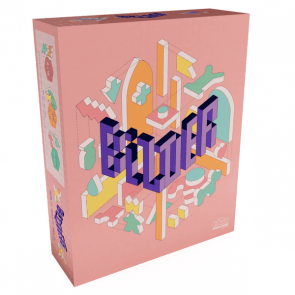 Draw a clue/what card, pick one of the two clues on the card, build/act out that clue with the included shapes for the other players to guess. Whoever guesses correctly, wins that card. But is there more to Bilder (besides making me click “Add to custom dictionary” when writing this review)?

They are all pretty self-explanatory with Rest being “The rest of the stuff that doesn't fit into another category.

A player would draw one of the “What” cards and I would wait for the inevitable question:

Sigh, ah yes, the great mystery of our time. Some of the What cards feature the image of a cloud piece next to the clue. There is no Cloud piece in the game. A note to Monkeyshine games, people really want that cloud in the game. While there are plenty of wooden pieces to build your clues with, we found ourselves wanting for more (and not just the cloud). There is one simple,complete circle in the box but we often found ourselves wishing for two so we could complete the Sunglasses or Firetruck we were building. Maybe it is supposed to be this way, making it harder to give clues? Either way, I could see tossing a bunch of leftover meeples and pieces from the “Board Game Junk Drawer” that most of us probably have just to add to the selections you have. 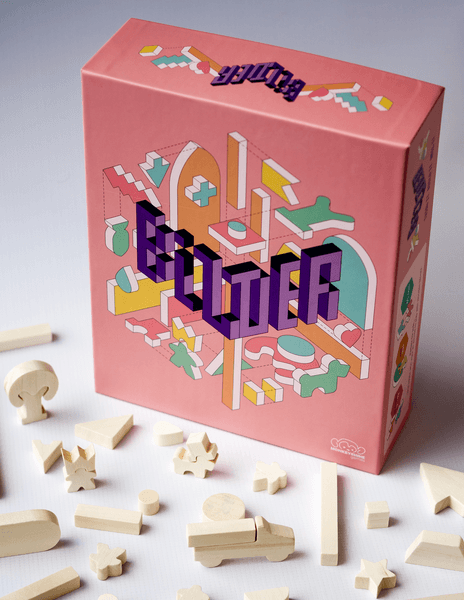 Bilder doesn't have a timer, the clue-giving player assembles his creation and everyone guesses until someone gets it right. The person who guesses correctly gets that What Card. There are those moments of simply building something and repeatedly pointing at it over and over trying to get someone to guess what is obvious to them or you can put on little three act plays of the quality we haven't seen since Mr. Bill graced the screens of Saturday Night Live.

If building isn't enough of a challenge, you also have “How” cards. This is a card the building player can choose that adds rules or restrictions how the way he can Bild (sic) the clue” Like using two pieces chopstick-style to assemble everything else. I guess this is why some people have added Dexterity to it's description. It is not really dexterity, per se. Well, any more than Pictionary rewards true artistic talent. As long as you can get a rudimentary idea across, you don't need to build Rome in a day.

We played fast and loose with the rules: For Instance, while you are supposed to build in silence, we encouraged the use of sound effects when building your clues. It really just added to the “Playing in a sand box” feel of the game. If we didn't like the 3 “How cards” that are out? We allowed players to trade any clue card you have in your to “flush” them and put out three fresh cards. The endgame trigger (A player having a What card from each category so that you spell out BILDER), can take a bit of time. Having a hand dominated by L cards when holding out for the one E card you need to trigger the end of game can make the game drag on. That's why the “How” Cards are really key, it gives the Bilder incentive you do a great job of giving out clues and fills those stubborn gaps of letters you aren't holding in your hand. Bilder does give a nod to someone just not having the luck to trigger the end game since the winner is the person with the most total What cards in their hand (with the person who spelled out Bilder getting a 3 point bonus added to that).

You can play with 2 to 12 players and, due to the nature of the game (where you win by guessing other players clues) it wouldn't be too insane to actually play with the full player count. The most I managed was six players in our quarantine environment but it ran at a rapid pace with that number.

Sure, I could pick apart the lack of a time restraint on rounds, the clue-giver having the ability to pick a category to make sure another player doesn't win and various other “Bah Humbug” chances ultra-competitive players have to ruin the game for everyone. Bilder is essentially charades with wooden shapes. But the thing is, it doesn't need to be more than that to be exactly what it was meant to be: a fun, casual party game.

October 18, 2020
Rating
3.5
Bilder
Bilder is essentially charades with wooden shapes. But the thing is, it doesn't need to be more than that to be exactly what it was meant to be: a fun, casual party game.
W
WadeMonnig Top 10 Reviewer 195 reviews

WadeMonnig replied the topic: #315973 05 Nov 2020 20:19
My favorite part is building something and then repeatedly pointing at it over and over like it will suddenly become clear if.I.just.point.at.it.harder!
P.s. the lightning and fire pieces are Sluggos favorite.

WadeMonnig wrote: My favorite part is building something and then repeatedly pointing at it over and over like it will suddenly become clear if.I.just.point.at.it.harder!

It's like speaking Tourist: If I say things LOUD-ER and SLOW-ER, you'll be able to understand me in any language!
Read More...