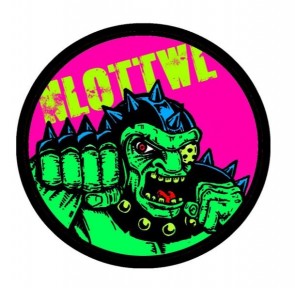 Beyond Thunderdome, beyond good taste.

If the neon smear aesthetic and outrageous neoliberal excess of the 1980’s are perhaps too oft romanticised it is perhaps because in truth they represent the last decade we are able to compartmentalise as a neat universal cultural touchstone. Before the arch irony of the 1990’s and the post millennial splintering of the monoculture into the innumerable shards enabled by the adoption of the internet, the 1980’s represented the last gasp apex of both subcultural tribalism and misplaced optimism for the rapacious ideals of capitalist democracy. Fanned by the cooling embers of a dying cold war and amped up to eleven by the ubiquity of cocaine certainty, the archetypes of 1980’s iconography were pleasingly one dimensional in both their rainbow bouffant and monochromatic morality, and as a generation weaned on them comes of age, it is no surprise that it is a well we return to with an addicts insistency as we grabble for more readily digestible ideas and ideals as a form of bolstering comfort in an age of otherwise rampant uncertainty, entropic storms and general bum vibes. 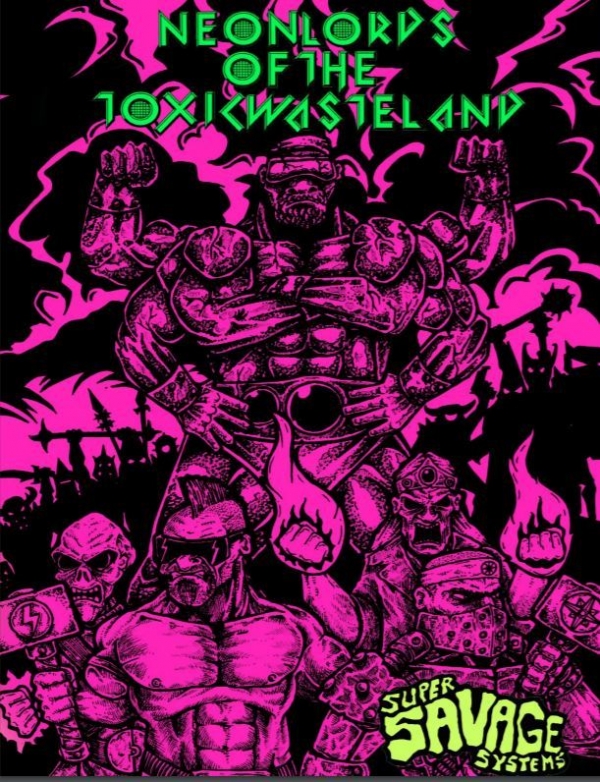 Through the mirror-shade lens of 1980’s Americana, even dystopian visions took on an aura of high fructose madness, donning leg-warmers and spraying their hair in gravity-defying feats as they cavorted wildly beneath the shadow of the mushroom cloud. The fact that this now-antique vision of apocalypse retains a strange Saturday morning comfort in our ability to grasp its binary notions of flashbang before-and-after speaks volumes about our current ennui in the face of the more banal horrors of eroding systems and creeping climate. It was the cool apocalypse. The fun Armageddon. Where muscular antiheroes strode an irradiated wasteland draped in loincloths and shoulder pads with an aesthetic that was part steroids, part Motley Crue and all Reaganite resistance to reality.

Oh yeah, and it had mutants.

If other recent indie RPG Neurocity represented a more sober Orwellian take on our grim potential future, then NEON LORDS OF THE TOXIC WASTELAND by Brian Shutter (with rad Oldhammer art by Mustafa Bekir) is by contrast all Mad Max, direct to video Salute of the Jugger, Megadeth album art with a dash of The Warriors. This is not the harrowing post nuclear vale of the BBC’s THREADS. This is Thunderdome on too much Pepsi. Wrestlemania via Repo Man. Urban decay and wasteland chic. Fallout on an all junk food diet. And as such, whether consciously or not, it seeks to wrest some kind of weird comfort from the winds of plague and vertiginous stock ticker spikes, transmuting them through that 80’s lens into a rusted dustbowl where we can actually have fun as we all die horribly. 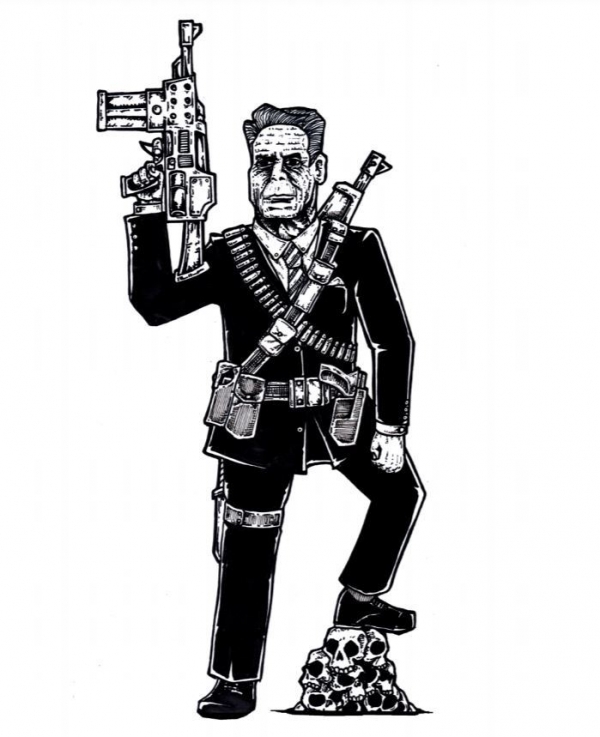 Nominally based on the venerable D&D Basic/Expert rules, Neon Lords takes this rusted yet reliable old chassis and bolts on a shitload of cool chaos in the form of a DCC/MCC indebted plethora of random tables, and a set of thematic mechanics that nudge players further into its world, as they embody the swaggering badassery so beloved of the retrofuture it is heavy lifting to evoke.

I mean, Gamma World was cool and all, but did it have hairstyle modifiers?

Character creation is a familiar affair for the most part. 3d6 for stats- Burliness, Prowess, Endurance, Attitude and Brains. Also- Sleaze. Of course.

If ‘Attitude’ is the charisma analogue representing your cocky swagger, then Sleaze represents your anti-charisma, your weird Gordon Gecko, Vince Neil appeal. For when you want to impress terrible people by being a terrible person. A true virtue in an 80’s indebted milieu. Fortune points are basically DCC/MCC’s ‘Luck’- a burnable resource you can use to bolster your rolls at the perils of the ‘bad luck’ table should you power through them all, and on top of this, each class has a specific class-based ability score that represents their particular affinities which can be frittered way in a similar ‘spellburn’ style affair. This has always been a cool mechanic, adding both mitigation, agency and a risk/reward component to encounters that can also plant the seeds for some whacky roleplaying when shit goes south, further delineating the tentpoles of each class. 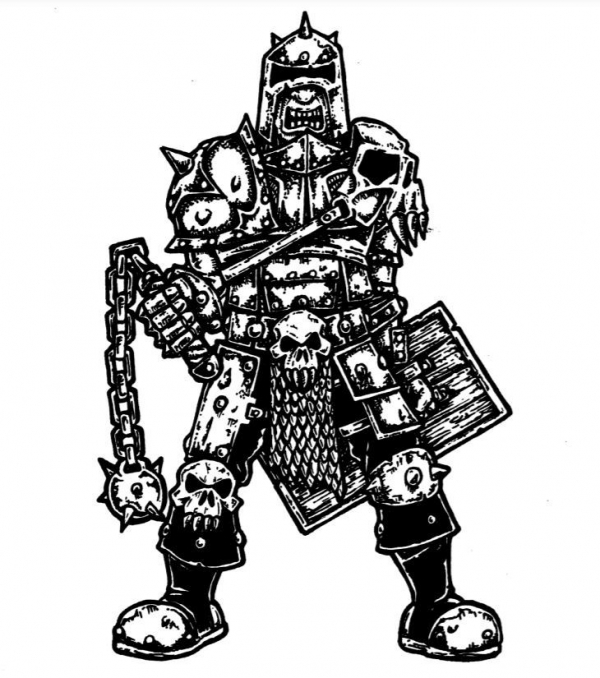 Holy Smiter, you’ve been down too long in the Midnight Sea

As befits Neon Lords’ OG origins we’re in Fighting Man, Magic User, Cleric, Thief and ‘Race as Class’ territory here, but even these stolid standbys are given a fresh lick of rusted neon paint and pixie stick, kool-aid sugar rush makeovers, emerging ripped as shit and cackling maniacally as the Death Bringer, War Wizard, Holy Smiter, Cosmic Barbarian and Dwarfling – each of whom come out swinging with their own set of RAD ABILITIES ™.

Hot salty flavour is the order of the day here, with titles such as ‘If it Bleeds’, ‘Death Growl’, ‘Juiced Out’, ‘Urge to Purge’ and ‘The Devil’s Crit’ letting you know the kind of action you’re in for.

And hell yeah is this thing predicated on action. The included sample adventure ‘The Last Outpost on the Left’ has an encounter in EVERY ROOM. It perhaps goes without saying at this point, but this is not a game where you’ll be crafting elaborate backstories and engaging in political intrigues whilst your characters undergo a redemptive moral arc. This is the kind of game where you’ll be harnessing the powers of chaos and the rusted detritus of a blasted wasteland to kick ass and look cool doing it.

Your allegiance to a set of values is of far less importance than your choice of either Mullet (+1 to attitude score) or ‘Flock of Seagulls’ (add or subtract 1 on the ‘drug effects table’). Oh yeah- there’s a drug effects table. There’s also a critical hit table that can make your foe shit their pants. AWESOME. 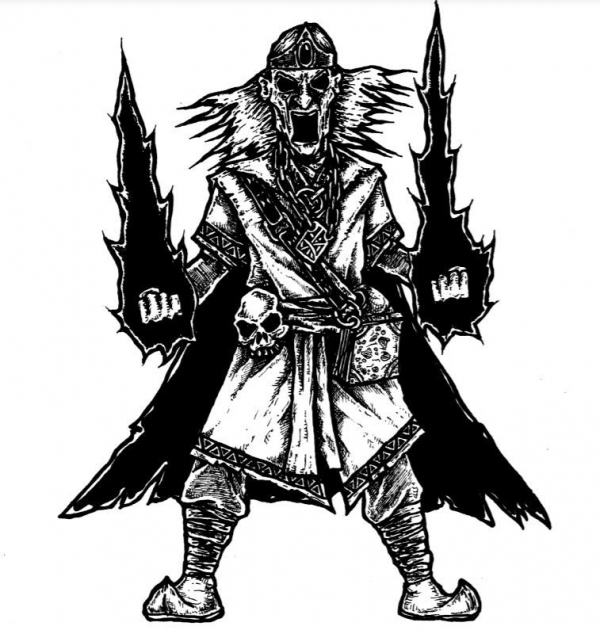 You didn’t inject all those expired steroids to take an origami class right? You came to cleave skulls, and you’ll be doing so in the traditional dice chucking, spell-flinging, corpse-looting fashion that you’ll slide into like a comforting pair of acid wash jeans. Roll initiative, roll vs AC, roll damage, roll on the critical hit or fumble tables. This is the fun bit. Like DCC/MCC before it, Neon Lords positively revels in the chaos and emergent storytelling inherent in its crit tables, (here, awesomely titled ‘TO THE MAX! tables) and each class is gifted its own specific selection of rad, fucked-up outcomes from which the following are only a handful of its gonzo selections:

It’s all wholesome shit. Couple these with the Fear tables, the Mutation tables and the Bad Luck tables and you have enough chaos at your command to spice up even the 10th rote bout with rampaging marauders seeking the ‘divine spark plug of Mytsubishi’ or whatever.

It is here however that the limitations of the tome become apparent.  With the exception of some cool-as-fuck outliers such as ‘Necrotic Regurgitation’ and ‘Oblivion Gleam’ the selection of spells is pretty generic, the bestiary is pretty slim and the world-building is somewhat anaemic. But again, this thing isn’t aiming to be a deep and intellectually tickling affair. It does however have a table for kicking in doors modifiers, so there’s that, right? You want fancy book-learning and mechanical nuance then you came to the wrong place, Poindexter. Neon Lords doesn’t have time for your crap thesis on the 80’s as cultural touchstone. It came to one-shot, blood-clot, full-throt. Let’s rot! 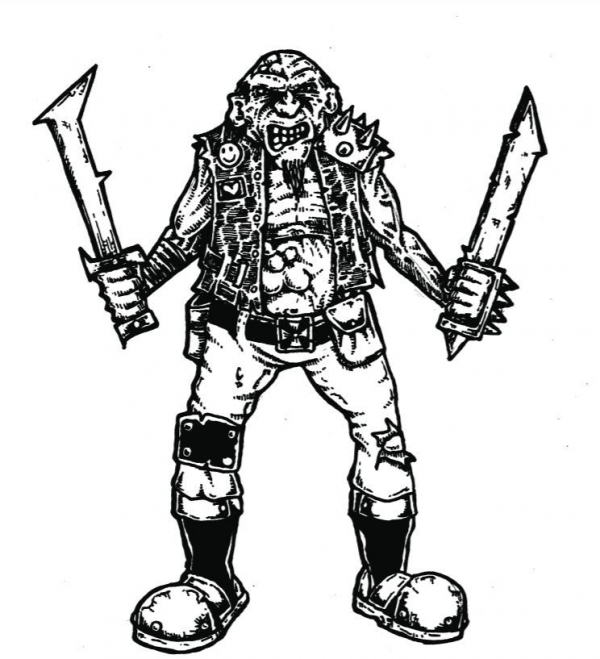 Take it for what it is, embrace the teachings of the Great Randy Savage and flex bad juju cut with bath salts and this might be your ultimate beer and pretzels game. The lack of a fleshed-out world is hardly a dealbreaker when it treads upon such hallowed public domain, as it’ll take your group all of eight seconds to grasp the vibe being thrown down here. Shit is grim, but shit is glamorous.

Strap on your sawn-off and pop a sick mono on your juiced-up hog as you back-flip and spin-kick your way through hordes of fugly aberrations to the tune of a widdly-diddly shred solo. Then fix your hair as you stride away from the blast, never looking back. Cos you’re Neon, baby.

Neon Lords of the Toxic Wasteland hits Kickstarter in November.

This review was based on the free Playtest version distributed by the authors. The full Core Rulez available soon via kickstarter are purported to contain a shitload more of everything. More classes, more spells, more setting and over 100 monsters. So stick that up your jumper.

Shellhead replied the topic: #315402 21 Oct 2020 11:16
I wish this game had existed when I was a teenager, because my original gaming group would have loved an outrageously nasty version of Gamma World. I could still see having fun with an occasional one-off in this setting, but don't think that I could run a sustainable campaign with it.

Shellhead wrote: I wish this game had existed when I was a teenager, because my original gaming group would have loved an outrageously nasty version of Gamma World. I could still see having fun with an occasional one-off in this setting, but don't think that I could run a sustainable campaign with it.