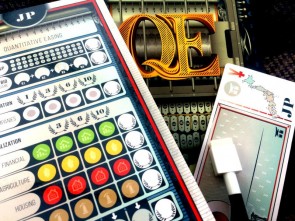 Set against the background of the 2008 banking crisis, in Q.E. you take on the role of a national government trying to avoid the collapse of global markets. You try to inject money into the economy by bidding for companies from around the world. There are no limits as your central bank can print as much money as you need. You basically have a blank cheque to pay as much as you want for the most valuable companies that come up for auction.

Of course, the theme is really only secondary here. The bids are not for specific companies, but for tokens that represent a combination of country, industry type and a victory point value. When you win a token, you decide which of the three to score. If a token is for the country you represent, then you get a certain number of victory points, while industry types give you more points the more you have of each or the more different ones you have, and the victory point values themselves range from 1 to 4, where 4 is a fairly decent amount of points, but 1 probably not worth very much.

The scoring part itself is actually relatively straightforward. It's usually obvious which of the three different properties of a token you want to use for scoring. It's rare that you struggle to decide what to tick off on your dry-erase board.

It's the bidding that makes this game so interesting and fun. Every round a different player is the auctioneer, which basically goes clockwise around the table. The auctioneer draws the next token and reveals it to everyone, then openly writes down a starting bid. The other players now have to decide how much the token is worth for themselves, writing down their bid secretly and passing it to the auctioneer. Once all bids have been submitted, the auctioneer reveals who made the highest bid, but doesn't say what the highest bid actually is, unless nobody bid higher than the auctioneer themselves of course. The highest bidder gets the token to add to their score.

Now, as I mentioned at the beginning, there are no limits in the game. Everyone can bid whatever they want. If you really want a certain token, or really want to prevent someone else from getting that token, you can bid an incredibly high amount to ensure you win the bid. The problem is, at the end of the game, the person who bid the most in total is out of the game. So you do have to keep track of what's been bid so far by everyone to decide how high you can go without pushing yourself over the edge.

It becomes an interesting tool in the game actually. You can intentionally bid a stupidly high amount to get a valuable token, which can open up the floor for others to also bid high, creating a sudden spike in bids from everyone, as long as you're the auctioneer, so people can see how high you've gone.

Q.E. is a really exciting blind bidding game, with a small element of social deduction, as you're trying to work out how much others have bid to win the company token. You're never exactly sure how high you can go, but you also know that you can really push others into bidding higher and get away with a low bid. The more you play Q.E. with the same people, the more the game will change.

October 22, 2020
Rating
4.0
Q.E.
Q.E. is a really exciting blind bidding game, with a small element of social deduction. The more you play Q.E. with the same people, the more the game will change.
O
oliverkinne Top 50 Reviewer 47 reviews

I've never played the game, but I thought it was an interesting discussion. Dunno if opinions around this coalesced or not.

There's a "bad actor" issue with this and other titles as well that makes those games fragile. They can be played, but certain players simply aren't going to be able to stay within the lines of polite play.

My oldest son is one of them, so I don't mean to imply that these people are simply dicks that are to be shunned. But if he sees a best practice that breaks a game he won't lay off it, and if I press him to he'll simply choose to sit the game out. The idea that there's a way to win within the rules that he's not allowed to use makes the game pointless to him, frustrating to play. He's such an engineer.

My issue with the QE name is that this isn't really what Quantitative Easing is about. They could have as easily named it Stock Market and it would have been equally descriptive, and equally wrong. I haven't played personally, but the descriptions seem to resemble more of a bank bailout kind of paint job than the self-purchasing of one's own bond offers.

It's my opinion that the game would be much tighter if there was a need to be within a certain delta percentage of the lowest total bidding player, even if that percentage were extreme. That would put every player at the table in a much more powerful position, would make for a much tighter binding on the play. I'd love to hear the results of plays where you need to be within, say, 100,000% of the lowest bidder's total bids to be eligible to win.

Ah_Pook replied the topic: #316201 16 Nov 2020 14:45
I like QE conceptually, but find it frustrating to actually play in the end. If you tacitly or explicitly agree to play in a fun/rational way it's fine, but at that point I'd much rather play High Society and just not have to worry about skating around potential degenerate game states.

oliverkinne replied the topic: #316842 04 Dec 2020 10:15
Thank you all for your comments. I think Q.E. needs to be approached light-heartedly and without lots of competitiveness. I'm sure there are ways to break the game, but if you see it as a bit of fun, I think it works really well.

The designer says it was designed concurrently, and plays out differently since the rules outside the central bidding mechanic are different. Still weird though. Also once you know the winning bids you're basically just playing High Society without the set bidding cards, so like..
why not just play High Society? I would certainly try it out if someone else has a copy though.
Read More...