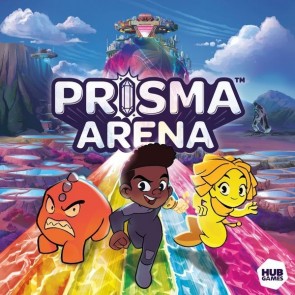 You gotta have heart.

When I asked the good folks at Hub Games for a review copy of their delightful deckbuilder AdventureMart they also offered a preview copy of Prisma Arena, which is just now hitting preorder. Looking over the brightly colored rulebook and other materials, it looked appealing – sort of a cross between Stephen Universe, the Pixar film Inside Out, and an arena battler. Having played it with my kids, who are squarely in the target demographic for a game of this description I’m happy to report that Hub might have another hit on their hands, particularly if it can break through to older kids and preteens - I think this age group is just going to love this thing.

The copy I played is an early production sample but it appears to be complete and I feel safe in evaluating the components as indicative of what a buyer might expect. And it’s a fun production. There are no junk miniatures to clutter it up or elevate the retail price ($40)– it’s all standees. But the million dollar idea here is that the standees are customizable with Colorforms-like removable decals. So your personalized character can have a unique uniform, hairstyle, expression, and accessories. Who in the world would not be absolutely delighted by this? The stickers all get stored in a special locker folder for each character so you can mix and match as players level up over the course of several games – yes, it’s kind of a campaign thing. Everyone is trying to get to Level 4, when the full game and all of its features are unlocked.

Now, the storyline is that the characters are in training to become Guardians, a Lantern Corps-like fighting force dedicated to protecting “Hope in the Time of Despair”, so it’s all very contemporary. The game represents their training in Prismakata and in bonding with Mo’Kon, Pokemon-like companions that embody various emotions. Gameplay is introduced in a series of tutorial outings that work toward the players earning individual Prisma Powers for their custom heroes.

Rules are fairly simple – at its root, this is a grid-based skirmish game with card-based activations. So a lot of the core concepts are familiar and easy to explain if you’ve ever played any game of this type. But where it gets more interesting is in how the combo mechanisms work. Everyone has a triangular action selector with which they select basic Move, Blast, and Strike actions or they may turn the selection to a combo symbol – X or O. Players have a hand of cards with these symbols and you can chain cards that correspond to combo symbols until you run out of cards or the symbols stop matching up. I really like this system – it’s extremely easy to grasp and does not, like many combo-riffic games, require extensive card knowledge and comprehension to create effective and exciting chains.

I also like the scoring mechanism. Putting damage on another player means you put tokens of your color on their card, and when that character is “bounced” (there is no killing here), you get points based on how much damage you’ve done even if another players performs the bouncing attack. It incentivizes making sure you don’t just keep attacking one player, and encourages more interaction in the 3-4 player game.

Now, the Mo’Kon serve two functions. One is that the one you choose is essentially your emotion-based special ability. The other is that they are physically present in the arena and fight alongside you. I think it’s really neat that the abilities are grounded in real emotions (this is the Inside Out part) and not just described in fictional magic terms or whatever. It gives the game a real sense of heart and purpose, a feeling of being about something more than just anime-ish characters shooting energy beams at eac b h other in a rainbow arena. Certainly, it is all candy-colored fantasy, but at its core is something real and I think that resonates with kids looking for something to identify with rather than “faction A is battling faction B for reasons”.

I found the early games were not as compelling as the later games, owing to the fact that we were following the rulebook and learning through play so some of the richer material isn’t presented up front. Once things start to open up, there’s a good game here that is only enhanced by the natural asymmetry that comes from characters developing different Prisma Power builds, embodied by their unique standees. I’m not sure, at this stage, that this is a long term game – after playing through it, my kids weren’t really asking for it again and I myself felt like we had “finished” it. There’s a team option in there, but really once you are done levelling up it becomes a good but not quite exceptional skirmisher – the problem is that without those unique elements that you get to enjoy along the way, there are simply better games out there.

But, with that said, kids are fickle and folks that really get into this game might enjoy continuing on with high level battles indefinitely. And we may very well revisit it soon – even though skirmish games are a dime a dozen these days, there really aren’t any that target this age group and have a diverse, welcoming, positive, accessible, and non-violent agenda. Those are all qualities about this game that I think really set it apart from other contemporary titles – how many other “feel good” battle games can you name?