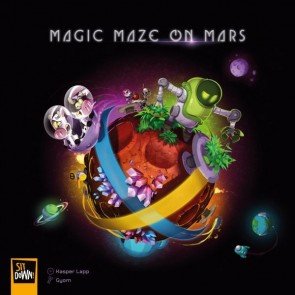 Game Name
Magic Maze on Mars
Publisher
Sit Down!
There Will Be Games

I start Magic Maze on Mars in the worst place possible: at the back of the rulebook. This is where the solitaire version of the game is, and it doesn't take long to find out that it clashes with the initial scenario. So instead I tempt the kids in with possibly-fair comparisons to other real-time co-op games that they love, like 5 Minute Dungeon. It does the trick, so we set to work.

In Magic Maze on Mars, we're robots trying to get the Martian surface ready for the arrival of colonists. This means building domes for them to live in. Each tile is crisscrossed with paths of different colours. Some also have a coloured factory area, which can be a little hard to spot, that generates resources of that colour. We, as players, also have a set of colours: two each at three players. It's our job to use factories of that colour and move along paths of that colour.

The first scenario is, of course, very easy. First, we have to explore beyond the initial tile by getting a resource to a tile-edge platform of a matching colour. Oh, how we laugh and joke at the simplicity! The new tile has a space on it where you can sacrifice a resource to flip the timer, once. And so we point out to each other, with a nudge and a wink, that we mustn't flip it too early else we'll end up with less time overall.

Further tiles reveal a dome construction site to which we must deliver three specified resources to make a dome. We guffaw at the triviality of this task! Dome built, a colonist arrives at the landing site on another tile. We then need to get it to the dome using coloured paths like it was a resource. With more scoffing and smirking we achieve this with a desert's worth of sand left in the timer.

What a ridiculous children's game. We stride, fat with confidence, into the second scenario, which punctures us like wheezing balloons.

The biggest addition in the second scenario is the terrifying phallic red pawn. It's so big, so red and so phallic it is the only component with a dedicated indentation in the box insert. The pawn says: no talking. No discussion of plans or strategy. Instead, if I think something needs doing, I must place the pawn in front of the player that needs to do it. And give them a meaningful stare, like Paddington.

The sand slides as we lock eyes and, slowly - slower than the sand grains - the penny drops. Shamefacedly, a resource gets placed on the board.

After that, things go a bit better for a while until we uncover the tile with the timer flip. Unlike its predecessor game, Magic Maze, Magic Maze on Mars comes with a board on which you can place the big, red, phallic pawn next to an action icon. It gives the other players a clue as to what you think needs doing, but at the cost of showing who you think should do it. This seems a nice dichotomy until we discover, later, that you can shuffle the pawn between player and board to offer both bits of information. So we have to ban that with an unsatisfying, fuzzy house rule.

Right now, someone moves a resource toward the timer flip and it's not even halfway down. So I put the pawn on the timer icon meaning to say "no" and of course the others take it as "yes" so the timer gets flipped early and we lose time instead of gaining it. There's no need to the "silent" rule any more by this point as we're all so furious with each other no-one would speak anyway.

We have to try again, at which point we discover the second scenario has a sneaky puzzle built-in. I won't spoil it for you but it does seem more than a little unfair a mere two scenarios into the game. Since we're now angrier with Magic Maze on Mars than we are with each other, we move on.

There are five scenarios in total in the game. That's a bit of a disappointment given there are quite a few in Magic Maze. Even more when you consider that the first two are training scenarios and all of them just add in a new barrier each time. Scenario three adds trash to the game, horrible black pieces that do nothing except clog up the board. You have to move them out of the way to get resources through. Since we failed the previous scenario - which is still a training scenario really - we have no chance. The surface of Mars is knee-deep in garbage by the time the last grains of sand trickle home and we explode into recriminations. 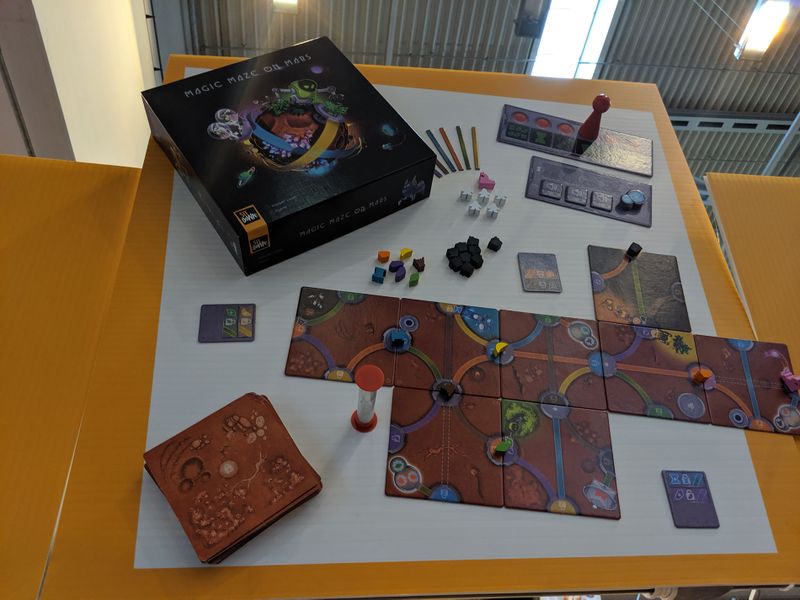 But they're fun recriminations. The game is relentless, frantic despite the silence. With a paltry fifteen minute play time, it's easy to get lost in the addictive loop of improvement. Even if it is illusory improvement and we keep on failing like the useless stooges we are. Magic Maze on Mars has a better theme than the original, and smoother gameplay. It's easier to teach and the elements better integrated. I'm not sure I care it has fewer scenarios. It's not like we can even beat the three we've tried.

As the kids give up, frustrated, I figure it's time to try those solo rules after all. They turn out to be somewhat peculiar. You get two tiles, each with half the colours but you can only use one at once. And you can only swap between them when a timer you set shows a zero at the end - every ten seconds, in other words. Scenario four adds Space Slugs to the mix, horrid turd-like pink pawns that block up the board like trash. Except instead of merely stopping a resource from passing, they eat it.

Trying to concentrate on getting my resources where I need them while watching a clock proves impossible. Literally so: you cannot watch the board while also glancing up, hoping for a zero on the timer. This is so frustrating that when the game ends, fast, in a sticky mess of engorged Space Slugs, I have to reset it and play it by ear. Instead of watching the zero, I rule, I can only move it once in a ten-second block. This proves more manageable, but it doesn't help me manage the slugs.

In games since the kids and I have managed the trash, but not the slugs. There's a fifth scenario which adds one-way lanes that we haven't dared try. The rules end with an option for increased difficulty, which seems so absurd as to be funny. But that fifteen-minute learning loop, that little grain of mastery that falls along with the last sand of failure, is a wonderful thing. One day, maybe, we'll get the slugs and after that, who knows? In a world where games see the table once and get forgotten, the way Magic Maze on Mars rewards practice and patience is a fresh breath of Martian air.

October 25, 2020
Rating
4.0
Magic Maze on Mars
Fixed-time co-operative games are an old formula by now, but Magic Maze on Mars does an excellent job of condensing it into a simple yet satisfying package.
MT
Matt Thrower #1 Reviewer 286 reviews