Seasons of Rice Board Game Review

Master of Puppies: A Pavlov's Dog Board Game Review

It's a knife! It's a tank! It has umlauts! It's KnifeTank: The Shüffling! 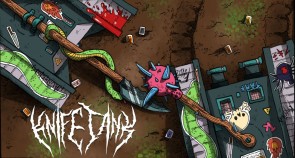 Game Name
KnifeTank: The Shüffling!
Publisher
Doctor Popular
Players
2 - 4
There Will Be Games

Are you tired of sprawling games crowding your shelf and your psyche? Are you even more weary of games that squander the opportunity to add awesome superfluous umlauts to their title suffixes?

Then mister, have I got a game for you.

It slices, it dices, it fits right in your pocket. It has more borderline rulings than playing 40K with a dude in an eyepatch. It’s Knifetank: The Shüffling! And it’s trundling your way. 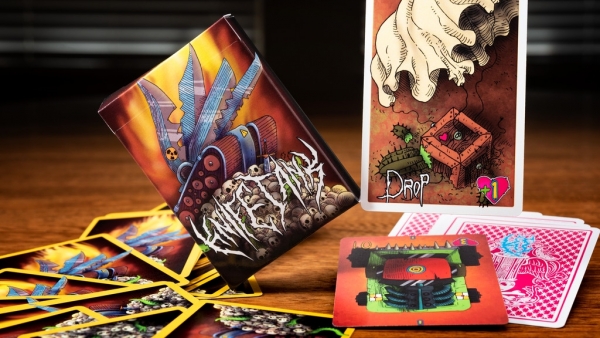 World of Tanks got you down with its predatory need to accumulate miniatures and startling lack of studded mace and/or flick-knife based ordinance?  Do you baulk at Memoir 44’s boomer-engorging vanilla historical dressings? Does Uno fail to thrill with its paucity of potential for stab wounds?

If you screamed “yes! Oh God yes!” to any of the above then Doctor Popular might just have the right prescription for your next tabletop fix.

Arriving in a box of surprisingly manageable dimensions at the same time as the latest Awaken Realms behemoth ‘Etherfields’ landed on my doorstep, Knifetank allowed for a pretty pervasive lesson in contrast as I was confronted by both the prog rock and punk spectrums of the industry in one fortuitous afternoon.

Both prospects set me all aflutter – but guess which one I’ve played three times already?

You Stabbed My Battletank

Part strategic hand management affair, part gonzo dexterity game- Knifetank is the epitome of small box throwaway fun. The work of the singularly demented Doctor Popular, in the grimdark future of Knifetank, there is only war. War and cool heavy metal fonts.

A singular deck of playing cards and a near postage-stamp sized rulebook is the entirety of what you’ll receive when you sign up for the proud ranks of the Knifetank Corps, a realm where war is hell but it comes with rad artwork.

Two to four swiss army generalissimos will face off in an attempt to either stab their opponents into oblivion or reach the opposite end of the table with their tank intact, all the while beholden to the wilful winds of fate as the draw deck conspires to stutter your advances, and a fudged flick, drop or blow can send your mechanised cutlery drawer teetering into oblivion. 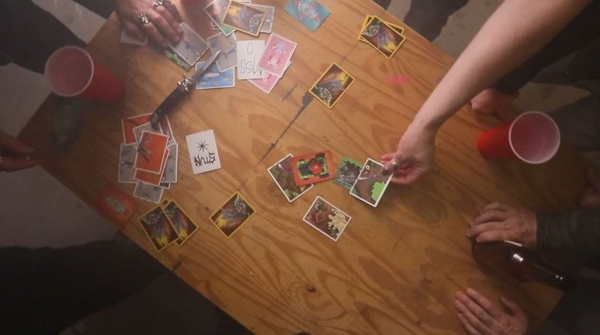 In order of magnificence they’ll then either move, stab or perform a special action, which is where the games dexterity elements come flying cack-handed into play.

Inked upon each awesomely illustrated card, every titular tank comes with its own turret and turning circle, helpfully indicated by markers on their representative rectangle. To move or unleash bladed hell, one aligns the corresponding markers on their activation cards, laying them down atop the tank and either adjusting their positioning or measuring their assault as a result. 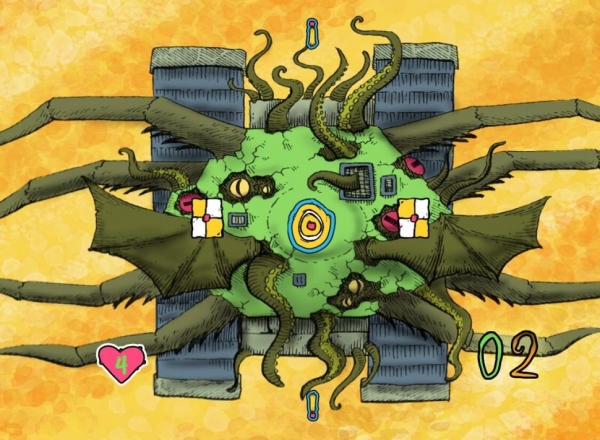 Get your Tank off my Lawn

Whilst this is a remarkably simple and intuitive system, the results are wont to be…imprecise. If you’re playing this thing with the kind of opponent who gets all heated and pernickety about lineball rulings in skirmish type affairs it may escalate to swearing, fisticuffs and the colourful maligning of your mother’s virtue. But why would you play with those kind of assholes anyway? The fate of the universe is not resting on the outcome here. The fate of your afternoon however is entirely dependent on your ability to embrace the spirit of the game being laid down. The spirit of a game called Knifetank. You get it right?

Further gleeful imprecision is thrown into this particular bubbling cauldron by way of the special actions that call upon players to drop, spin, flick or blow their cards onto the field of battle/kitchen table. These interludes tend to have all the grace of a pissed up gorilla but can lead to some of the most satisfyingly unbalanced gotcha moments or cataclysmic fuckups, as you bruise your cuticles on the edge of the table or send wads of expectorate arcing in a dismal spray rather than finalising that crucial pincer-movement you had envisioned. Hints of nuance are present in the appearance of mines or repair kits that can be dropped into (hopefully) strategic positions atop the battlefield, adding further strategy as players marshal their scant hand of directional options to best navigate the playfield. 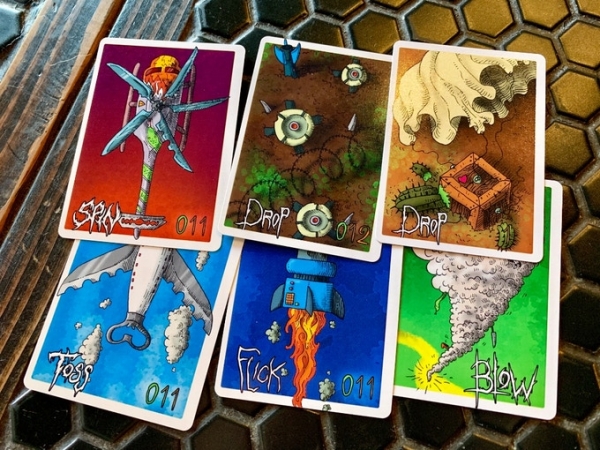 Dusted in around twenty minutes, each bout commences with a coy advance of sorts, and if the first few turns feel unremarkable its only because they’re busy sowing the chaos and tightrope trajectories of the game’s concluding arc. As your opponent crowds your space and the opposing table edge draws near, there is a remarkable tension to the juddering pragmatic ballet that ensues as each player wrestles with how best to maintain even a perfunctory plan let alone outmanoeuvre their opponent with any kind of practiced and deliberate grace. Contingent response is the order of the day here and as it comes down to the wire, you’ll be near to agonising over your decisions as you grin ruefully with each unfolding response. It’s not too agonising, mind – this game is called Knifetank dude.

That 20-minute tussle will tumble by really swiftly too, and its only moments before you’re either returning to the fray for a rematch, or tucking the slim box back into the rear pocket of your dirty denim so you can ride into the sunset on your skateboard adorned with a grinning cobra or some shit.

Whilst more variety in terms of your range of attack options and battlefield terrain features would have been appreciated, there is a quick and dirty ethos of simplicity at play here that wins in its slimline charm.

It's a compression blast. I dug it.

And if you grab a copy, the next time some dude regales you with a tale of their epic eight-hour bout of Twilight Imperium, you can say “yeah man, I was busy playing 23 games of Knifetank!” Then they’ll say “what the fuck is Knifetank?” And you’ll grin enigmatically before doing a sweet handlebar spin wheelie on your BMX. 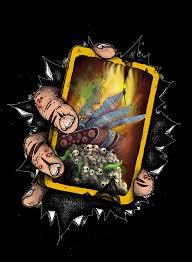 There are no user reviews for this listing.
Already have an account? Log in now or Create an account
Discuss this article
Log in to comment
Posts in discussion: It's a knife! It's a tank! It has umlauts! It's KnifeTank: The Shüffling!

bfkiller replied the topic: #315936 04 Nov 2020 21:55
I bought KnifeTank recently as more a throw in since I was already paying shipping on House on the Borderland. Looks unique and fun, but not exactly COVID friendly. I'm looking forward to trying it, but will hold off until case counts go down in my city before blowing towards my opponent.

bfkiller wrote: I bought KnifeTank recently as more a throw in since I was already paying shipping on House on the Borderland. Looks unique and fun, but not exactly COVID friendly. I'm looking forward to trying it, but will hold off until case counts go down in my city before blowing towards my opponent.

Oh shit yeah I didn't even think about that. Not the timeliest of mechanics is it? Maybe just proxy in a leaf blower or something? You'd need a fucking big table, mind.

jason10mm replied the topic: #315945 05 Nov 2020 09:23
I don't usually (almost ever, really) ask for a video of gameplay rather than a fun written description, but in this case I think I need to watch something because I can't figure out what you are talking about

Ok, ok, I watched this one ( laughingsquid.com/knifetank-the-shuffling/ ) and while the gameplay is still a little questionable the sheer awesomeness of this game trailer(?) is worth a purchase

jason10mm wrote: I don't usually (almost ever, really) ask for a video of gameplay rather than a fun written description, but in this case I think I need to watch something because I can't figure out what you are talking about

Ok, ok, I watched this one ( laughingsquid.com/knifetank-the-shuffling/ ) and while the gameplay is still a little questionable the sheer awesomeness of this game trailer(?) is worth a purchase

Yeah the trailer evokes a lot of the flavour and mindset that is key to the appeal. Mechanically it's spatial awareness and hand management whittled down to a shiv with some dexterity shenanigans thrown in. There's not a great deal to enunciate depth-wise. Essentially your cards determine the trajectory of your tank, the distance and direction it can travel and the arc and reach of its possible attacks. These are all determined by physically placing them atop the relevant turn/turret icons on the tank card itself upon the tabletop. There is an additional deck where damage is drawn at random based upon the relative strengths of the tank or card played. It's all really quick to pick up, quick to play and quick to get silly. KNIFETANK!

DocPop replied the topic: #316034 09 Nov 2020 13:13
Thanks for this great review. I dug the way you described the game as "Part strategic hand management affair, part gonzo dexterity game- Knifetank is the epitome of small box throwaway fun." proving once again that game-designers can never describe their own games as well as everyone else can.

DocPop wrote: Thanks for this great review. I dug the way you described the game as "Part strategic hand management affair, part gonzo dexterity game- Knifetank is the epitome of small box throwaway fun." proving once again that game-designers can never describe their own games as well as everyone else can.

Hey Doc, thank you for a great game! We got in a few more runs this past weekend. It was an awesome palate cleanser after a session of 'The Quiet Year' and I gotta say it's even better/wilder at four players. Extra star if playing at four for sure. Gonna be a gameday staple.
Read More...