Seasons of Rice Board Game Review 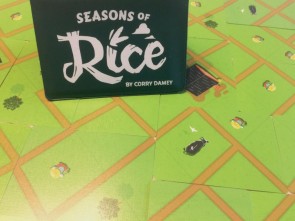 The seasons began again. We had to build our rice paddies, fill them with water, plough them with our buffalos, plant our rice and wait for it to grow. We had to be clever about how we divided the land to make the best use of the most fertile soil. We also had to have enough help to get the harvest in, but overall, we had to be patient and wait for the end of the Seasons of Rice by Button Shy.

It's the first wallet game I've ever played, but I already knew that Button Shy's series of 18-card games was going to be something special. Games that come in a small form factor are pretty much always of special interest to me, in particular, if they come with very limited components, in this case just 18 cards and a rulebook. It's always exciting to see how much game can fit into these very tight restrictions and how hard every component was made to work.

In the case of Seasons of Rice, every card is different and both sides perform a different function. The paddy field side shows the edges of fields as well as either rice farmers, buffalos, farm houses, trees or a combination of them all, while the other side shows an ancestor, which is basically another and unique way of scoring additional points, as well as having a point tracker along two edges. You do need to provide your own tokens to keep score, but small coins, paperclips or even matchsticks all work well. Of course, you can keep score on your smartphone, if you prefer.

What makes the game so interesting are two things. First of all, the game consists of two phases. During the first you choose two cards from your hand, one to play, the other to go into a card offer row, and then pass your hand to the other player. It's the classic form of card drafting we all know. In the second phase, players take turns and chose one of the cards that were put into the offer row in phase one.

It's a lovely way of using these quite simple mechanisms in an interesting way. It's never easy to decide which card to play into your paddy field and which to put out for the next phase. You almost want to keep them all or at least you don't necessarily want cards to be accessible by the other player. You do have to sort of plan ahead a little and hope that the cards you put out in phase one will still be there for you in phase two.

The other part that makes Seasons of Rice so interesting and fun, is how you play cards. It's a bit hard to describe, but you can play cards in portrait or landscape mode and you have to line them up edge to edge. So if you place a portrait card next to one you played in landscape orientation, only half the edge of one will be lined up with the other card.

Also, you need to ensure that the paddy field boundaries are lined up with each other, when you play cards. The thing is, boundaries are actually printed on the card diagonally, creating a sort of isometric view of your paddy fields, which looks lovely, but does mess with your head a bit. You're constantly trying to rotate your card 45 degrees to make the boundaries look straight. However, once you've played a few rounds, it gets easier.

The main aim of the game is to create fully enclosed paddy fields, that is, fields that have a boundary around them on all sides, while at the same time trying to make the fields as large as possible. You also want to get rice farmers, buffalos and houses into your enclosed fields too, if possible, to get even more points. It's a bit like playing Carcassonne, except that there are only 18 cards, two of which are your ancestors, which give you additional ways of scoring, leaving 16, only 8 of which will make up your paddy fields. So you do have to work quite hard to create lots of paddy fields with only eight cards.

The game is over very quickly, but you do want to play it again and again. It's actually quite thinky, because of the limited amount of cards that you have to play, but not too taxing to tire you out. It's actually an ideal game to play while you're out and about. It does use up a fair amount of table space, but if you're in a pub or restaurant, you should have enough room. It also plays quickly enough, so can be played while you're waiting for your food to arrive.

If you want a two-player game that you can easily take with you, then Seasons of Rice is definitely worth checking out.

November 04, 2020
Rating
3.0
Seasons of Rice
If you want a two-player game that you can easily take with you, then Seasons of Rice is definitely worth checking out.
O
oliverkinne Top 50 Reviewer 47 reviews

dysjunct replied the topic: #316394 20 Nov 2020 21:47
The game sounds interesting enough, but the title sounds like a eurogame parody, second only to Milch und Gherkin.