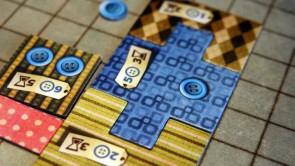 We were sitting quietly at each end of the sofa in the living room, fully engrossed in our needlework. It was so relaxing to use our hands and make something. Arts and crafts. That was the way. We looked at each other for a moment, seeing the contentment in each other's eyes. I reached into the bag to pick out another piece of material to add to my quilt. It would look all higgledy-piggledy, but that was fine, because I was aiming to create a Patchwork by Lookout Games.

Here is another game I only ever played digitally, which is why it's in the Digital Eyes category of reviews on this blog. The advantage of the digital game is that you can either play it with another person, or you can play against the AI, which can be set to a number of difficulty levels as well, so that you can ease yourself into the game. The other advantage of the digital version is that you can learn the game that way, without having to read the rulebook, which is always nice. I prefer learning by doing, so this works for me really well.

Patchwork is a tile-laying game using polynomial shapes. The idea is to complete your 9x9 quilt using the patches. The fewer gaps your quilt has at the end, the less points you lose at the end. You gain points by collecting buttons. Different patches have a different number of buttons on them, some even have none. So far, it's your standard Tetris-inspired game.

However, there is much more to Patchwork of course. What makes the game stand out and what creates the excitement and strategy element is the turn order mechanism. When it's your turn, you can choose one of the next three patches in the offer row, which is arranged in a circle and which means that from the start of the game you can see all available patches and in which order they will become available.

Different patches not only have a different number of buttons on them, but they also cost different amounts of time to add to your patch, which makes thematic sense, but it's the time element that decides who goes next. There is a separate time track and as you buy patches, you will move along it a certain number of steps. It continues to be your turn as long as you're last on the time track.

So your decision as to which patch to buy will depend on the time that patch takes to add, as well as the number of buttons on the patch. Ideally, you want to buy smaller patches that take less time, so that you can continue to buy more patches, allowing you to fill your quilt more quickly than your opponent. However, sometimes the perfect patch that fills the really awkward gap on your quilt is what you go for, even if it means that you only get one go before it's the other player's turn.

The time track also decides when you get more buttons to add to your coffers. Buttons are the currency and the victory points in Patchwork, but only the buttons you actually have in your hand. The buttons on the patches in your quilt only indicate how many buttons you get paid out when you hit the relevant fields on the time track. So you do want to get as many buttons as possible into your quilt before hitting the first payout point, but you also don't want to forge too far ahead.

Speaking of neatly, if you're the sort of person who likes quilts without gaps, then Patchwork might drive you a little mad, because you will always leave gaps somewhere. However, for everyone else, Patchwork is a wonderfully calm game with just enough excitement and just enough forward thinking required to allow you and another person to have a lovely time.

November 11, 2020
Rating
3.0
Patchwork
Patchwork is a wonderfully calm game with just enough excitement and just enough forward thinking required to allow you and another person to have a lovely time.