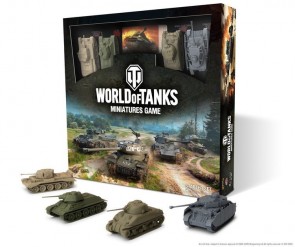 I love tanks, but I do not give a rat’s ass about which model of Panzer had which turret, what year the Sherman entered production, how many of which tank was at Alamein, who would win in a fight between a Wolverine and an M1 Abrams or any of that other historical trackhead crap. I also do not particularly care about re-enacting the Battle of Kursk or whatever, nor do I care about emulating, simulating, or representing anything that Nazis did in WWII. But yeah, if you put miniature tanks on the table and I just can’t help myself. Gale Force 9 has just put some pretty damn good miniature tanks on the table in what is sort of revision or reboot of their Tanks game, which was a pretty crackerjack light miniatures game cut from the same cloth as Wings of War or X-Wing. This time branded as a tie-in to the popular World of Tanks online game, which sees everything from 1920s Polish tanks all the way up to 40k Predators. And I am definitely here for it.

World of Tanks is very much a fun-first, minimal fuss miniatures game that plays best casually. The tanks are pre-built (which they were not in Tanks) and even primed for your convenience and there really isn’t much of a need for any terrain models or accessories beyond the punchboard that comes in the starter box. It’s very easy to get a couple of tanks tooled up with upgrade or crew cards and play through a quick battle in less than 30 minutes. It’s the rare miniatures game that respects your time and doesn’t really require you to commit body and soul or go into massive debt to get the most out of it.

It's all extremely simple, to the point where those who are expecting any kind of a simulation might be brutally disappointed. Moreso than World of Tanks, the video game it really resembles is Combat on the Atari 2600. It’s a game about a couple of tanks – maybe 2-4 per side – trundling out and blowing the shit out of each other, with one-hit kills possible. I love that this is practically an Combat tabletop game.

Mechanics couldn’t be more basic. Initiative value is a factor, and it uses the exact same ascending movement/descending shooting scheme to account for a variety of factors in when a tank gets to act. Movement is as simple as using this cardboard pointing arrow and moving your tank along it, as long as you end up square with the arrow you’re good, which allows for some pretty versatile movement. One of the really cool things about the shooting mechanics is that speed is a huge factor in both offense and defense calculations. Move faster, and it’s both easier for you to avoid getting hit as well as harder for you to hit your own target.

When the big guns fire, it’s a dice pool system. Most medium tanks get 4 base dice, and maybe a bonus or two from upgrade cards (where practically all of the detail and complexity resides). The defender gets a basic Survivability rating’s worth of dice plus one for each movement step each of the engaged tanks took, and bonuses for being in cover (meaning the shooter can’t see all four corners of the target) or hull down behind an obstruction. But then there are also penalties to the number of defense dice, such as being shot from the side or rear so that means positioning matters. The defender rolls the dice to block hits, so it’s a an fun, contested roll mechanic. There are regular and critical hits, with the crits forcing a draw from a stack of damage cards. These cards may do nothing, could damage components on the tank, kill crew, double the hit or start fires. Some are repairable, so it’s possible for a damaged tank to stay in the fight. Others are permanent and since these tanks only take 4 or so hits, it doesn’t take long to blow one up.

In fact, it can be shockingly quick to explode one of these tanks. But that is how this game rolls – the action is quick and decisive, there is no turtling around or camping out on objectives. It creates a very cool kill-or-be-killed tone that quite frankly cuts through a lot of the dead time that occurs in many miniatures games. I love miniatures games, but virtually all of them are paced like American football- long periods of huddling around and planning, some push-and-pull then some explosive action before it's back to the huddle. But this game is like only the alpha strike phase, and I kind of love that about it.

There are some minor details, but it’s all extremely light, bordering on little more than common sense- like how a tank destroyer has a fixed firing arc and can only shoot what is in front of it. An array of upgrades might be hard to keep track of (especially if you are running highly tooled-up tanks), but that is kind of a season-to-taste thing anyway. I could totally see World of Tanks being a “first” miniatures game for a lot of kids, and in fact if I had this game when I was a kid it would have blown my mind.

I’m not sure that as a 45 year old grizzled adult with astronomical expectations that my mind is blown by it, but like Tanks before it I really appreciate the get-down-to-business nature of this game and I am wholly enjoying that it is a zero fuss, zero prep miniatures game. It’s just refreshingly free of any faff. There’ s no infantry, artillery, or historical accuracy to worry about. I love that it has the cool German tanks but you’re not even playing as the Germans, really. You can run T-34s, Cromwells, and STUGs together and it’s OK, only the grognards will judge you. And they probably won’t be interested in this anyway.

As for long-term prospects go for those who are feeling it, it looks pretty good. So far, there’s just the starter game (four tanks) and a wave of four expansions. The tanks are lovely 15mm scale models, and they are fairly inexpensive. From our games, we are feeling that 3-4 tanks per side is the sweet spot, and it’s actually pretty easy to run this as a multiplayer teams game. There aren’t a lot of options provided in the box for scenarios or objectives and the cardboard terrain isn’t really enough, but there again if you want that kind of stuff there are plenty of alternatives. Besides, if you haven’t gotten the memo yet, this game is about tanks – not farmhouses and bocage.